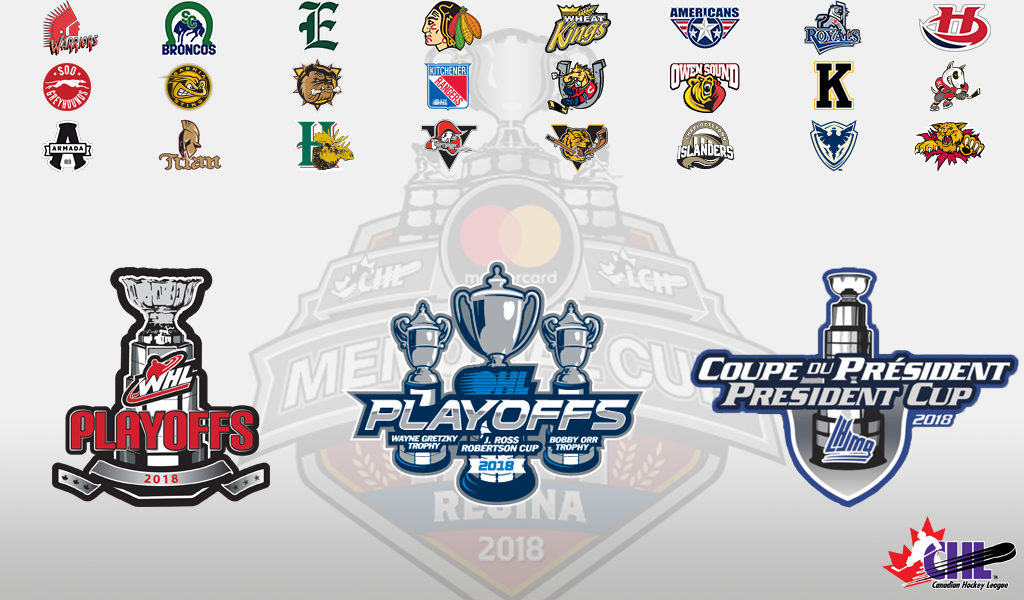 A wild first round finale in both the QMJHL and the WHL featured seven different Game 7 scenarios, leaving the Charlottetown Islanders, Sherbrooke Phoenix, Moncton Wildcats, Portland Winterhawks, Victoria Royals, Moose Jaw Warriors and Swift Current Broncos still standing along with 17 other teams from across the country.

Without delay, second round playoff action gets underway in the Ontario Hockey League Wednesday night as the Barrie Colts and Kingston Frontenacs embark on a closely-matched Eastern Conference showdown.

The Greyhounds match up against the Owen Sound Attack who made quick work of the London Knights, joining the Hounds in completing a first round four-game sweep.

The other Western Conference series pits the Midwest Division champion Kitchener Rangers against star forward Jordan Kyrou and the Sarnia Sting in a series that gets underway on Friday. 2017 Mastercard Memorial Cup champion Logan Brown, a first round pick of the Ottawa Senators, currently leads OHL Playoff scoring with 13 points (2-11–13) in six games. Brown has centred the league’s most dominant line in the playoffs so far as flanks Adam Mascherin (4-7–11) and Kole Sherwood (7-3–10) have also been prominent producers.

In the Eastern Conference the aforementioned Barrie Colts come off a six-game series triumph over the defending Eastern Conference champion Mississauga Steelheads. The victory didn’t come easy for Barrie as goaltender Leo Lazarev shone with a .925 save percentage while top NHL Draft prospect Andrei Svechnikov returned from suspension for games five and six of the series to push the Colts over the top. Across the ice, the Kingston Frontenacs claimed victory in the most thrilling game of the OHL Playoffs thus far, defeating the North Bay Battalion 6-5 in the third-longest game in OHL history. Los Angeles Kings prospect Gabriel Vilardi scored with 5:55 left in the third overtime of Game 6 to send the Fronts to the second round for a third straight year.

After eliminating the Ottawa 67’s in five games, the Hamilton Bulldogs will face the surging Niagara IceDogs who ended the season with seven straight wins before disposing of the Oshawa Generals in five games. Niagara had Hamilton’s number this season, winning five of the six encounters between the two clubs. The Bulldogs have been led by veteran centreman Brandon Saigeon (7-2–9) who sits tied for the league-lead in goal-scoring. Linemate Matthew Strome (2-8–10) has picked up eight assists in the process.

With the dust settled in the QMJHL, second round playoff action will get started on Friday as the Moncton Wildcats, the biggest surprise of the first round, will face a tall task in lining up against the Blainville-Boisbriand Armada (Friday’s Game 1 and Sunday’s Game 2 on Sportsnet 360).

Moncton shocked the third-place Rimouski Oceanic with a 6-3 road win in Game 7. Captain Nicholas Welsh had a goal and two assists while regular season scoring leader Jeremy McKenna picked up four helpers as the Wildcats now prepare to face the first-place Armada who took a four-game first round sweep of the Val-d’Or Foreurs.

The second-place Acadie-Bathurst Titan continue their march through the playoffs with a second round matchup against the Sherbrooke Phoenix who come off a Tuesday night Game 7 win over the Rouyn-Noranda Huskies. The Phoenix won their first playoff series in the six-year history of the franchise as Nicolas Poulin and Felix Robert both had a goal and an assist in a 3-1 road win.

On the east coast, the well-rested Halifax Mooseheads will tangle with the Charlottetown Islanders after the Isles claimed a big 8-3 Game 7 victory in Quebec. Overage forward Pascal Aquin scored four goals while blueliners Pierre-Olivier Joseph and Saku Vesterinen both had three assists as Charlottetown advances to the second round for a fourth straight year.

The Drummondville Voltigeurs and Victoriaville Tigres will clash in a series between two rivals located within an hour of each other. The two teams last faced each other in the post-season during the 2014 QMJHL Playoffs as Drummondville took the series in five games. Victoriaville’s Vitalii Abramov (6-5–11) comes off his second-straight 100-point season and currently leads QMJHL playoff scoring with 11 points in five games. The Tigres won three of the five encounters between the two clubs during the regular season.

The Western Hockey League second round playoff picture has taken full form after an eventful finish on Monday and Tuesday.

Elsewhere in the Eastern Conference the Lethbridge Hurricanes will hold home ice advantage against the Brandon Wheat Kings despite the wild card Wheaties boasting a superior 40-27-3-2 record. Brandon bested the Central Division champion Medicine Hat Tigers in six games while Lethbridge punched their second round ticket off a five-game series triumph over the Red Deer Rebels.

The U.S. Division-leading Everett Silvertips pushed past the defending WHL champion Seattle Thunderbirds in five games and will now face the division rival Portland Winterhawks in second round play. Goaltender Carter Hart earned Vaughn CHL Goaltender of the Week honours as he currently leads all netminders with a 1.97 playoff goals-against average along with a .938 save percentage and one shutout. Portland needed seven games to oust the Spokane Chiefs as Vegas Golden Knights prospect Cody Glass recorded a goal and two assists in a 3-1 Game 7 win at home on Tuesday.

The well-rested wild card Tri-City Americans took a clean sweep of the B.C. Division champion Kelowna Rockets thanks to big-game performances from Morgan Geekie (9-4–13) and Michael Rasmussen (5-7–12) and now prepare for battle against the Victoria Royals. Calgary Flames prospect Matthew Phillips scored twice as the Royals held on for a 4-3 win over the Vancouver Giants on home ice in Game 7. Phillips’ 16 points (6-10–16) are tied with Lethbridge’s Brad Morrison (6-10–16) for the most in the WHL Playoffs thus far as the Royals are headed to the second round for the fourth time in the past five years.

The second round of the WHL Playoffs gets underway on Friday with games in Lethbridge, Moose Jaw, Victoria and Everett.

Here’s a look at the entire CHL Playoff picture as 24 teams along with the host Pats remain on the road to the 2018 Mastercard Memorial Cup in Regina from May 17-27.