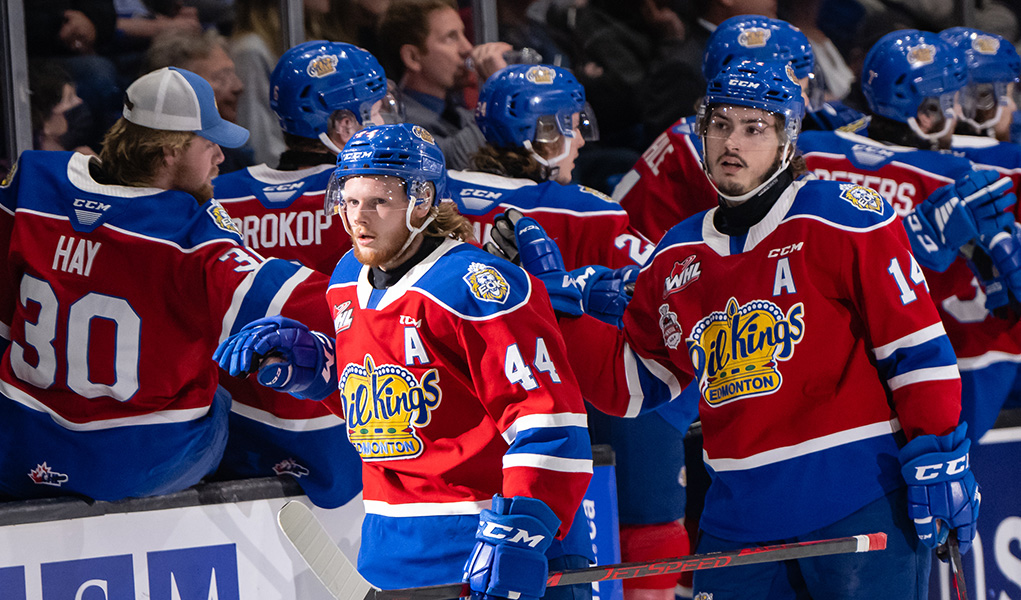 A dominant performance by veteran forward Jaxsen Wiebe helped guide the Edmonton Oil Kings to their first win at the 2022 Memorial Cup presented by Kia on Wednesday.

Scoring his first of the game just over two minutes into the initial frame, from the doorstep Wiebe slipped one by Saint John Sea Dogs netminder Nikolas Hurtubise before fellow forward Carter Souch added his first of the tournament soon after as part of a goal-filled first period.

Despite the early deficit, the Sea Dogs rallied for three-straight markers, first seeing Pittsburgh Penguins prospect Raivis Ansons scored his first goal and fourth point of the tournament before Josh Lawrence found the back of the net 25 seconds later on a delay penalty to even the score and bring the home crowd to their feet.

Not yet finished, the Sea Dogs added one more goal in the first period coming off the stick of New York Islanders draftee and QMJHL MVP William Dufour who fired a quick release by Oil Kings netminder and Detroit Red Wings first rounder Sebastian Cossa, beating him low glove.

The two sides then turned to their defensive game for the latter half, with just one more goal coming as Wiebe cashed in on a rebound early into the second period to even the score at three a side.

Requiring extra time for the first time in the 2022 Memorial Cup presented by Kia – and the first time fans have witnessed the 3-on-3 format in the year-end tournament – the two sides traded chances in the thrilling extra sessions before Wiebe secured his hat-trick 8:05 into overtime.

“Wiebe is a big part of our team,” Oil Kings head coach Brad Lauer said postgame. “He is a power forward. He is a guy who can skate and shoot the puck and do a lot of things. He plays a heavy game, works hard, and does the right things, and today he got rewarded for that.”

The 2022 Memorial Cup presented by Kia continues Thursday between the QMJHL champion Shawinigan Cataractes and the OHL-winning Hamilton Bulldogs.