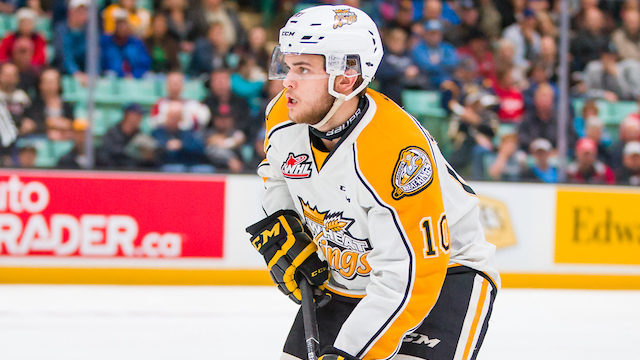 Toronto, ON – The Canadian Hockey League today announced that Los Angeles Kings prospect Kale Clague of the Brandon Wheat Kings is the CHL Player of the Week for the week ending October 8 after recording eight points in three games including five goals and three assists with a plus-minus rating of plus-9.

Clague recorded a trio of multi-point performances for the Wheat Kings who won all three games of their weekend Alberta road trip.  Starting off in Edmonton Friday night, the defenceman netted his first career hat-trick which featured an even strength, power play, and shorthanded marker, earning first star honours in the 7-3 win over the Oil Kings.  Clague was named first star again Saturday night in Red Deer with two goals and one assist in a 5-2 win over the Rebels, and finished the weekend with two assists as part of a 5-3 win over the Calgary Hitmen on Sunday.

A 19-year-old from Lloydminster, Alta., Clague is playing his fourth season with the Wheat Kings who selected sixth overall in the 2013 WHL Bantam Draft.  The second round pick of the Kings in the 2016 NHL Draft has produced at a rate of 2.40 points-per-game since returning from his NHL Camp collecting 12 points through five contests.  Clague was a member of Canada’s National Junior Team at the 2017 IIHF World Junior Championship and in just 48 games of WHL action last season tallied five goals and 35 assists.

Also considered for the award this week was Vegas Golden Knights prospect Nick Suzuki of the Owen Sound Attack with three goals and four assists for seven points in two games, and Anthony Poulin of the Blainville-Boisbriand Armada who recorded seven points in three games with four goals and three assists.