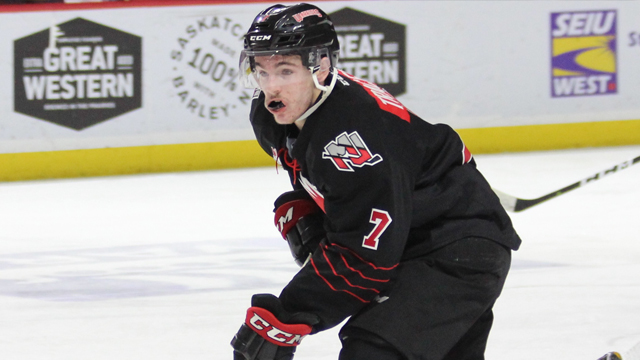 Toronto, ON – The Canadian Hockey League today announced that rookie forward Brayden Tracey of the Moose Jaw Warriors is the CHL Player of the Week for the regular season week ending February 24 with 11 points in four games including six goals and five assists with a plus-minus rating of plus-5.

Tracey recorded four consecutive multi-point games last week as the Warriors recorded three wins in four appearances to improve to a 34-16-6-2 record, good for third place in the WHL’s East Division. His week began Monday with a three-point night, including two power-play tallies as the Warriors fell just short of a comeback in a 4-3 loss to the top-seeded Prince Albert Raiders. The 2019 NHL Draft hopeful then followed up that performance four nights later with another two-goal effort in a 4-2 win against the Swift Current Broncos in which he was recognized as the game’s third star. On Saturday, Tracey was named second star after picking up another three points, including one goal and two assists, in a 5-2 victory over the Regina Pats. Tracey then closed out the weekend with another three points as he recorded one goal and two assists in Sunday’s 5-1 win over the Kootenay ICE.

A 17-year-old from Calgary, Alta., Tracey is starring in his first full season with the Warriors after appearing in five games plus two playoff contests a year ago. In 58 games with Moose Jaw this season, the first round pick in the 2016 WHL Bantam Draft has tallied 31 goals and 42 assists for 73 points, good for first among CHL rookies and third in team scoring behind fellow forwards Tristin Langan (45-51-96) and Justin Almeida (25-62-87).  He is listed 73rd among North American skaters for the 2019 NHL Draft in NHL Central Scouting’s Midterm Rankings.