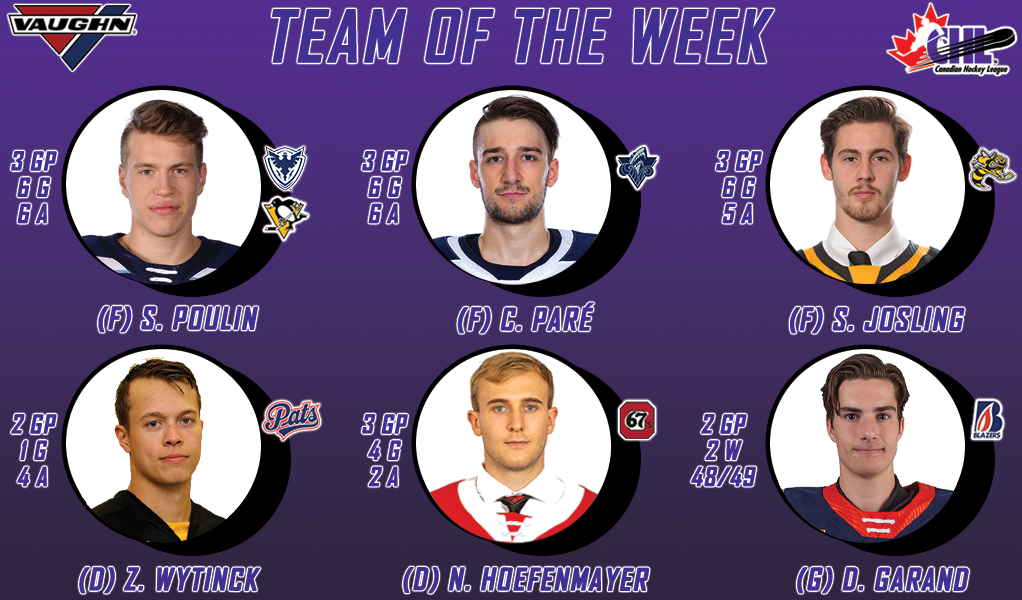 The Canadian Hockey League today announced the fifth edition of the Vaughn CHL Team of the Week for the 2019-20 season based on individual performances from Oct. 14-20.

The forward ranks are headlined by Sherbrooke Phoenix left-wing and Pittsburgh Penguins first-round pick Samuel Poulin, whose week concluded with 12 points counting six goals and six assists across three appearances. Poulin’s top performance came Sunday in a phenomenal two-goal, six-assist showing against the Shawinigan Cataractes that set a franchise record for points in a single game marking the first eight point game in the QMJHL in a decade. For his efforts, Poulin was named the Ultramar QMJHL Player of the Week.

Also up front is Rimouski Oceanic overage centre Cedric Pare, who matched Poulin’s 12-point output over three games also putting up six goals with six assists. Pare, who sits second in QMJHL scoring with 32 points on the season, is currently riding an 11-game point streak, with his most impressive performance coming in a six-point night against the Quebec Remparts on Sunday in which he finished with four goals and two assists to claim first-star recognition.

Sarnia Sting overage right-wing Sean Josling rounds out the forward ranks following a week in which he finished with six goals and five assists for 11 points in three games. That stretch included Friday’s five-point outing against the Oshawa Generals in which Josling claimed first-star honours after notching three goals and two assists to hand the first-place club its first loss this season.

Leading the way on the back end is Ottawa 67’s rearguard Noel Hoefenmayer, who put up six points counting four goals and two assists over three games. Hoefenmayer’s best performance came Sunday as the overager recorded his first career hat-trick, including the overtime winner in a 5-4 final versus the Hamilton Bulldogs to come away with first-star honours.

Rounding out the blue line is Regina Pats newly acquired defenceman Zach Wytinck, whose third and fourth appearances since joining the team from the Brandon Wheat Kings saw him register a total of five points counting one goal with four assists. All four helpers came in Saturday’s shootout win over the Red Deer Rebels, including a secondary assist on Austin Pratt’s game-tying goal with only 15 seconds remaining in the final frame to help the overage defender earn third-star honours.

Between the pipes, Kamloops Blazers netminder and 2020 NHL Draft hopeful Dylan Garand was nearly unbeatable over two appearances as he stopped 48 of 49 shots to find the win column twice and come away with a 0.50 goals-against average and .980 save performance. The stretch included Friday’s 23-save effort against the Vancouver Giants that saw Garand notch his first shutout of the season, helping him claim WHL Eli Wilson Goaltending Goaltender of the Week honours.