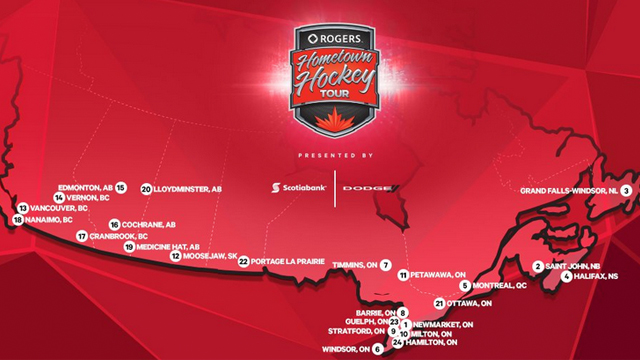 – Tour begins in Newmarket, ON, October 15-16, featuring a performance by Juno Award winning Walk Off The Earth –

TORONTO (September 7, 2016) More roads to drive, more rinks to skate, more stories to tell. Bringing to life the shared passion that unites hockey fans and families across the country, the Rogers Hometown Hockey Tour  – Canada’s ultimate hockey festival – is ready to hit the road, stopping in 24 new Canadian communities throughout the 2016-17 NHL season.

The cross-country extravaganza kicks off in Newmarket, ON, Saturday, Oct. 15 and Sunday, Oct. 16. Every stop of the tour features two jam-packed days of activities and celebrations that include music, NHL alumni, local heroes, and entertainment for families to enjoy.

This season marks the third year of Rogers’s ongoing commitment to growing the game of hockey through grassroots initiatives and events, connecting Canadian communities through memorable moments and shared experiences. Each community visited is highlighted on the Rogers Hometown Hockey broadcasts and hosted live onsite by Canadian icon Ron MacLean with co-host Tara Slone, headlined by an NHL game broadcast every Sunday on Sportsnet.

“How could Cole Harbour, Nova Scotia produce both Sidney Crosby and Nathan MacKinnon? Who or what led Manitoba to develop Jocelyne Larocque, Brigette Lacquette and Halli Krzyzaniak; three defencemen on our National Women’s Team from neighbouring small towns? On Rogers Hometown Hockey we answer these questions with stories that put actual faces on the heart and soul of our game – the roots of success each and every Sunday,” said MacLean.

“Over the past two seasons, communities across the country have welcomed us with open arms and it has been nothing short of a privilege to be able to share their stories with the rest of Canada,” said Slone. “To do this alongside Ron MacLean, hockey’s greatest raconteur, has been the greatest thrill of my career. I know that both Ron and I are beyond excited for each and every tour stop as we embark on our third season. In particular, I’m eager to get back to my hometown of Halifax, Nova Scotia!”

Hometown of Edmonton Oilers star Connor McDavid, the two-day celebration in Newmarket, ON will feature a live performance by Juno Award-winning Platinum selling recording artist Walk Off The Earth. The weekend culminates with the first Rogers Hometown Hockey broadcast of the season, featuring McDavid and the Oilers hosting Jack Eichel and the Buffalo Sabres in Edmonton at 6:30 p.m. ET on Sportsnet.

Live on location from the Sportsnet Mobile Studio, MacLean and Slone host the pre-game, intermission and post-game show on Sportsnet. Each week features visits from local celebrities, alumni, special guests while sharing compelling hometown stories with viewers across Canada.

Over the last two NHL seasons, the Rogers Hometown Hockey Tour has visited 49 communities across Canada, traveling 56,000 km (more than six times the length of the Canada / US border), while welcoming 400,000 visitors to the festival.  Details for each 2016-17 tour location – including special guests, activities, and entertainment – will be announced at a later date. For more details, please visit www.hometownhockey.com.