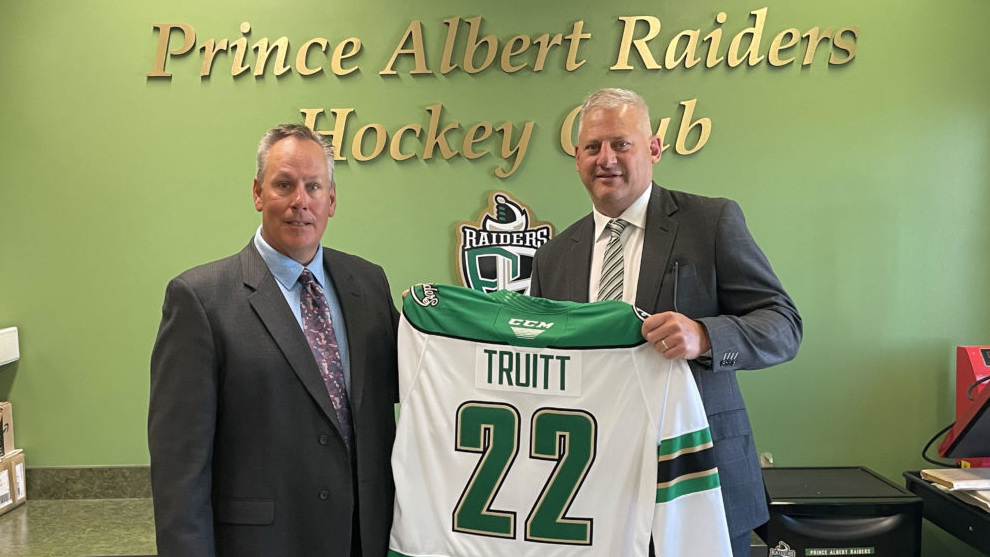 Just eight days after Marc Habscheid announced his resignation, the Prince Albert Raiders announced the signing of a new head coach, and the decision came internally.

After serving four years as an assistant coach with the team, Jeff Truitt has accepted the role as new head coach of the Raiders, becoming the 15th head coach in franchise history. The team announced the news on Friday morning.

Truitt joined the Raiders as an assistant coach in the 2018-19 WHL championship season.

“It was really a no-brainer,” Raiders general manager Curtis Hunt said. “Just when you look at the quality person Jeff is, the work ethic, the integrity, the passion, I think we have a great coach. He’s someone who can bring our players and our staff along and provide great leadership. The new chapter of the Prince Albert Raiders started today, and we’re all pretty excited.”

“Prince Albert is a great franchise, and we’ve had a long list of great coaches that have made their way through here,” Truitt said. “To be selected as the new head coach is certainly a feather in my cap, and I look forward to continuing the tradition of the team we’ve been since I joined the team (in 2018).”

In 2012, Truitt returned to the WHL, where he filled the role as associate coach with the Red Deer Rebels. He stayed in Red Deer for five and a half seasons.

Truitt’s tenure with the Rebels came to an end prior to the 2018-19 season, when the Raiders announced the veteran coach would be coming to Prince Albert to reunite with Habscheid. Fast forward four years, and Truitt has been presented the same opportunity as he was in Kelowna: filling Habscheid’s shoes as head coach.

“I’ve had some pretty good teachers, with Marc (Habscheid) being one,” Truitt added. “It’s cool, with the same schedule that this happened in Kelowna and now Prince Albert. With Marc in Kelowna, we won a Memorial Cup, and here in PA, we won the league championship and went to the Memorial Cup again. It’s pretty cool that way to see the parallel between the two. I just can’t say enough about the teachings that Marc gave all of us.”