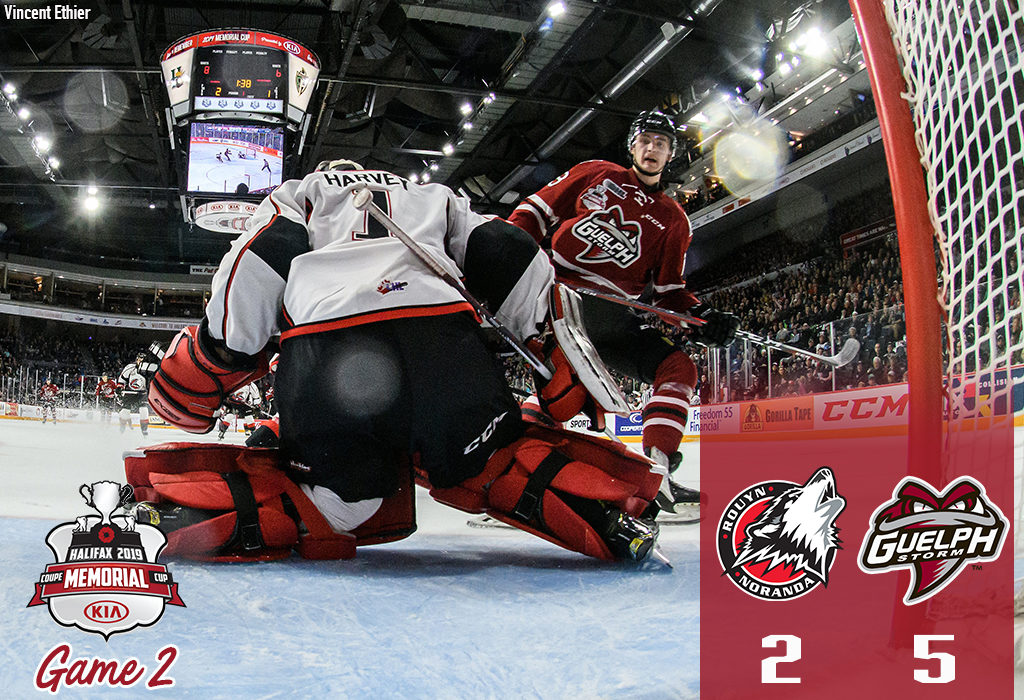 St. Louis Blues prospect Alexey Toropchenko stayed hot, scoring three times in a first period span of 8:23 to lift the Guelph Storm to a 5-2 win over the Rouyn-Noranda Huskies.

It’s a different look for the Storm, who lost the first game of three consecutive OHL playoff series before swirling back to ultimately hoist the J. Ross Robertson Cup as OHL champions.

Guelph did surrender the first goal on Saturday as Rouyn-Noranda’s Vincent Marleau snapped a shot past Anthony Popovich 2:17 into action.

“First period we kind of weathered the storm,” said Storm defender Sean Durzi, who picked up three assists in the win. “All playoffs and throughout the whole postseason I thought we did a good job of responding to adversity and we did so again tonight.

“It’s not the playoffs anymore, you can’t drop three and come back. I think we did a good job tonight of responding and starting on time.”

Toropchenko stepped up with the Memorial Cup’s first hat-trick in one period since Halifax’s Nathan MacKinnon in 2013, kicking off the trio shorthanded thanks to some tenacious forechecking from linemate Cedric Ralph. The diminutive winger rubbed out his man, inspiring a loose puck for Toropchenko who turned and ripped a shot past Samuel Harvey.

Toropchenko struck again 2:07 later as defenceman Jack Hanley found the big Russian hanging out in the goalmouth for an easy tap-in.

Durzi picked up his first of three assists with 1:38 to go in the opening frame, sending Toropchenko  in alone to beat Harvey with a deke to the backhand and give the Storm a 3-1 lead through 20 minutes.

“Cedric and Pavel or Dom, they are good guys and they’re always working hard and they help me a lot in the corners,” said Toropchenko of recent linemates Ralph, Pavel Gogolev and centreman Dom Commisso. “We kind of play the same way, fast, good in the battles and good chemistry with each other.”

Chicago Blackhawks prospect MacKenzie Entwistle converted off the rush 3:20 into the second to put the Storm ahead 4-1. Guelph’s quick transition game worked wonders as Durzi turned things around, finding Isaac Ratcliffe breaking into the offensive zone where he connected with Entwistle charing down the middle.

The Huskies showed a little life just beyond the midway point of regulation as Boston Bruins third round pick Jakub Lauko cut the deficit to two. The Czech winger beat a Storm opponent to the outside before tucking a puck past Popovich on the forehand.

After Popovich stalled the Rouyn-Noranda momentum with a group of highlight reel saves, OHL Playoff MVP Nick Suzuki reinstated the three-goal lead inside the final minute of the second. The Montreal Canadiens prospect connected with former Owen Sound Attack teammate Durzi, finishing off a two-on-one to put the Storm in full control.

Guelph locked things down in the third to close out the win before a crowd of 9,509, outshooting Rouyn-Noranda 29-24.

It was a good win,” said Storm head coach George Burnett who made his return to the Memorial Cup after last coaching in 2008. “I wasn’t real excited about the way we started the hockey game, I thought we were a little nervous and turned the puck over way too much throughout the night. We had some timely goals, had a big performance from Toropchenko who really elevated his game and gave us a big lift. Every time it looked like we were in a bit of trouble we found a way to get ourselves a goal and keep that three-goal lead.”

The Huskies will take a breather on Sunday, looking to rebound Monday night against the WHL champion Prince Albert Raiders (0-1).

The Storm return to action on Sunday, once again playing as the home team but this time against the tournament host Halifax Mooseheads (1-0) who come off a 4-1 win over Prince Albert on Friday night. Catch Sunday’s action on Sportsnet, TVA Sports, NHL Network and streaming live online at CHLLIVE.ca when the puck drops at 7:00pm ET/4:00pm PT.