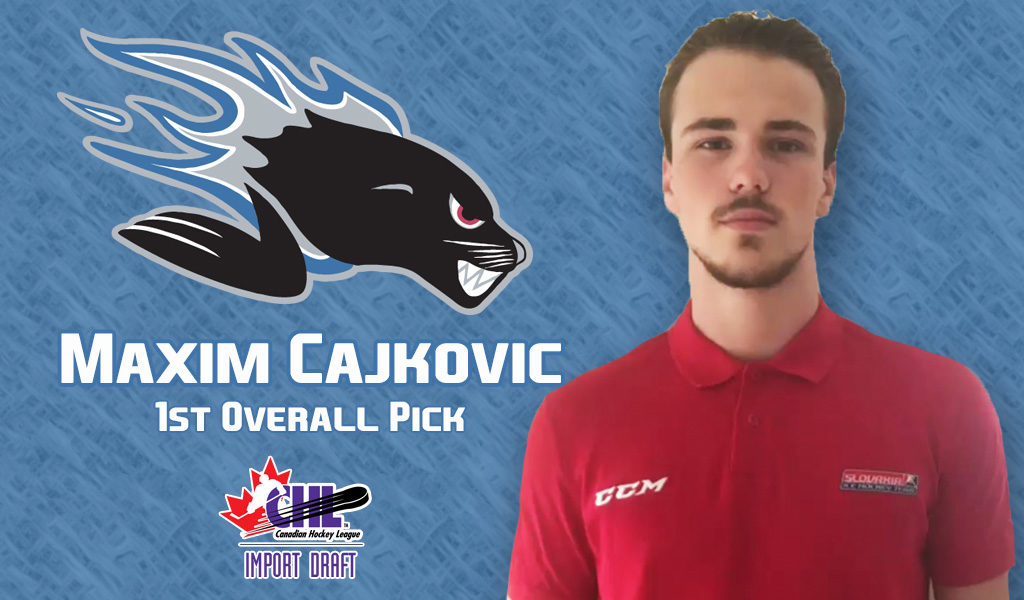 There will be an influx of world class talent across the Canadian Hockey League in September.

With 77 selections made in Thursday’s CHL Import Draft, 52 member teams from across the Quebec Major Junior Hockey League, Western Hockey League, and Ontario Hockey League took steps towards bolstering their lineups in preparation for next season’s puck drop.

Headlining the 2018 class is forward Maxim Cajkovic, a 17-year-old from Slovakia, chosen first overall by the Saint John Sea Dogs.

The 2019 NHL Draft prospect is already excited to showcase his abilities to CHL fans in the Port City.

Cajkovic played last season with the Malmo Redhawks which included 21 points in 28 games against under-20 players in the SuperElit league.  He also represented Slovakia at the IIHF World Under-18 Championship where he led the tournament with seven assists in five games while also producing four goals for 11 points overall against older competition.

“I would describe myself as a technically skilled sniper,” he says, also noting his ability as a playmaker. “I can also make good passes that find my teammates in open areas for them to score.”

Exceptional vision and soft hands, was Slovakia’s best player throughout the U18 World Championship. Dangerous whenever he is on the ice with high end speed, skills and playmaking ability#ISSRankings — ISS Hockey (@ISShockey) May 6, 2018

Although he’s never been to Saint John, Cajkovic is well aware of the team’s rich history in the CHL.

“I know Saint John is playing in the CHL since 2005 and won a Memorial Cup and three times a champion in the QMJHL,” he says, having spoken with the club Thursday after his selection. “They told me that they are really proud to have me with the team and are looking forward to seeing me in Toronto next week.”

Welcome to Saint John @CajkovicMax! 🇸🇰 Max was taken 1st overall in the @CHLHockey Import Draft. He was second in scoring at the World U18 tournament with 11 points in 5 games. He will be a great fit in the Port City. @SJSeaDogs — Trevor Georgie (@georgietrev) June 28, 2018

His next trip to Canada will be just his second visit after playing in Quebec’s famous Peewee international tournament where he picked up two points in three games.

“I don’t remember that much but we lost in the third game with the Swiss team,” he recalls. “The best memory is when I scored a goal at the Colisee in front of 10,000 people which in that time was amazing for me.”

The Sea Dogs have had success with dynamic Slovak scorers in the past, like Tomas Jurco, who played three seasons from 2009-12 helping capture two of the club’s three President Cup titles and a Memorial Cup victory in 2011 before being selected in the second round by the Detroit Red Wings.

“Tomas is a great player,” he said. “Great skills and vision, definitely he is a player I look up to.

“Alexander Ovechkin is my favourite player but I really liked Nathan MacKinnon this season and David Pastrnak,” he added. “These three players are the players I’m trying to model my game after.”

Four players chosen in the Import Draft were recently selected in the first round of the NHL Draft after further developing their skills in the CHL led by second overall pick Andrei Svechnikov of the Barrie Colts, last year’s top Import Draft choice.

2nd overall: Andrei Svechnikov to the @NHLCanes@ASvechnikov14 is the reigning OHL Rookie of the Year. He averaged 1.64 points per game in 2017-18, placing first among rookies and fifth overall. #NHLDraft pic.twitter.com/LNsCslbWLu — NHL Public Relations (@PR_NHL) June 22, 2018

Cajkovic has his sights set on Vancouver and the 2019 NHL Draft and hopes the CHL will help pave the way.

“It’s the best junior league in the world,” he says. “I will compete with the best players in this category. I think it’s amazing and of course I want to improve my game in the league.”