Top performers from the 2019-20 CHL preseason 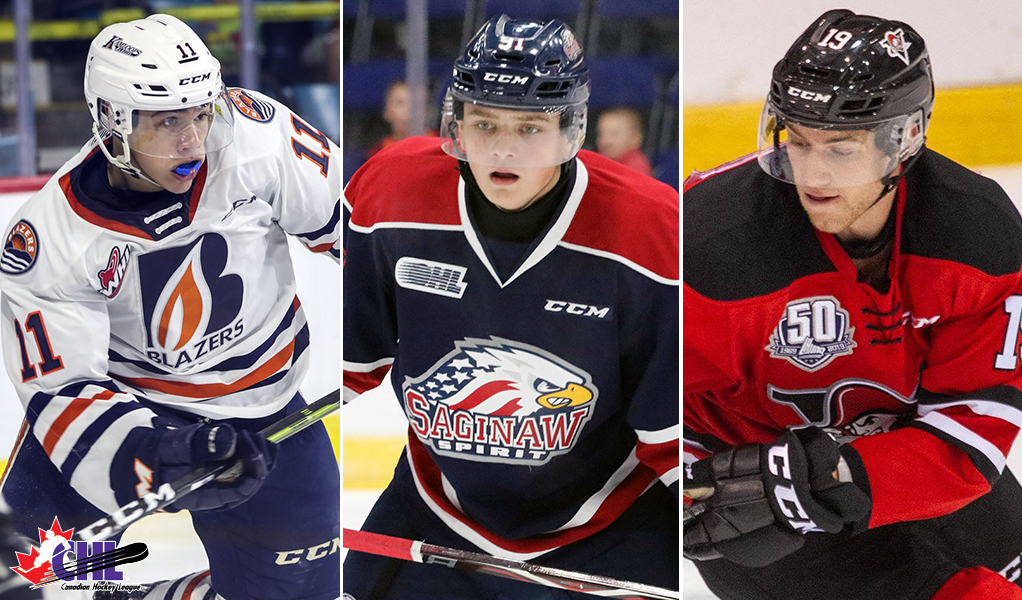 Three teams came away with perfect records while the next wave of budding talent impressed in the 2019-20 Canadian Hockey League preseason.

In the WHL, the Kamloops Blazers were a tidy 7-0-0-0, outscoring the opposition by a 41-13 margin. Leading the way for the Blazers was 16-year-old centre Logan Stankoven, the club’s fifth-overall pick from the 2019 WHL Bantam Draft who headlined all CHL scorers with 15 points, including a chart-topping eight goals. Meanwhile, impressing on the back end for the Blazers was third-year defenceman Sean Strange, who posted seven points in five games to lead all WHL rearguards.

Elsewhere in the WHL, the Edmonton Oil Kings went 5-0-0-0, putting 22 goals by the opposition while only allowing a combined five goals through the exhibition schedule. Leading the way for the Oil Kings was veteran forward Riley Sawchuk, who posted four goals and five assists for nine points across four appearances. Sawchuk joins Edmonton after spending the past three seasons with the Tri-City Americans.

Seattle Thunderbirds, Swift Current Broncos, and Saskatoon Blades all won at least four games and went without a loss in regulation. A top performance also came from the Vancouver Giants (4-2-0-0), who hope to have another successful season after advancing to Game 7 of the 2019 Ed Chynoweth Cup Final. A key cog for the Giants this season is sure to be 2020 NHL Draft prospect Justin Sourdif, whose six preseason points led draft eligibles from the WHL.

Wrapping up the WHL, the Everett Silvertips (4-1-1-0) look to have another budding netminder in Keegan Karki, who led the way with an outstanding .955 save percentage and a minuscule 1.20 goals-against average across three preseason appearances. The 19-year-old joined the Silvertips in May and hopes to make his WHL debut this fall.

In the OHL, the top record belonged to the Barrie Colts, who picked up eight points in six games after posting a 4-2-0-0 showing, while four other clubs were even with a .750 winning percentage, counting the Flint Firebirds, Owen Sound Attack, Mississauga Steelheads, and Windsor Spitfires.

Take a look at those new jerseys 👀 pic.twitter.com/6cwN5tXNMj

Between the pipes, Erie Otters (2-1-0-1) netminder Daniel Murphy impressed with a 2-0-0-0 showing alongside a .950 save percentage and 1.00 goals-against average. Meanwhile, rounding out the OHL was the latest heroics from Saginaw Spirit (3-2-0-0) centre and 2020 NHL Draft hopeful Cole Perfetti, who led all draft eligibles from the CHL with three goals and six assists for nine points in four games. Perfetti, who finished first among all OHL rookies last season with 74 points, projects as an early selection for next year’s NHL draft in Montreal.

While Perfetti led all NHL draft eligibles in points per game, his total production was matched by Chicoutimi Sagueneens (1-4-0-2) centre Hendrix Lapierre, a fellow 2020 NHL Draft prospect who put up five goals and four assists in five games. The first-overall pick from the 2018 QMJHL Entry Draft, Lapierre finished just shy of a point-per-game output last season in notching 13 goals and 32 assists across 48 games. That performance earned him a spot on the QMJHL All-Rookie Team, an honour that this season could go to Gatineau Olympiques (4-4-0-0) blue-liner David Aebischer, who registered seven points in four preseason showings to lead all QMJHL freshmen.

Elsewhere, the QMJHL’s top team performance came from the Baie-Comeau Drakkar, who were perfect across six games while outscoring the opposition by an 11-goal margin. Also impressing was the Acadie-Bathurst Titan, who went 5-1-0-0, helped by a dominant showing from veteran goaltender Tristan Berube, who led all league netminders with a .946 save rate and 1.48 goals-against average across three exhibition games.

Rounding out the QMJHL, the Drummondville Voltigeurs came away with a 4-3-0-0 record, receiving strong showings from 17-year-old right-wing Dawson Mercer, who led the QMJHL with 11 points, counting three goals and eight assists, while teammate Jeremy Lapointe topped the charts among league rookies in registering five goals and five assists for 10 points across six contests.

With the exhibition schedule now in the rear view mirror, the regular season is set to begin Thursday with a pair of games, featuring the Blainville-Boisbriand Armada taking on the 2019 Memorial Cup champion Rouyn-Noranda Huskies, while the Sudbury Wolves face off with the Niagara IceDogs.

Top preseason performers at a glance: