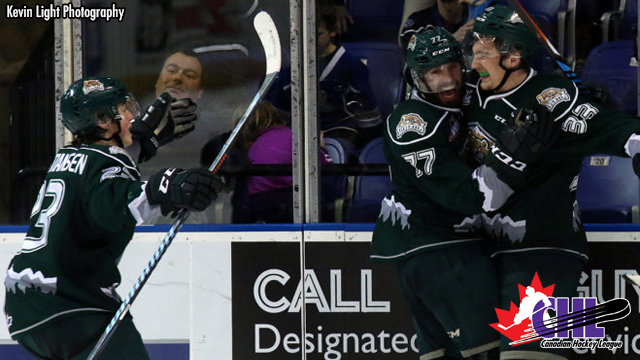 It’s a quick turnaround across the Canadian Hockey League as the second round gets underway on Wednesday less than 24 hours after the end of the first.

The Broncos and Hurricanes join the Acadie-Bathurst Titan in ending lengthy playoff droughts. Swift Current and Acadie-Bathurst advance to the second round for the first time since 2008 while the Lethbridge Hurricanes defeated the Red Deer Rebels in Game 7 to earn their first series victory since 2009.

In Cape Breton, Jordan Ty Fournier scored 2:30 into overtime to give the Screaming Eagles a 5-4 Game 7 win over the Gatineau Olympiques. Fournier and Massimo Carozza each scored twice as Cape Breton avoided collapse after originally taking a 3-0 lead in the series.

Overtime heroics also came alive in Kingston as draft eligible Finnish winger Linus Nyman took a centering feed from fellow draft prospect Jason Robertson 8:48 into overtime to give the Kingston Frontenacs a 3-2 win over the visiting Hamilton Bulldogs. Kingston overcame a 2-0 deficit in Game 7 as well as in the series itself, advancing to the second round for a second straight year after going 17 straight without winning a playoff round.

First round upsets included the 14th seed Val-d’Or Foreurs disposing of the third place Shawinigan Cataractes in six games. The surprising series win comes a year after the Foreurs themselves were bounced in a first round upset at the hands of the Blainville-Boisbriand Armada. The road won’t get any easier for Val-d’Or as they will take on the first place Saint John Sea Dogs in the second round.

The defending QMJHL Champion Rouyn-Noranda Huskies are off to the second round after overcoming a feisty Halifax Mooseheads squad in six games. The Huskies feature several pieces of their championship team from last year including Colorado Avalanche prospect Jean-Christophe Beaudin, veteran forwards Gabriel Fontaine, Alexandre Fortin and Mathieu Boucher as well as star defencemen Jeremy Lauzon and Philippe Myers.

A storybook season in Prince George came to an abrupt end against Portland as the Winterhawks outgunned the Cougars in a high-scoring series. Each game featured at least six goals between the two clubs as Portland’s Keegan Iverson and Skyler McKenzie led the way with three goals each while Cody Glass, Ryan Hughes and Edmonton Oilers prospect Caleb Jones also contributed.

The Winterhawks have now reached the second round in seven of the last eight years. They’ll duel a familiar playoff foe in the Kelowna Rockets who they have faced in 2012, 2014 and 2015.

The 2018 Mastercard Memorial Cup host Regina Pats are all set for a second round date with Tyler Steenbergen and the Swift Current Broncos.

A U.S. Division clash between the first place Everett Silvertips and second place Seattle Thunderbirds is also a series to keep an eye on. Seattle took six of the 10 meetings between the two clubs but six of those encounters were decided by one goal.

The Silvertips made CHL history to punch their ticket to the second round, defeating the Victoria Royals 3-2 on a fifth-overtime game winner by Cal Babych to take the series in six games. The 151:36 marathon is the longest game in CHL history, surpassing the prior mark of 146:31 between the Victoriaville Tigres and Hull Olympiques on March 19, 1999.

The Thunderbirds have been without star centreman Mathew Barzal in the playoffs so far as the New York Islanders prospect came down with a case of the mumps. The T-Birds are hopeful for a return in the near future but hasn’t announced any updates on his status.

Last but not least, the Erie Otters and London Knights are set to clash in the OHL Playoffs for a third straight year. The Otters come in after becoming the first team in CHL history to record four straight 50-win seasons while the Knights recently defended their Mastercard Memorial Cup title with a seven game series win over the Windsor Spitfires.

Down 3-1, London fought back to win three straight and defeat Windsor on Olli Juolevi’s third period game winner on Tuesday. The Knights were swept by the Otters in 2015 before returning the favour last year.

With Dylan Strome, Alex DeBrincat, Darren Raddysh and Kyle Pettit all likely embarking on their final playoff push with Erie, the Otters look to capture an elusive OHL Championship before their window closes with the graduation of several key pieces.

There’s all those series and a number of other exciting matchups to keep tabs on. Here’s a look at the playoff landscape across the Canadian Hockey League.

Play #CHLPredictor and choose playoff winners from across the Canadian Hockey League! Register through the new #CHLFanbase module, earn points for correct picks, and have the chance to win great prizes including a trip to the Mastercard Memorial Cup.