The Week That Was – Players headed to World Junior camp 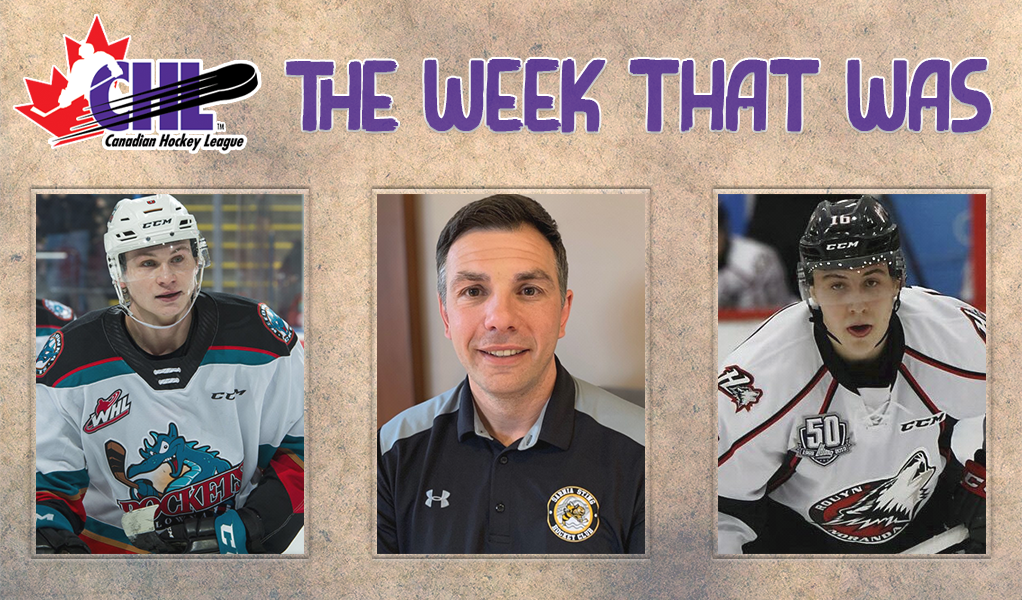 The week begins on a high note as 42 players from across the Canadian Hockey League are headed to Red Deer to take part in Hockey Canada’s selection camp in hopes of earning a roster spot at the upcoming World Juniors.

With camp set for November 16 through December 13, off-ice assessments began Monday with the first Red vs. White scrimmage set for Saturday. A six-game set that sees potential roster players face off against a team of U SPORTS All-Stars then begins November 28.

Canada’s squad at the 2021 World Juniors is expected to include a number of players who helped the Great White North to a gold-medal finish a year ago, including Lethbridge Hurricanes captain Dylan Cozens (Buffalo Sabres), Sudbury Wolves centre Quinton Byfield (Los Angeles Kings), and Chicoutimi Sagueneens forward Dawson Mercer (New Jersey Devils), among others.

Also hoping to earn a spot on the national stage this year is Kelowna Rockets veteran defenceman Kaedan Korczak, a 2019 second-round selection of the Vegas Golden Knights.

“I haven’t played a game since March so I’m a little bit nervous but obviously excited,” the Yorkton, Sask., native told Greg Harder of the Regina Leader-Post. “That’s why everyone trains and why everyone practices is to play games at a high level. I’m definitely excited to get out there and get going … It’s something I’ve dreamed of as a kid. I would always watch it every year at Christmas, like a routine. To have a chance to play in it would definitely be something special.”

The national spotlight is familiar territory for Korczak who has previously participated in Hockey Canada’s Program of Excellence as part of the 2017 World Under-17 Hockey Challenge followed by a gold-medal win at the 2018 Hlinka Gretzky Cup. Korczak is hoping to use that experience to his benefit as he aims to earn a spot this year.

“Hockey Canada knew we weren’t playing many games so they extended the camp by a couple weeks so we could get comfortable and get back to playing how we normally do,” Korczak added. “Once everyone gets there and gets their confidence back it’ll be a great camp.”

Played from Edmonton in a controlled environment, the 2021 World Juniors will see Canada go for gold on home ice and its first back-to-back first-place finish since 2009 that would mark its 19th gold-medal win in tournament history. Tournament play opens December 25 with Canada’s first contest coming the following day against Germany.

A hat-trick is always special but the story so far this season has been the frequency of the four-goal game.

For the third time this year, the QMJHL saw a four-goal game Saturday as Colorado Avalanche prospect and 2019 Memorial Cup champion Alex Beaucage of the Rouyn-Noranda Huskies lit the lamp four times versus Val-d’Or. Making the achievement even more impressive however was that all four goals came unanswered in span of just 9:25 and culminated with the overtime winner in a 5-4 victory that ultimately helped Beaucage later earn recognition as the QMJHL Player of the Week.

Sitting seventh in QMJHL scoring with 19 points counting 13 goals and six assists through 10 appearances, Beaucage joins Philadelphia Flyers prospect Elliot Desnoyers of the Halifax Mooseheads as players to have put up four-goal showings after the latter did so twice previously this season versus Cape Breton and Charlottetown.

The Sarnia Sting are set to ‘Pay It Forward’.

As the team prepares for the coming OHL campaign, it is doing so alongside a new community engagement endeavour that encourages both team management and its players to give back locally by taking a pledge, getting involved in a cause near and dear to them, or through a simple act of kindness.

The first to Pay It Forward for the Sting is general manager Dylan Seca with his pledge to the “Get Uncomfortable Campaign” by the Black Girl Hockey Club, a movement that aims to make hockey more welcoming to everyone by disrupting the status quo on and off the ice.

“We recently had a call with Rico Phillips, the OHL Director of Cultural Diversity and Inclusion, and he really got me thinking about inclusiveness in our sport and where things are at currently,” Seca detailed. “I’ve seen some social media presence of Black Girl Hockey Club and it’s something I found really interesting and wanted to get behind.

“Listening to what has been happening with the social justice around our sport for the last number of months, I think it’s just a great campaign to become a part of.”

With a mission to prevent exclusion in hockey based on race, the Black Girl Hockey Club aims to “provide education, scholarship opportunities, and community spaces that will give Black women access to hockey”.

To date, Seca is among nearly 4,000 participants to have taken the pledge. For more information, visit BlackGirlHockeyClub.org.