The Week That Was – Contract signings and community kindness 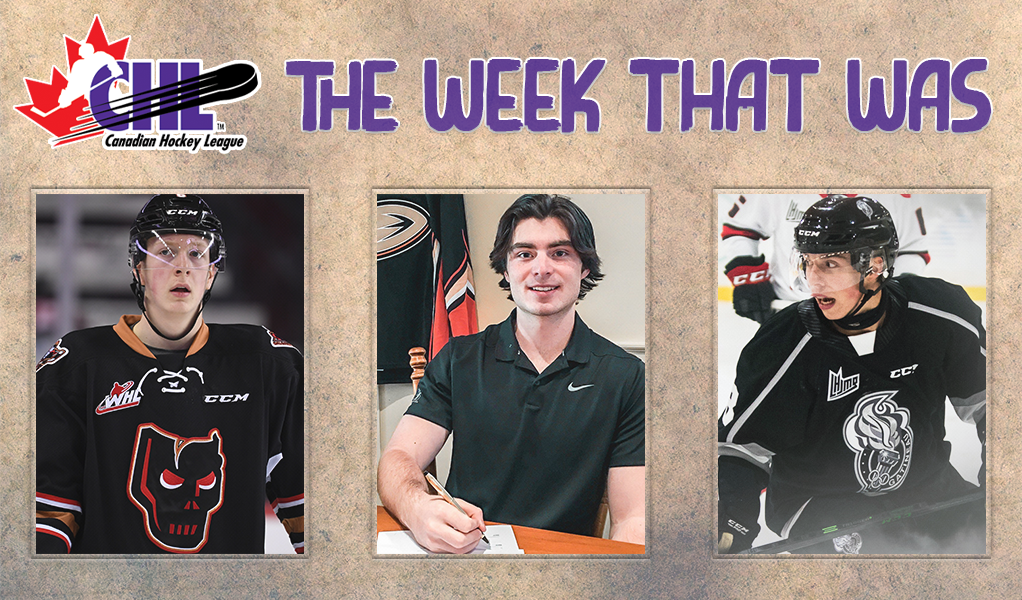 The past week saw four names added to the list beginning with a pair of Anaheim Ducks first-round selections in Erie Otters blue-liner Jamie Drysdale who heard his name called sixth overall and who will be joined in Southern California by Sarnia Sting right-wing Jacob Perreault who was chosen at No. 27.

The selections unite a pair of OHL rivals who have not only faced off against each other as part of the Otters and Sting but also dating back to their days in minor hockey.

“(Perreault) is an awesome guy, first and foremost, and then you put that together with how he is on the ice, known for his goal scoring and just how he can put the puck in the net,” Drysdale told the OHL. “Hearing his name called that night was definitely really cool for me. We’ve been texting and talking about it. We’re both really excited to have the opportunity.”

"My goal will always be making the NHL as fast as possible."

Rounding out the week, the Nashville Predators came to terms with London Knights right-wing Luke Evangelista, picked 42nd overall and one of two Knights selected in the 2020 NHL Draft, while the Winnipeg Jets announced Monday the club’s signing of Saginaw Spirit left-wing and 10th overall selection Cole Perfetti.

Tristan Luneau is wasting little time in making his presence known in Gatineau.

The first-year defenceman and top pick from the 2020 QMJHL Entry Draft is off to a strong start with the Olympiques, already with two points through four appearances in which Gatineau has come away with the victory on three occasions.

Away from the rink, Luneau is also excelling in the classroom as the 16-year-old achieved a 97% academic average in October, earning recognition as Gatineau’s representative among the QMJHL’s Scholastic Players of the Month.

From rookies to veterans, from High School to University, here are the #QMJHL's top student-athletes for the month of October!

“Tristan is a hard worker on the ice but even more so (in) school,” Olympiques education advisor Yvan Nolet said of the 11th grade student. “He comes prepared to study and he is here for the right reasons. As soon as he arrives, he is set to work. He is a true role model for his teammates.”

A pillar of any CHL organization is making a profound impact in its community, with a number of teams and players recently launching new initiatives.

In honour of his uncle, @StingHockey forward Brayden Guy (@brayden_guy9) has launched his @MovemberCA campaign to raise awareness for men's mental health and suicide prevention.

In Sarnia, 2001-born forward Brayden Guy will pound the pavement throughout November, committed to running 60 kilometres in an effort to raise awareness for men’s mental health and suicide prevention. Guy pledged to donate $5 for each kilometre he runs.

The movement strikes close to home for Guy whose uncle committed suicide in 2019.

“We got pretty close over the years. It was devastating for me and my family,” Guy told the OHL. “Grieving never goes away, but once I got over that initial stage I wanted to use the social media platforms given to us as athletes to raise awareness because I know it impacts so many people … I decided to run 60 kilometres for 60 men who lose their life to suicide every hour.”

The @ErieOtters have a sharp dressed man 👌🎀

Assistant coach Wes Wolfe (@weswolfe91) has raised over $7,000 for the @AmericanCancer Society through his #RealMenWearPink campaign.

In Erie, the Otters’ Real Men Wear Pink Campaign in association with the American Cancer Society and spearheaded by assistant coach Wes Wolfe came to a close with donation levels topping more than $7,000 and far exceeding the initial $5,000 goal.

The campaign saw Wolfe incorporate pink clothing into his outfit each day in an effort to raise cancer awareness and generate funds in support of breast cancer initiatives.

“I am so proud of the efforts by everyone involved to help achieve and surpass the goal,” Wolfe said. “I am truly grateful for all of the support, passion, and donations.”

Please join us in honouring the veterans of Camp Hill for all they have done for us. Thank you for your service! @CFBHalifax @HealthNS #CanadaRemembers pic.twitter.com/7owr2BVM9N

Meanwhile, in the QMJHL, there may be no player donating more time to his community than Halifax Mooseheads veteran forward Liam Peyton.

Following in the footsteps of former Charlottetown Islanders teammate Matthew Welsh in becoming involved with Hockey Gives Blood, Peyton shares in Welsh’s eager desire to give back to the community.

“I was fortunate enough my whole life to be healthy and to be able to do what I love but there are other people who haven’t been as fortunate,” Peyton told the QMJHL. “It’s really important for me to give something back to those people.”

Another effort near and dear to Peyton’s heart is the Mooseheads’ Military Member of the Game in tribute of those in the Canadian Forces. Peyton’s father is a brigadier-general currently serving in Iraq.

“It was a good fit for me because I’ve been around that life since I was born,” Peyton added. “I know exactly what the military means to those families and how important it is for our country. I feel pretty fortunate that I was given the opportunity to salute those military members, give them (Mooseheads) jerseys, and show our organization’s appreciation, as well as my own, for their work.”

Continuing out west, the Kamloops Blazers are keeping their longstanding tradition of a teddy bear toss despite the challenges that come during a pandemic. While fans won’t be able to throw the stuffed animals on to the ice surface as in a normal year, the Blazers are encouraging fans to donate online as part of this season’s collection.

All donations will be used to purchase teddy bears and other toys of comfort that will be contributed to the Pediatric Department at Royal Inland Hospital in Kamloops. The effort hopes to continue an annual traditional that has been in place since 1993 where hundreds of stuffed animals are donated to local sick children. The organization has set a goal of $5,000 to refill its stock of stuffed animals.

Hearing his name called 73rd overall by the Nashville Predators, the selection by the Music City club made Prokop a member of his boyhood team, one the Edmonton native came to love as he vividly took in former Predators captain and Kelowna Rockets graduate Shea Weber.

“It was an awesome moment and something out of a storybook,” Prokop recollected. “I idolized Weber the more I watched him and he is a guy I always tried to model my game after.”

"That was the icing on the cake for me, going to the team I grew up watching so much.”@lukeprokop_6 had an extra special draft day after being selected in the third round by his favourite NHL team, the @PredsNHL ➡️ https://t.co/JbQb86W63z pic.twitter.com/FpIb5cKJqP

Beyond joining his favourite club, Prokop is also excited about the opportunity to join an NHL organization noted for its deft development of high-quality defencemen, including a number of CHL graduates like Weber, Ryan Ellis (Windsor Spitfires), and Seth Jones (Portland Winterhawks).

“You see the guys that they have groomed and brought up,” Prokop added. “They are doing a lot of things right for that to happen and I’m looking forward to hopefully being a part of that long list one day.”

A participant in the 2020 Kubota CHL/NHL Top Prospects Game, Prokop ultimately became one of 21 CHL blue-liners chosen in the 2020 NHL Draft.