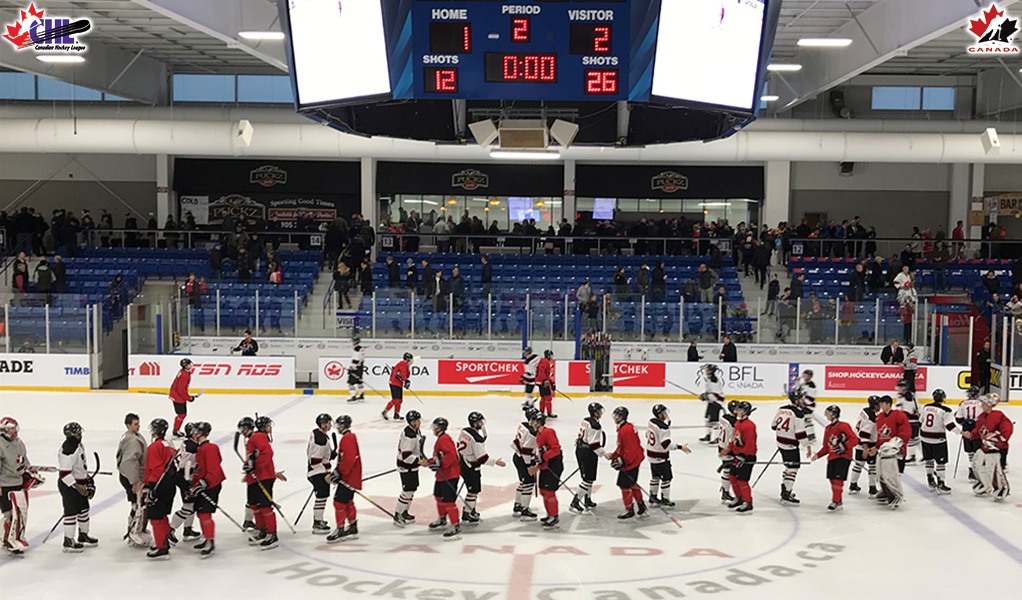 Canada’s National Junior Team hopefuls came away with a 1-1 showing in a pair of Selection Camp contests held against the U SPORTS All-Stars in preparation of the 2020 IIHF World Junior Hockey Championship.

Between the pipes, the four netminders competing for a spot on the national stage were split between the two squads with all four getting into action Wednesday. In Game 1, suiting up for Canada included Joel Hofer (Portland Winterhawks) who stopped 13 of 15, while Nico Daws (Guelph Storm) turned aside 11 of 12 shots. Across the rink, Olivier Rodrigue (Moncton Wildcats) stopped nine of 11, while Hunter Jones (Peterborough Petes) turned aside eight of 10.

Back in action on Thursday, the second contest saw U SPORTS triumph in a tightly battled 2-1 final in which all three markers came in the opening frame.

A two-goal lead on goals from #CHL grads Mathew Santos (North Bay Battalion) and Trevor Cox (Vancouver Giants) got U SPORTS on the board early before Team Canada replied but ultimately fell short in a comeback bid. The game once again saw all four netminders suit up, doing so for the opposite team as the previous contest. For Team Canada, Jones turned aside 10 of 12 shots while Rodrigue stopped all 10 that came his way. Meanwhile, U SPORTS saw solid support from Hofer who stopped all seven shots he faced, while Daws denied four of five shooters.

In what promises to be one of Canada’s most watched battles in the lead up to the final roster announcement, the four netminders wrapped up the two-game set with relatively even save rates with Hofer leading the way at .909 followed by Rodrigue at .905, Daws at .882, and Jones at .818.

In all, the two-game set served as the latest evaluation for the Hockey Canada brass that continues to work toward its final roster that will begin play Dec. 26 in the Czech Republic when Team Canada faces off with the United States.

On Thursday, it was also learned that Arizona Coyotes forward and Soo Greyhounds graduate Barrett Hayton will be on loan to the team, joining Grand Rapids Griffins forward Joe Veleno (Drummondville Voltigeurs) among the returnees from last year’s annual classic.