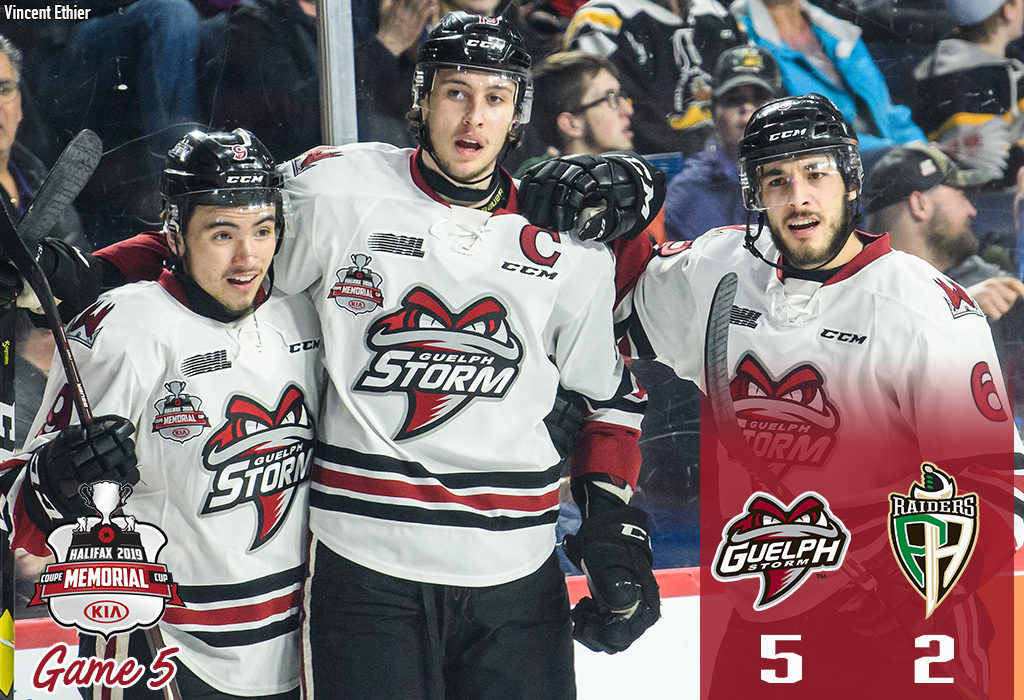 Childhood friends Nick Suzuki and Isaac Ratcliffe came together to power the Guelph Storm offensively in a 5-2 win over the Prince Albert Raiders at the Memorial Cup Presented by Kia on Tuesday.

The Storm improve to 2-1, sending the WHL champion Raiders home with an 0-3 record as Suzuki scored twice and added an assist while Ratcliffe scored and chipped in with two helpers.

No mistake made on the short break in transition by the @CanadiensMTL prospect who gives @OHLHockey’s @Storm_City a 4-2 lead in Game 5 of the #MemorialCup ? pic.twitter.com/zqUlEE1Usx

Guelph scored five goals on 25 shots as blueliner Sean Durzi picked up a pair of assists to lead the tournament in scoring with seven points (2-5–7) in three games while Fedor Gordeev and Liam Hawel also lit the lamp.

“We do well in key situations and that’ll have to continue into the tournament,” said Suzuki whose Storm club is five-for-five in games where they can eliminate an opponent. “Every game is do-or-die now and we’re ready for the task in front of us.”

“We’re a team that likes to play off the transition and that’s what we did tonight,” added Ratcliffe. “We kept them outside the dots in our end and tried to get the puck to that spot in the offensive end. We did a great job at keeping pucks down low. Schnarr, Hawel and Toropchenko did a great job at playing in the corners and behind the net and that’s exactly how we want to play.

“It was a great effort from everyone tonight and we’re really happy with this win.”

The Storm scoring got started from an unlikely source as big 6-foot-7 defender Gordeev jumped into the rush, using his long reach to chip a Suzuki pass up over the shoulder of Ian Scott midway through the opening period.

Prince Albert came up with an answer on the power play less than two minutes later as franchise games played leader Sean Montgomery tipped-home a Noah Gregor release from the top of the circle.

The Storm climbed back out in front at 15:18 as Ratcliffe scored what could be the goal of the tournament, undressing a Prince Albert defender cutting through the middle before beating Scott through the legs on the backhand.

The Raiders answered back before the first expired as overage forward Dante Hannoun tipped a Brayden Pachal point shot past a screened Anthony Popovich with 44 seconds remaining.

A back-and-forth first period gave way to a Guelph-controlled second as the Storm took control with with two goals in the opening five minutes.

Isaac Ratcliffe scores a backhand beauty at the #MemorialCup!https://t.co/rOPta1QJBu

Dallas Stars prospect Liam Hawel ripped a wrister over the glove hand of Scott 1:21 into the fresh frame before Suzuki scored his first of two at 5:02. Guelph took advantage of a Prince Albert neutral zone turnover, transitioning quickly as Ratcliffe hit Suzuki charging down the middle for the finish.

The Storm led 4-2 after two before Suzuki finished the scoring 6:42 into the third, beating Scott from below the goal line with a perfectly executed bank shot with an assist from Ratcliffe.

Guelph outshot Prince Albert 25-21, winning 69 percent of the game’s faceoffs. The Storm are guaranteed a spot in Friday’s Semi-Final but could potentially book their ticket to Sunday’s Championship Final pending the outcome of a Wednesday night QMJHL showdown between the Halifax Mooseheads (2-0) and Rouyn-Noranda Huskies (1-1).

“We were gassed, you could just tell,” said Raiders head coach Marc Habscheid following his team’s final game together. “We played a fresh team and we didn’t have much in the tank, we couldn’t generate much.

The WHL champion Raiders were led in tournament scoring by San Jose Sharks prospect Noah Gregor who had five points (2-3–5) in three games. The Raiders won their first WHL Championship in 34 years and finished the campaign with a 54-10-2-2 record to earn the Scotty Munro Trophy as regular season champions.

“These guys are proud Raiders,” Habscheid concluded. “This season has helped the organization because it’s okay to be a Raider again. They did that for the organization and we’re forever greatful for that to them.”

Up next, the Halifax Mooseheads face the Rouyn-Noranda Huskies in a QMJHL President Cup Final rematch on Wednesday night to round out the preliminary round of the Memorial Cup Presented by Kia. The puck drops at 7:00pm ET/4:00pm PT on Sportsnet.