Suzdalev settling into life in Regina 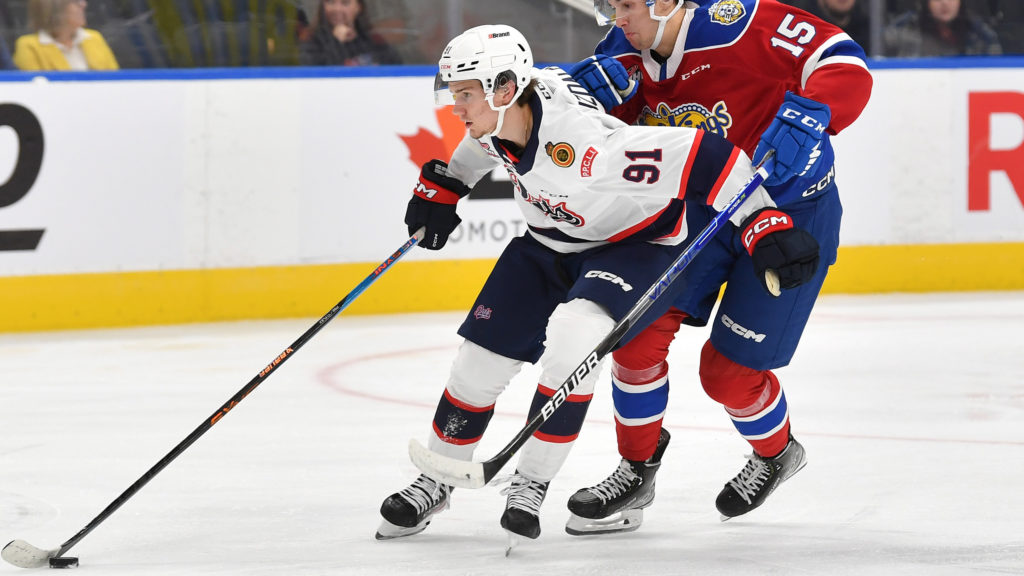 If you didn’t know about Alexander Suzdalev’s silky hands beforehand, you will now.

“I’m not sure how I got it,” Suzdalev said of his skill. “I think when I was younger, I was playing for fun and playing with mini sticks all through hockey and trying new things to be creative.

“I like to be creative on the ice. The ice is pretty small here so there’s more room for skill.”

While he admits his hands are his best skill — with the caveat of “I have some more things to improve and try to be a more complete player” added in — his first WHL goal highlighted his release more than anything.

Columbus prospect Stanislav Szozil fed Suzdalev below the right circle where he unleashed a one-timer for his first goal in a Pats jersey Sunday in a 7-3 defeat to Calgary. He would register his first multi-goal WHL game Wednesday in a 3-1 victory over Brandon.

Alexander Suzdalev buries his 1st career goal in @TheWHL on the power play off a great feed from Svozil!

In four games this year, the Swede, who was born in Russia but moved to Scandinavia when he was seven, has three goals and one assist. The Pats are 3-3-0 out the gates.

“It has been really good so far,” Suzdalev said of his time in Regina. “[The play] has been more physical than Sweden and it’s a different sized rink. It’s smaller and play is faster but it’s been fun.

“It’s nice to get my feet wet a little bit and now it’s about [going] forward every game.”

Of course, in Regina, the 18-year-old gets to play alongside Connor Bedard. However, it’s not his first experience with the 2023 NHL Draft’s top prospect; the pair played together ahead of the shortened 2020-21 WHL season in Sweden with HV71’s U18 and U20 teams.

“You already know how skilled he is but it’s the stuff he can do on the ice to score the puck,” Suzdalev said. “But what’s even better he is a better guy off the ice too. He’s a great guy to be around.”

That admiration between the two is mutual.

“He’s such a skilled player,” Bedard said. “It seems like he can find me all the time. I’m really looking forward to building that chemistry.”

It was Suzdalev’s standout 2021-22 campaign with the U20 squad that caught the eye of the Caps. After the Pats took him with the 95th overall pick in the 2021 CHL Import Draft, he would lead HV71 with 51 points, good for 10th in the Swedish junior league.

Suzdalev was selected 70th overall earlier this summer, and in a magical twist, by the team he grew up rooting for. Though not named after either, Suzdalev shares a mutual first name with his two idols; Ovechkin and Semin.

“I was at home watching the draft with my family and friends,” said Suzdalev, who signed his entry-level contract July 15. “Getting my named called out was really nice. My parents were proud and being drafted by the Washington Capitals, they’re such a great organization, and I was a big Caps fan when I was younger.

“I got some chills on my skin when they selected me.”