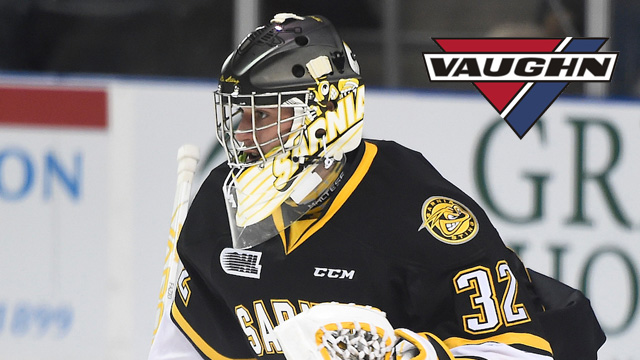 Toronto, ON – The Canadian Hockey League today announced that Justin Fazio of the Sarnia Sting is the Vaughn CHL Goaltender of the Week for the week ending November 12 after posting a 1-0-1-0 record including one shutout with a goals-against-average of 1.98 and save percentage of .926.

Fazio stopped 72 shots last week helping the Sting earn three of a possible four points against tough OHL Western Conference competition to maintain first place in the league’s overall standings with a 16-3-1-0 record.  On Friday night Fazio turned aside 33 shots despite a 4-3 overtime loss to the second place Sault Ste. Marie Greyhounds, then rebounded Sunday to earn his first shutout of the season with 39 saves as third star of a 7-0 win against the Owen Sound Attack.

A 20-year-old from Sarnia, Ont., Fazio is playing in his fifth career season with his hometown Sting after being chosen by the club in the fourth round of the 2013 OHL Priority Selection.  The overage netminder became the club’s all-time wins leader earlier this season and now has 67 in his tenure powered by a league-high 12 victories so far in 2017-18.  In 15 appearance this season he carries a goals-against-average of 2.64 and save percentage of .929.