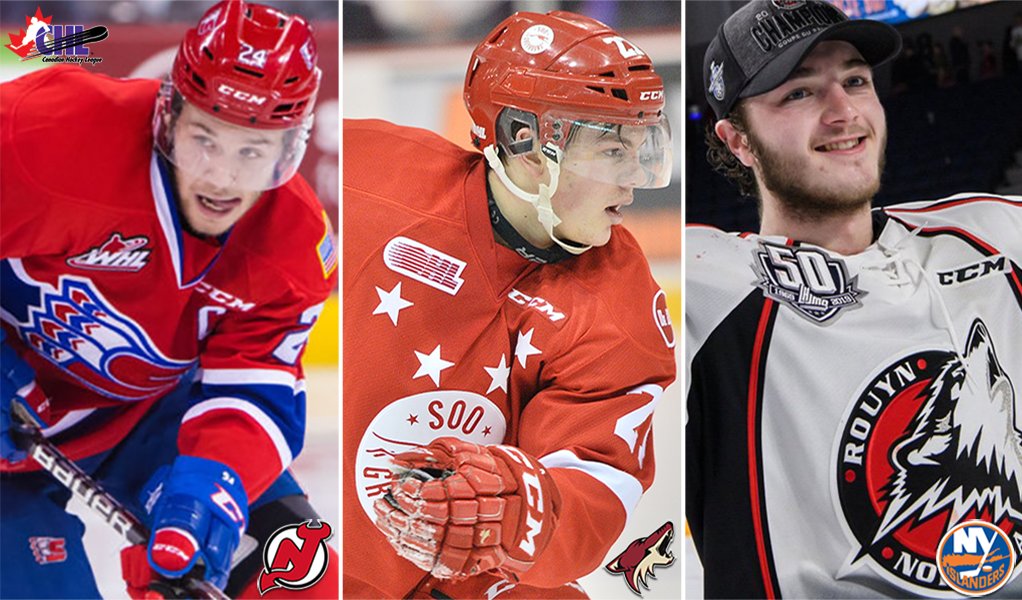 A trio of 19-year-old stars from the Canadian Hockey League have their sights set on the next level.

Ty Smith has returned to New Jersey for this year's Development Camp on a mission to further advance toward a roster spot.

Selected 17th overall in the 2018 NHL Draft, Smith aims to make an ascending Devils squad that finished last season with 72 points but with hopes of qualifying for the playoffs for the second time in the past three years.

“I’m definitely excited to go to camp in New Jersey and have an opportunity to play in the NHL,” Smith told the CHL. “Obviously it’s not an easy league to make and there is a lot of work I have to continue to do leading up that. I have to have my compete level raised to the highest possible at camp. I’m pretty excited but we’ll see how it goes.”

A top-notch defender with premium puck-moving abilities, Smith wrapped up last season with 69 points, finishing second in Chiefs scoring before claiming the Bill Hunter Trophy as the WHL’s top defenceman and later earning recognition as the CHL Defenceman of the Year.

“If I’m playing to the best of my abilities, I feel like I can play,” Smith said of earning a spot with the Devils. “It’s up to them and we’ll see what they think, but I feel confident in myself, and I feel that every year when you go to camp you wouldn’t be having the right mindset if it wasn’t to make the team as that is the purpose of camp.

“Having a year of experience there, seeing what everyone is like, and how they compete, how guys are competing for their jobs, lives, and families, knowing that and what it will be like will help me for this year’s camp.”

We mic’d up @BarrettHayton during the Red & White Game and it was a guaranteed good time. pic.twitter.com/WYv1NjH83a

In the OHL, the early expectation is that the Greyhounds will not see the return of their captain with Hayton likely to lock down a role with the Coyotes, the club that drafted him fifth overall in 2018.

Hayton competed in Arizona’s training camp a year ago, making the final roster but not getting into the lineup as he was sidelined with an injury. Still, the up-and-comer stayed with the big club to start the season, an opportunity that allowed him to observe and learn in the pro environment.

“Going into camp last year, it was my first time and my goal was the same then,” Hayton said. “I think having another year under my belt and a little experience at the start of the season definitely helps. Going through world juniors and playing at that level, you kind of get a taste of an in-between step with the speed, so I’m really looking forward to camp and competing for a spot.”

After returning to the Soo in early October, it was just three days later when Hayton, a natural leader, was granted the ‘C’. The Peterborough, Ont., native handled the role well, following up his draft year with a successful season as the reigning OHL Scholastic Player of the Year notched 26 goals and 40 assists in only 39 appearances, or 1.69 points per game, good for third-best in the entire OHL.

Hayton’s focused approach has led to his success and it’s one he plans to replicate at Arizona’s camp this fall.

“I just have to play my game. Obviously I was drafted to be the player I am. I don’t think it’s necessarily going into camp and trying to fit a role,” Hayton added. “I think you go in there and you play your game and go from there. You see where they have you fit into the lineup and you make the most of that. Going in, I’m just going to play the game that I’ve always played and that I’ve found success with.”

"I feel like I had a really good summer, I put on some weight, got stronger and I feel really confident. Now it's just about going in, having a good camp and making it a tough decision for them." @_ND53 https://t.co/uq3NY38Xuh

In the QMJHL, Dobson appears set for the next level after capturing back-to-back Memorial Cup championships with the Acadie-Bathurst Titan and the Huskies.

In particular, the budding blue-liner was a standout in last year’s Memorial Cup Presented by Kia, seeing over 75 minutes of ice time in the final two contests, including more than 36 minutes in the Championship Final as he earned a spot on the Memorial Cup All-Star Team.

Drafted 12th overall by the Islanders in 2018, Dobson joined Rouyn-Noranda in early January with the goal of winning another championship. Not only did he ultimately hoist the Memorial Cup again, he also claimed his second consecutive league title in the President’s Cup. Dobson was dominant during the run, recording eight goals and 21 assists in 20 appearances as he was later recognized with the Guy Lafleur Trophy as the playoff MVP.

“I think I saw a big change in my level,” Dobson told Andrew Gross of Newsday upon reflecting on last season. “I was able to dominate more at the junior level last year than my 17 year. I feel like I can have an opportunity to move on and play at (the NHL) level.

“At the end of the day, it’s not going to be my decision. All I can do is try to make it a tough decision.”