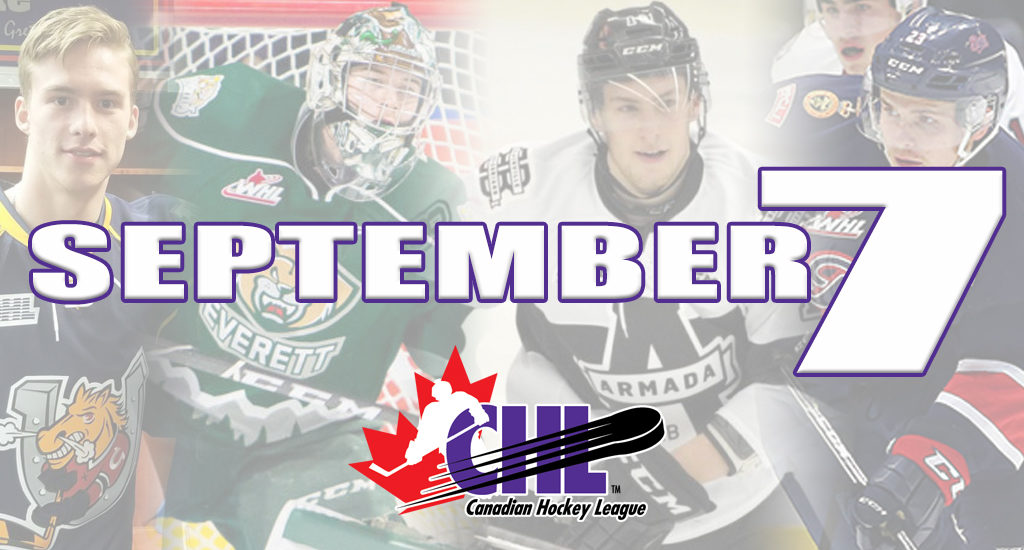 Though it seemed just yesterday the Windsor Spitfires were hoisting the Memorial Cup on home ice, here we are approaching mid-September with another season of Canadian Hockey League action set to get underway.

It’s always an exciting time of year with no shortage of good storylines to follow as teams from coast-to-coast establish their depth charts and make those final few difficult roster decisions as the pre-season draws to a close.

Here are seven interesting storylines to keep tabs on as we embark on the 2017-18 season that gets started in one week’s time.

Los Angeles Kings prospect Austin Wagner, sidelined for approximately six months following June surgery on a torn labrum and dislocated bicep tendon, could potentially find himself back with the Pats come mid-season despite being signed to an NHL contract by the Kings in March.

On a more sure note, reigning WHL Player of the Year Sam Steel, whose 131 points (50-81–131) led the league in scoring last season, is set to return to the lineup barring an extended look with the NHL’s Anaheim Ducks out of training camp. His presence would give the Pats a central cog in their offensive wheel that also includes offseason acquisition Matt Bradley and fellow overager Wyatt Sloboshan, Vegas Golden Knights second round pick Jake Leschyshyn and Colorado Avalanche prospect Nick Henry who is currently recovering from a shoulder surgery of his own.

2) Will the OHL’s Midwest be the premiere division once again?
It’s not often that three teams in the same division will flirt with the 100-point plateau, but the Erie Otters, Owen Sound Attack and London Knights all did so last year. The OHL champion Otters set a CHL record with their fourth consecutive 100-point campaign, defeating a 102-point Attack club in the OHL’s Western Conference Final. The London Knights finished with 99 points during the regular season, their sixth straight season with over 40 victories.

The defending three-time Midwest Division champion Otters will have their work cut out for them this season. As all teams inevitably do, the Otters will deal with graduation following their historic run centred around departing franchise cornerstones Dylan Strome (Arizona Coyotes), Alex DeBrincat (Chicago Blackhawks) and Darren Raddysh (Rockford IceHogs, AHL).

Though the Owen Sound Attack (Michael McNiven) and London Knights (Tyler Parsons) look as though they’ll lose star goaltenders to the pro ranks, both clubs are loaded with depth and talent, each entering 2017-18 as legitimate contenders for an OHL championship.

The Kitchener Rangers have a revamped blue line with the addition of Winnipeg Jets first round pick Logan Stanley from the Windsor Spitfires while Pittsburgh Penguins draftee Connor Hall looks to bounce back from an injury-shortened season. Florida Panthers prospect Adam Mascherin was one of three OHL players to record 100 points last season.

3) Who steps up in the Maritimes?
The defending QMJHL champion Saint John Sea Dogs won with a veteran club last spring, but with a youth movement headlined by 2018 NHL Draft prospect Joe Veleno in full swing under new head coach Josh Dixon, five other clubs have their sights set on ascending to the Maritimes throne.

Both teams that struggled through the 2016-17 season, the Moncton Wildcats and Sherbrooke Phoenix are looking like they’re on the rise.

The Wildcats acquired 2018 NHL Draft prospect Anderson MacDonald in an August trade with the Phoenix and feature a pair of 2017 first round QMJHL Draft picks in their lineup including preseason scoring leader Jakob Pelletier (6-4–10) and blueliner Jaxon Bellamy (4-2–6).

Sherbrooke is anchored in goal by St. Louis Blues prospect Evan Fitzpatrick while boasting two of the best defencemen in the QMJHL this season in Winnipeg Jets pick Luke Green and 2016-17 leading scorer Thomas Grégoire. 2017 second overall QMJHL Draft pick Samuel Poulin is a player to keep an eye on.

Top 2018 NHL Draft prospect Filip Zadina, chosen 11th overall by the Halifax Mooseheads out of the Czech Republic will also be a player to watch.

5) Who are the CHL’s top 2018 NHL Draft targets?
A new hockey season means turning our attention to another NHL Draft, one that will take place next June in Dallas, Texas.

The 2017 NHL Draft was heavy on forwards in the early going with the first seven CHL players off the board playing up front, but it looks as though more defencemen will be there for the taking next summer.

In goal, Canadian Ivan Hlinka standout Olivier Rodrigue of the Drummondville Voltigeurs is joined by other QMJHL talent in Kevin Mandolese of the Cape Breton Screaming Eagles and Alexis Gravel of the Halifax Mooseheads. Mississauga Steelheads sophomore Jacob Ingham and Seattle Thunderbirds playoff standout Carl Stankowski will also be on the radar come draft day.

Several of these names will no doubt be included on 2018 Sherwin-Williams CHL/NHL Top Prospects Game rosters. The annual event is scheduled for Thursday January 25, 2018 in Guelph, ON.

So the question is, who will do so this season?

There’s a long list of possible names from the 1998 and 1999-born age groups, a few of which include 2017 first overall pick Nico Hischier (New Jersey Devils) of the Halifax Mooseheads, second overall pick Nolan Patrick (Philadelphia Flyers) of the Brandon Wheat Kings as well as a host of other early first round selections from this past June. Additionally, high 2016 picks in third overall choice Pierre-Luc Dubois (Columbus Blue Jackets) of the Blainville-Boisbriand Armada, former Mastercard Memorial Cup champions Olli Juolevi (Vancouver Canucks) of the London Knights, Mikhail Sergachev (Tampa Bay Lightning) and Logan Brown (Ottawa Senators) of the Windsor Spitfires will put their best foot forward out of training camp.

7) Who will earn World Junior jobs?
Always thought-provoking at the beginning of a new season is the debate of who will step up to represent Canada at the World Juniors come Christmas time?

Goaltending is always a hot-button issue, but Hart, a back-to-back WHL Goaltender of the Year recipient drafted by the Philadelphia Flyers, appears to be a safe bet for one of those two jobs.

Who will join him?