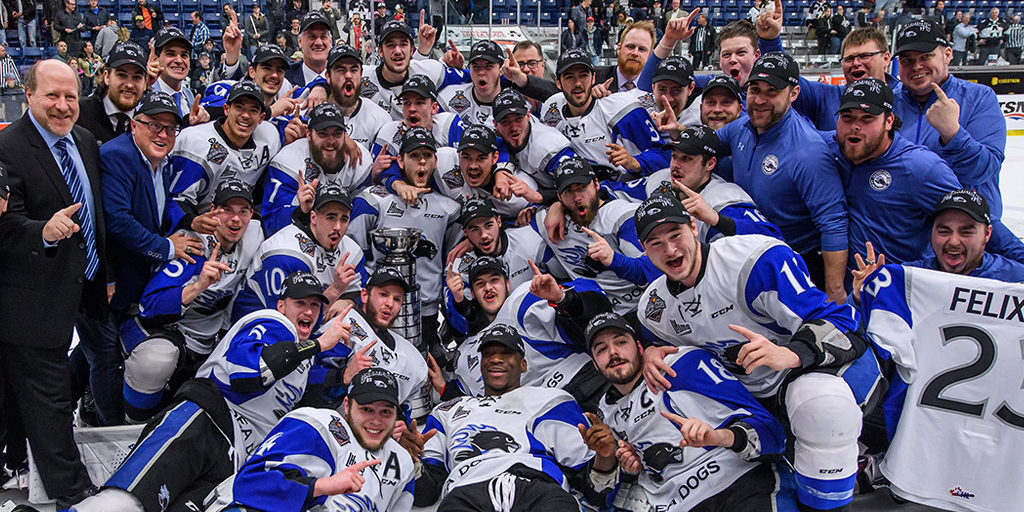 The Saint John Sea Dogs are 2017 QMJHL Champions following a 5-1 road victory over the Blainville-Boisbriand Armada on Wednesday.

Overage captain Spencer Smallman scored twice and had an assist as the Sea Dogs captured their third President Cup title in franchise history following other championships in 2011 and 2012.

Ottawa Senators first round selection Thomas Chabot had a pair of assists in the win and was awarded the Guy Lafleur Trophy as QMJHL Playoff MVP after leading defencemen with 23 points (5-18–23) over 18 playoff contests. Chabot is the first defenceman to earn the honours since Danny Groulx of the Victoriaville Tigres in 2002.

Tampa Bay Lightning prospect Bokondji Imama opened the scoring 7:29 into the first period before Smallman made it 2-0 on the power play with 2:22 left in the opening frame.

Blainville-Boisbriand battled back in the second on a power play goal from Pierre-Luc Dubois but the Sea Dogs quickly neutralized the Armada momentum. Montreal Canadiens prospect Simon Bourque responded under two minutes later at 15:21 with Smallman drawing an assist.

Smallman added a power play marker 5:16 into the third before Chicago Blackhawks prospect Matthew Highmore found the back of the net with 4:53 remaining to secure the 5-1 victory.

Saint John outshot Blainville-Boisbriand 34-21 and went 2-for-8 on the power play.

Carolina Hurricanes draftee Callum Booth led all netminders with a 1.67 goals-against average, going 16-2 with a .923 save percentage and four shutouts in the process.

Saint John’s journey to becoming President Cup Champions saw them play to an overall record of 16-2, earning successive sweeps over Rimouski and Val-d’Or in the first and second rounds. They proceeded to eliminate the Chicoutimi Sagueneens 4-2 in the QMJHL Semi-Final before ousting Blainville-Boisbriand in four straight games.

The Sea Dogs will make their third Mastercard Memorial Cup appearance next week in Windsor when they take on the host Spitfires to open the tournament on Friday May 19th.

Saint John won a Mastercard Memorial Cup title with a team led by present day Florida Panthers star Jonathan Huberdeau in 2011. They were defeated in the Semi-Final by the host Shawinigan Cataractes a year later in 2012.

Each game of the 2017 Mastercard Memorial Cup will be televised on Sportsnet and TVA Sports.