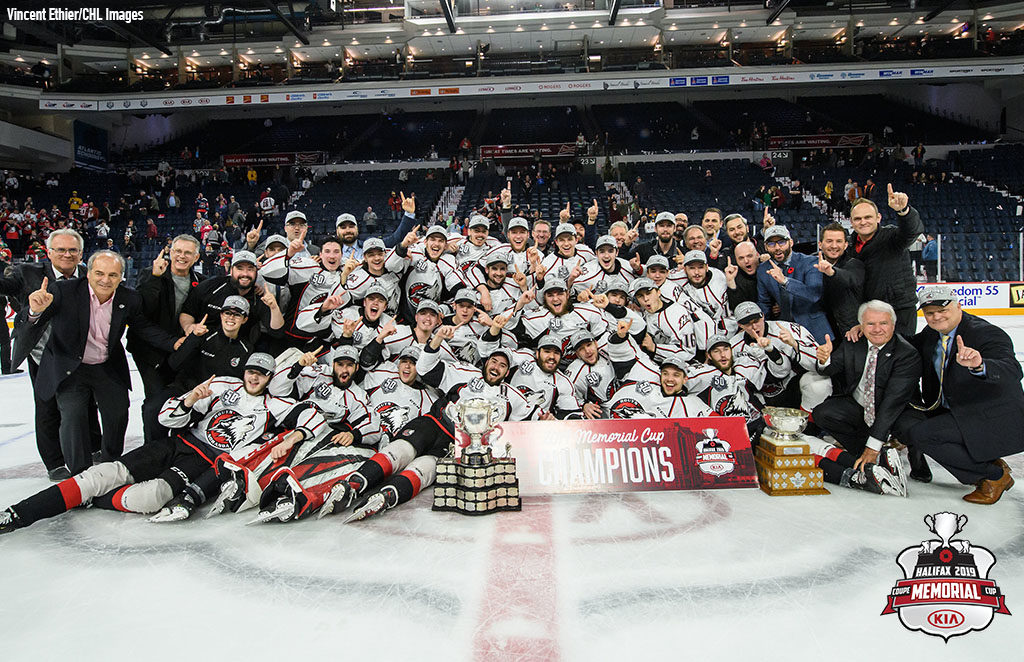 Halifax, NS – The Rouyn-Noranda Huskies are Memorial Cup Presented by Kia champions for the first time in franchise history, demonstrating true resilience in overcoming a 2-0 deficit to defeat the host Halifax Mooseheads 4-2 before a crowd of 10,595.

Félix Bibeau, Joël Teasdale, Peter Abbandonato and Vincent Marleau found the back of the net for the Huskies as Rouyn-Noranda scored four unanswered, outshooting Halifax 35-25.

“All of our players grew up together and for me it’s an amazing group,” said Huskies head coach Mario Pouliot during post-game celebrations. “To win the President Cup, to win the Memorial Cup you need a special group and they’ve done special things.

“Just amazing character,” he continued. “You saw them today, we were trailing 2-0 and again Harvey-Pinard put pressure off the faceoff and Bibeau scored a nice goal and after that we were playing with a lot of confidence.”

The Mooseheads ended an eventful first period with a jolt of momentum as Samuel Asselin recorded his third of the tournament on a rebound in tight. The eighth goal of Asselin’s Memorial Cup career sent Halifax flying into the second period where Raphaël Lavoie extended the lead to two.

The big draft-eligible Lavoie struck on a breakaway 5:26 into the second as teammate Benoit-Olivier Groulx came out of the penalty box and forced a Rouyn-Noranda turnover at centre ice. Lavoie beat Samuel Harvey on the forehand through the five-hole as Halifax was in full control.

Rouyn-Noranda began the march back to victory on a four-on-four five minutes later as Bibeau recorded his fifth of the tournament at 10:27. The Huskies won an offensive one draw before captain Rafaël Harvey-Pinard lugged the puck into the slot where Bibeau chipped a shot over the shoulder of Alexis Gravel.

Montreal Canadiens prospect Joël Teasdale scored the equalizer five minutes later at 15:11, teaming up with tenacious forechecker Tyler Hinam who won a board battle to allow Teasdale to beat Gravel on a quick wraparound.

The two sides were knotted at two after two as Rouyn-Noranda wrestled away the momentum, outshooting Halifax 14-6 in the middle frame.

The Huskies pulled away in the third as Peter Abbandonato struck off the rush, entering the zone with speed before taking a pass from Jakub Lauko for the finish past the glove of Gravel at 3:02.

Vincent Marleau provided Rouyn-Noranda with insurance two minutes later at 5:03 after the Huskies controlled the play along the boards. Mathieu Gagnon sent a low shot on the Halifax goal, inspiring a rebound for Marleau who provided the finish to put his team in the lead 4-2.

The Huskies outshot the Mooseheads 11-9 in the third to hear the final horn sound, streaming onto the ice in celebration.

“It’s incredible,” said Huskies captain Rafaël Harvey-Pinard. “We worked all season long for this. We had a great season, great playoff, we just needed the Memorial Cup to have a perfect season and now we have it.”

Harvey-Pinard was joined by fellow veterans Peter Abbandonato, Samuel Harvey and Jacob Neveu at centre ice to receive the Memorial Cup from CHL President David Branch. The latter three names reached overtime of the 2016 Memorial Cup Final in Red Deer before falling in a crushing loss to the London Knights.

“They came so close to the Cup in 2016 and they deserved that one,” said Harvey-Pinard. “I was happy to be with them beside the Memorial Cup tonight.”

The third straight host to reach the Championship Final, the Halifax Mooseheads played to a 49-win season before finishing the QMJHL Playoffs as league finalists. They skated to a 2-2 record at the Memorial Cup Presented by Kia, being led in scoring by Maxim Trépanier who had six points (1-5–6) in four games.

The Huskies and Mooseheads squared off in the first all-QMJHL Memorial Cup Championship Final since 2006, wrapping up the QMJHL’s 50th anniversary season in fitting style.

The Memorial Cup has been in competition since 1919, first presented in commemoration of the many great Canadian players who paid the supreme sacrifice in defence of their country in the First World War. Initially the symbol of the national junior championship, the Cup later signified Junior ‘A’ supremacy beginning in 1934 and Major Junior supremacy in 1971.

Competing annually, the winners of the Western, Ontario and Quebec Major Junior Hockey Leagues, along with a host Club, vie for the Memorial Cup Championship.