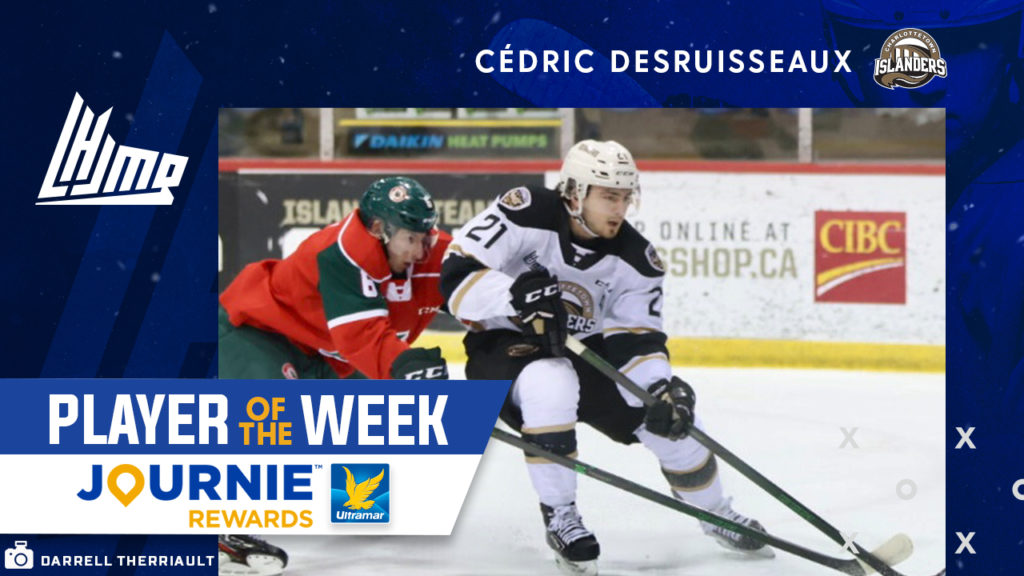 The latest Ultramar Player of the Week is Charlottetown Islanders winger Cedric Desruisseaux. In three home games, the 20-year-old from Victoriaville, Quebec went on a tear, scoring six times and adding six assists as the Isles went undefeated.

On Wednesday night, Desruisseaux collected three goals to go along with a pair of helpers in the Islanders’ 7-0 blanking of the Halifax Mooseheads. It was the second hat trick and 11th multi-point game of the season for Desruisseaux, who was an easy choice for first star of the contest.

On Friday night, the fifth-year veteran would collect his 26th goal of the campaign to get the Isles on the board in the second period before chipping in another two assists in his club’s 4-3 overtime triumph over the Mooseheads. Desruisseaux’s third point of the game would help set up the winning goal at the 45-second mark of the fourth period.

Desruisseaux would again assist on the eventual game-winning goal on Saturday night against the Cape Breton Eagles. This was part of a two-goal, two-assist evening that extended his latest point streak to nine games. The dynamic veteran would be named the third star of this game, an 8-2 Islanders victory.

Desruisseaux currently leads the league in goals (28) and points (49). Both are career highs for the Islanders’ Assistant Captain despite suiting up for just 24 games so far in this shortened season. A first round selection of the Victoriaville Tigres at the 2016 QMJHL Draft, Desruisseaux was acquired by the Isles from the Drummondville Voltigeurs during the 2019 off-season.