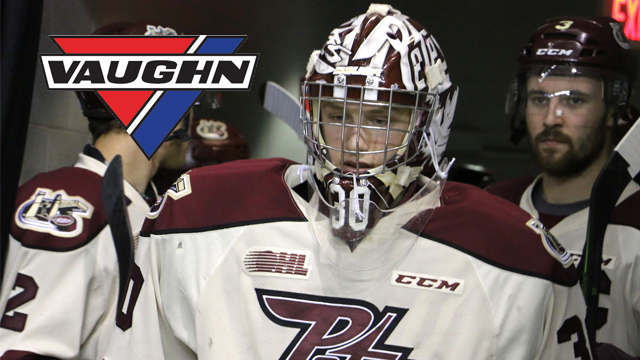 Toronto, ON – The Canadian Hockey League today announced that Edmonton Oilers prospect Dylan Wells of the Peterborough Petes is the Vaughn CHL Goaltender of the Week for the playoff week ending April 16 after posting a 2-0 record with a goals-against-average of 1.50 and save percentage of .957.

Wells made 66 saves in a pair of road victories last week backstopping the Petes to a berth in the OHL’s Eastern Conference Championship Series following a four-game series win over the Kingston Frontenacs.  He made 33 saves in both contests including last Tuesday in Game 3 where he earned first star honours in a 3-1 victory, and Thursday’s Game 4 where the Petes clinched the series with a 6-2 victory for their eight-straight win this post-season.  In that contest, Wells etched his name in team records becoming the first Petes goaltender and just the ninth OHL netminder all-time to score a goal after firing a shot from behind his own goal-line across the ice and into the empty cage.  The Petes will now face the Mississauga Steelheads in round three action beginning Thursday.

A 19-year-old from St. Catharines, Ont., Wells is playing in his third OHL season with the Petes after being chosen by the club in the second round of the 2014 OHL Priority Selection.  This season he carried a 33-15-2-2 record for the East Division champs with a goals-against-average of 3.07 and save percentage of .916.  The fifth round pick of the Oilers in the 2016 NHL Draft has an eight-game winning-streak to open the post-season where both his GAA and SV% have improved to marks of 1.94 and .944 respectively.