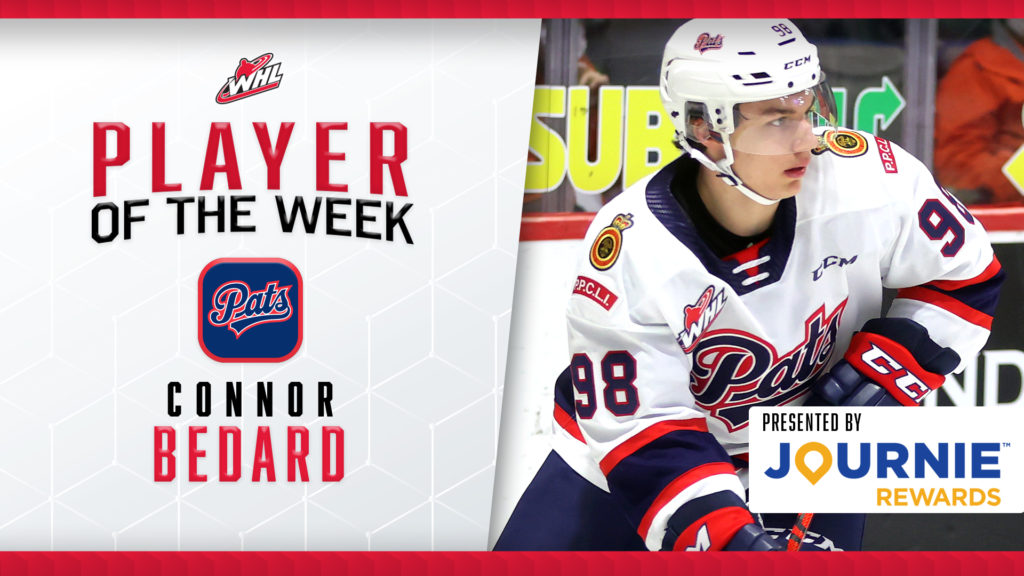 Bedard, a 15-year-old playing with exceptional status, recorded nine points (2G-7A) and a plus-5 rating in four games this past week, as the Pats went 2-2-0-0 in the WHL’s Subway Hub Centre in Regina.

On Monday, March 29, the product of North Vancouver enjoyed the first four-point night (1G-3A) of his WHL career, as the Pats knocked off the Swift Current Broncos by a 9-4 score. Bedard’s second period goal served as the insurance marker and all three of his assists were of the primary variety. He was named first star of the game.

Tuesday, March 30, Bedard followed up with another multi-point effort, record two points (1G-1A) in a 3-2 overtime win against Moose Jaw. Bedard opened the scoring in the second period before springing defenceman Layton Feist on a breakaway in overtime, leading to the winning goal.

On Thursday, April 1, Bedard secured a helper on a third period goal from Carson Denomie as the Pats fell 7-2 at the hands of the Brandon Wheat Kings.

Saturday, April 3 featured another multi-point performance from Bedard, as he notched two assists in a 5-2 loss to the Winnipeg ICE.

Through 12 games of the 2020-21 WHL season, Bedard leads the entire WHL in scoring with 22 points (8G-14A). He also has a 12-game point streak to his name, having hit the scoresheet in every game since he made his WHL debut on Friday, March 12.

Bedard was originally selected by the Pats with the first-overall pick in the 2020 WHL Draft. He was granted exceptional player status by Hockey Canada and BC Hockey on March 24, 2020, becoming the first player in Western Canada to receive the status.

On April 1, he was one of 10 WHL players named to represent Canada at the 2021 IIHF U18 World Championship, set to begin April 26 in Texas.

Bedard and the Pats will return to action in the WHL’s Subway Hub Centre today at 4 p.m. MT when they take on the Moose Jaw Warriors.