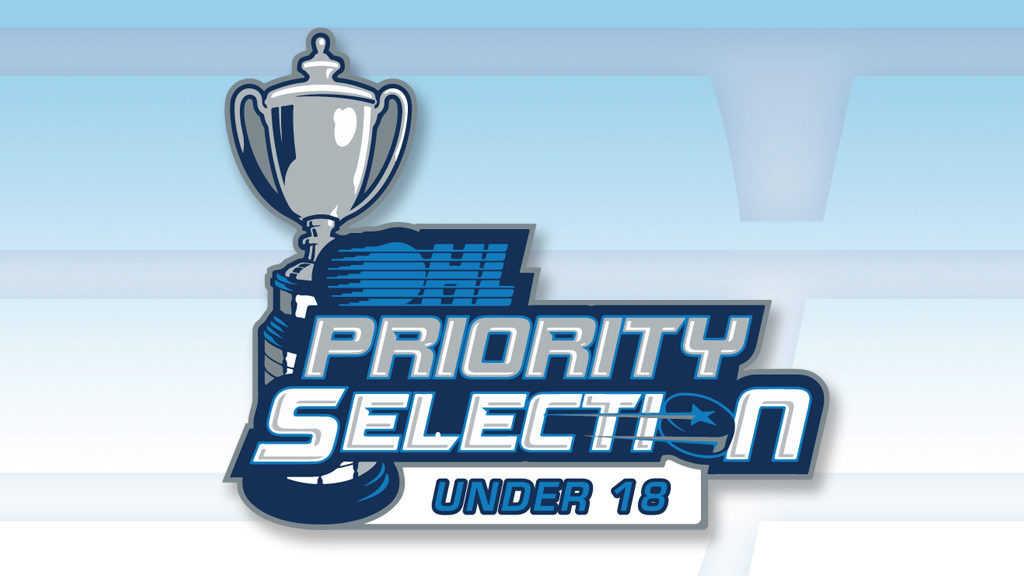 The annual Under-18 Priority Selection was held entirely online, adhering to all government and public health COVID-19 physical distancing guidelines at both the League and member team levels. This year’s unique approach to a very special day was conducted in the interest of ensuring the health and safety of prospects, their families as well as OHL member team and League personnel.

Eligibility for the 2021 OHL Under-18 Priority Selection included all U18 players (2003 and 2004 birth years) not currently on an OHL Member Team Protected List who were carded with an Ontario based U18 AAA Hockey Club within the Ontario Hockey Federation, Hockey Eastern Ontario or Hockey Northwestern Ontario in the current season.

A total of 50 players were selected from 34 different teams and included 21 forwards, 19 defencemen and 10 goaltenders. 49 of the 50 players selected were born in 2004.

“Congratulations to all 50 players selected today,” said OHL Director of Player Recruitment Kyle Pereira. “It’s an exciting day for players, family members, coaches and teammates to celebrate perseverance through a trying season that had its share of challenges for everyone. The Under-18 Priority Selection has provided the OHL with a number of quality players since its inception in 2017, and it presents another opportunity for prospects to further their development and showcase themselves in an effort to become the best player they can be.”

Winners of the Under-18 Priority Selection Draft Lottery back on May 5, the London Knights used the first overall pick to select centreman Abakar Kazbekov from the Mississauga Senators U18 program. A 6-foot-1, 177Ib. left-shot originally hailing from Russia before spending his 2019-20 campaign with the Vaughan Kings U16 team, Kazbekov becomes the Knights’ highest-selected player in the five-year history of the event. The Saginaw Spirit followed-up with the selection of Soo Jr. Greyhounds winger Calem Mangone before the Soo Greyhounds rounded-out the top three adding Whitby Wildcats right-winger James Johnson.

All OHL member teams were required to draft a minimum of two players, however to enhance opportunities specifically for goaltenders, clubs selecting a goaltender with one of their selections had the option to select another player (skater only) in a third round.

The OHL Under-18 Priority Selection was conducted in partnership with RinkNet as picks were submitted online by OHL member clubs and displayed in real time at ontariohockeyleague.com. The selections were also streamed live on the OHL’s YouTube channel.

WHL
RE/MAX WHL Play of the Year: Matchup #3 – Gauthier vs. Nielsen
22 hours ago