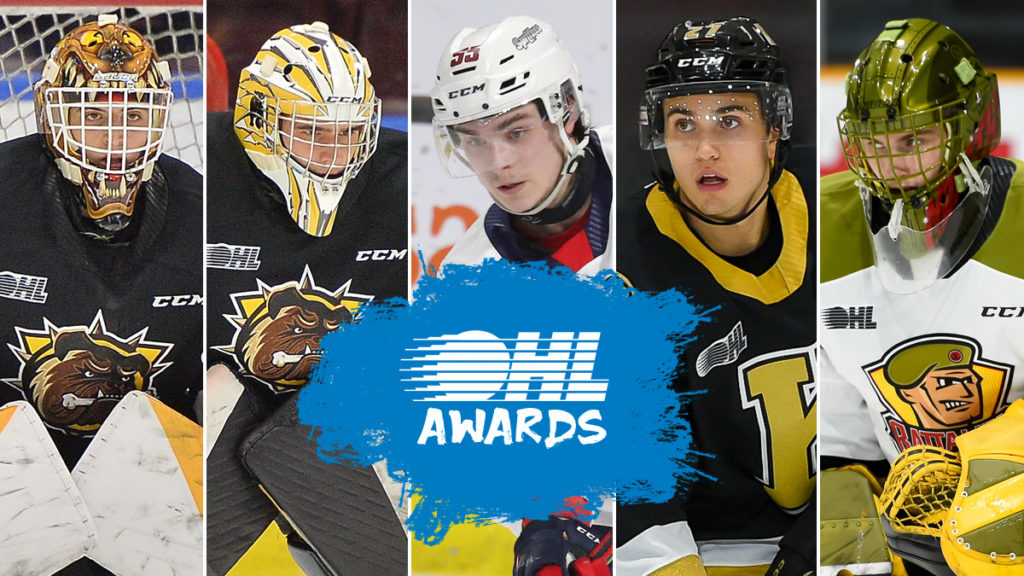 Toronto, Ont. – The Ontario Hockey League today announced recipients of four of the league’s annual awards following the conclusion of the 2021-22 regular season.

Offensively, Wyatt Johnston of the Windsor Spitfires captured the Eddie Powers Memorial Trophy as the league’s leading scorer while Lucas Edmonds of the Kingston Frontenacs is the recipient of the Jim Mahon Trophy as the OHL’s top-scoring right winger. Recognizing defensive efforts, the Hamilton Bulldogs goaltending tandem of Marco Costantini and Matteo Drobac earns the Dave Pinkney Trophy, surrendering a league-low 176 goals against. North Bay Battalion rookie Dom DiVincentiis is the recipient of the F.W. “Dinty” Moore Trophy awarded to the rookie with the lowest goals-against average. 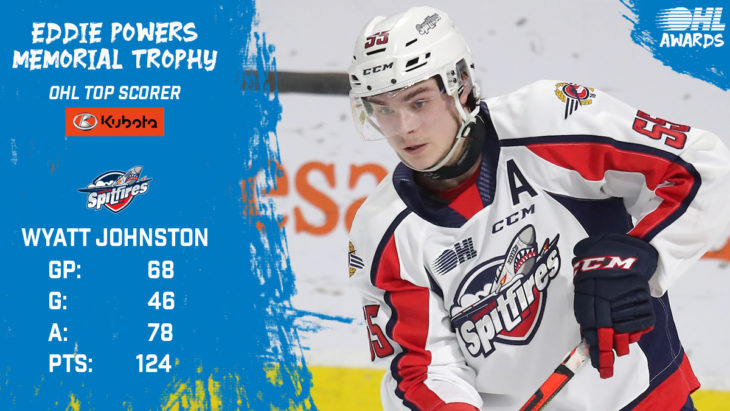 Eddie Powers Memorial Trophy (Top Scorer) – Wyatt Johnston, Windsor Spitfires
Dallas Stars prospect Wyatt Johnston is the recipient of the OHL Top Scorer Award presented by Kubota Canada, claiming the Eddie Powers Memorial Trophy with 124 points including 46 goals and 78 assists in 68 games. Johnston boasted a plus-29 rating to go with a league-leading 1.82 point-per-game production rate. Johnston’s 124 points are the most by an OHL scoring leader since Erie’s Alex DeBrincat in 2016-17.

The 23rd overall pick of the 2021 NHL Draft by the Dallas Stars, Johnston has collected 58 goals, 96 assists and 154 points through 121 career regular season games with the Spitfires, who selected him with the sixth overall pick of the 2019 OHL Priority Selection. He’ll be making his OHL playoff debut this week when the Spitfires open up their first round series against the Sarnia Sting.

The Eddie Powers Memorial Trophy was donated by the Toronto Marlboro Athletic Club in memory of Eddie Powers and was first awarded in 1945-46 to Tod Sloan of St. Michael’s who scored 79 points in 25 games. High-scoring Stars winger Jason Robertson was the 2018-19 recipient as a member of the Niagara IceDogs while veteran Dallas centreman Tyler Seguin has his named inscribed on the trophy as a member of the Plymouth Whalers in 2009-10. 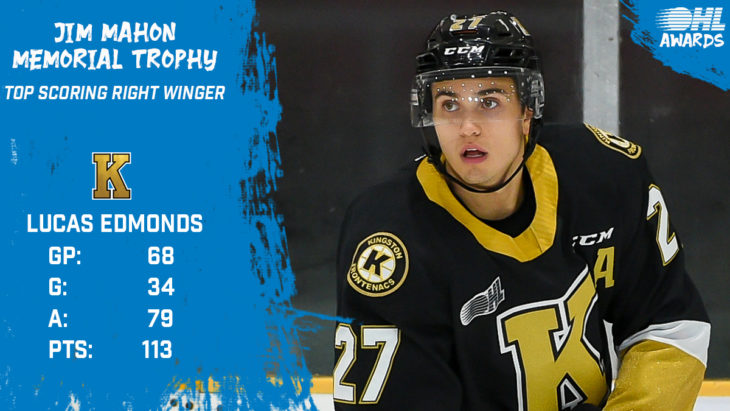 The 21-year-old originally from North Bay, Ont. turned heads this past season, leading the Frontenacs offensively with 30 different multi-point appearances including nine different instances with at least four points.

Edmonds joins David Ling (1994-95) as just the second Frontenacs player to ever claim the honour, finishing with the Kingston franchise’s sixth-highest assist total of 79. Edmonds’ 113 points are the most by a Frontenac since Ling put up 135 during the 1994-95 season.

Originally Kingston’s seventh round pick in the 2017 OHL Priority Selection, Edmonds made the most of a rare first-year overage season and is eligible for the 2022 NHL Draft in July.

The Jim Mahon Trophy was first presented following the 1971-72 season by the players and management of the Peterborough Petes in memory of their right winger Jim Mahon who was accidentally killed that summer. Arthur Kaliyev of the Hamilton Bulldogs last received the honour in 2019-20 while other recent winners have included Justin Brazeau of the North Bay Battalion in 2019 and Jordan Kyrou of the Sarnia Sting in 2018. 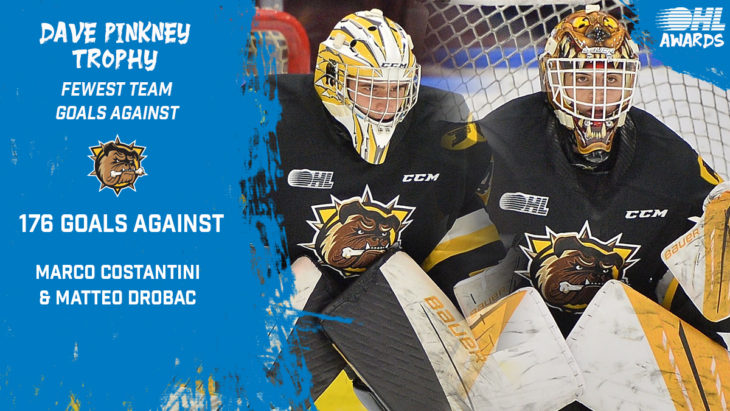 Costantini and Drobac backstopped the Bulldogs to the club’s first Hamilton Spectator Trophy as OHL Regular Season champions as the club boasted an overall record of 51-12-3-2 for a franchise record 107 points.

Costantini led the league in goals-against average (2.32), save percentage (.917) and shutouts (6), establishing new Bulldogs single season records in those three categories while also playing to a mark of 31-9-2-2. Hamilton’s new career shutouts leader, Costantini ended the season with 17 consecutive wins dating back to February 16th. The 19-year-old hometown product was Hamilton’s fifth round pick in the 2018 OHL Priority Selection.

Drobac played to a record of 19-2-1-0, posting a 2.57 goals-against average and .905 save percentage with one shutout over 23 games in his first full OHL season. The Oakville, Ont. product was Hamilton’s sixth round pick in the 2019 OHL Priority Selection.

This marks the first time the Bulldogs have earned the honour, but the Dave Pinkney Trophy has a prior history in Hamilton. Al Jensen of the 1977-78 Hamilton Fincups has his name inscribed on the trophy, as does the Hamilton Red Wings tandem of Jim Rutherford and Gerry Gray in 1967-68, Bud Blom in 1960-61 and Dennis Riggin of the Hamilton Tiger Cubs in 1953-54.

The Dave Pinkney Trophy is awarded annually to the goaltending tandem from the team that allows the fewest goals against during the regular season. 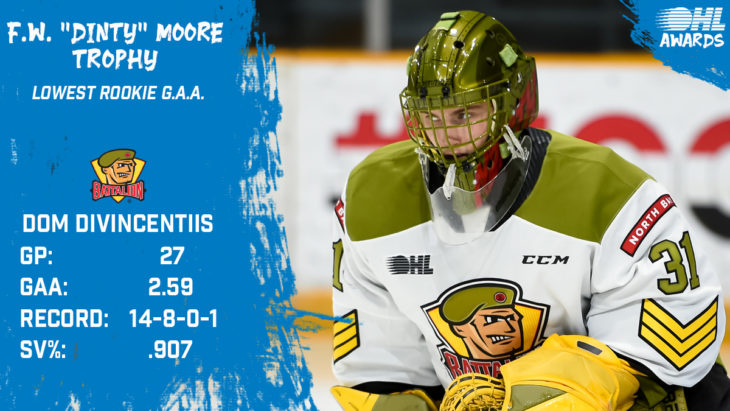 An 18-year-old draft eligible goaltender from Bolton, Ont., DiVincentiis helped backstop the Battalion to a Central Division title, playing to a record of 14-8-0-1 with a .907 save percentage to accompany his 2.59 goals-against average. He was undefeated in regulation through his final eight starts of the season. DiVincentiis was North Bay’s sixth round pick in the 2020 OHL Priority Selection.

DiVincentiis follows Matej Machovsky (2010-11) as the second Battalion goaltender to ever earn the distinction. He’s the third North Bay goaltender to do so, joining Scott Roche (1993-94) and Sandy Allan (1991-92) of the Centennials.

The trophy is named after F.W. “Dinty” Moore of Port Colborne, Ont., who served as OHA President from 1942-45. In order to qualify for this rookie award, a goaltender must play a minimum of 900 minutes. The most recent past recipient of the award was Brett Brochu of the London Knights in 2019-20.

For a look at the history of the Ontario Hockey League’s award recipients, click here