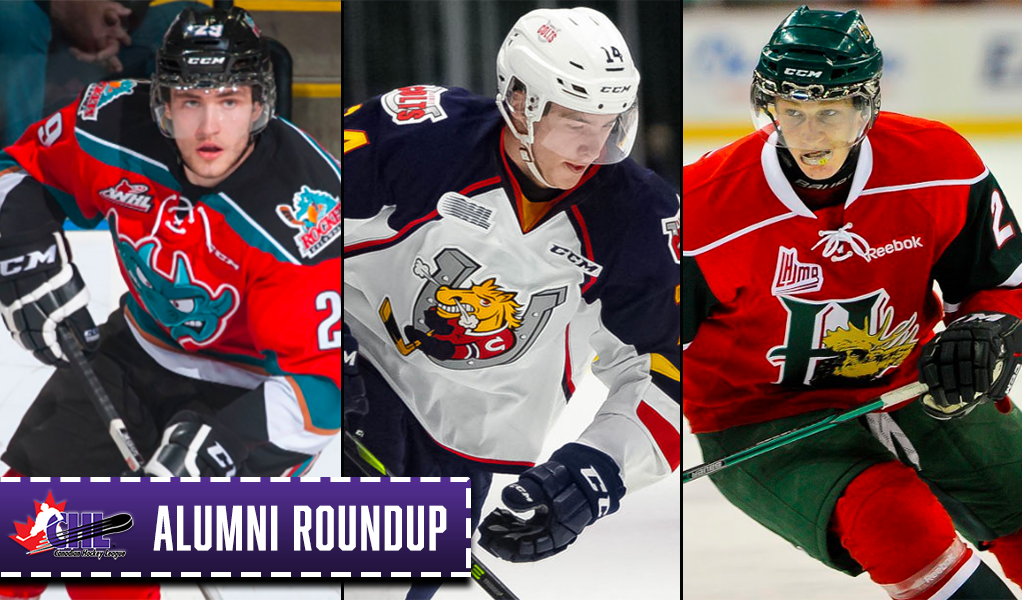 Even though the puck drops on the Canadian Hockey League season in September, October might just be the most wonderful time of the year for hockey fans.

It marks the official return of our great game in all forms and in all leagues where hundreds of CHL alumni continue to make their mark.

Here’s a look back at some of the most notable performances to open the 2019-20 season:

Four of the NHL’s top five scorers are CHL grads led by Leon Draisaitl (Kelowna Rockets) of the Edmonton Oilers who scored 12 goals and 13 assists for 25 points in just 14 games.  The 2015 Memorial Cup MVP was just one goal shy of tying the great Wayne Gretzky’s (Soo Greyhounds) October franchise best of 13 tallies in as many games back in 1981.

John Carlson (London Knights) of the Washington Capitals had an October for the ages pacing all defencemen in all offensive categories with 23 points including seven goals and 16 assists in just 14 games.  He was also just shy of setting an all-time October record among blue liners behind only Al MacInnis (Kitchener Rangers) who posted 25 points back in 1990.

2013 Memorial Cup champion and MVP Nathan MacKinnon (Halifax Mooseheads) of the Colorado Avalanche has recorded a point in all 12 of his games so far this season becoming just the fifth player in the last 20 years to accomplish such a feat.

Nathan MacKinnon of the @Avalanche is the fifth player in the last 20 years to record a season-opening point streak of 12+ games. https://t.co/PfdrjhCXMo #NHLStats pic.twitter.com/t1WioEqggX

Goals of the Year?

It’s still early but conversations about NHL goals of the year have begun and feature a trio of former CHL stars including 2018 CHL Top Prospect of the Year award winner Andrei Svechnikov (Barrie Colts) of the Carolina Hurricanes, 2016 Memorial Cup OT hero Matthew Tkachuk (London Knights) of the Calgary Flames, and Sonny Milano (Plymouth Whalers) of the Columbus Blue Jackets.

Y'all still buzzing about this Andrei Svechnikov (@ASvechnikov_37) goal?

BECAUSE WE STILL ARE. pic.twitter.com/1UbqexwFW7

A pair of Anaheim Ducks defencemen set team records, both on October 29, in a 7-4 win over the Winnipeg Jets.

Cam Fowler talks about passing Scott Niedermayer for the franchise lead in goals by a defenseman and Josh Mahura's role in the 7-4 win over Winnipeg. pic.twitter.com/YY148f6UM6

The Heritage Classic in Regina was the league’s first outdoor game of the season featuring the Winnipeg Jets and the Calgary Flames at Regina’s Mosaic Stadium.

It took extra hockey to get it done, but Bryan Little grabbed the @NHLJets the W in @EASPORTSNHL OT at the #HeritageClassic. pic.twitter.com/Tn0EwpS530

All-time Barrie Colts scoring leader Bryan Little, who put up 342 points over a four year span in the CHL from 2003-07, was the overtime hero giving the Jets their first win in an outdoor game.

Milestones for Marleau and Maurice:

From 143 games with the Seattle Thunderbirds to 1,500 over 20 seasons as a member of the San Jose Sharks Patrick Marleau became just the seventh player in NHL history to hit that figure with the same team.

Patrick Marleau of the @SanJoseSharks is the seventh player in NHL history to appear in 1,500+ games with one franchise. #NHLStats pic.twitter.com/dpFgHa7HvZ

Paul Maurice of the @NHLJets is the seventh head coach in NHL history to reach the 700-win milestone. https://t.co/Fr7nzKt9BU #NHLStats pic.twitter.com/BaTduiUOmY

2018 CHL Goaltender of the Year Carter Hart (Everett Silvertips) became the youngest Philadelphia Flyer to record a shutout when he stopped all 25 shots he faced in the club’s home opener.

First career shutout for the kid.

Reid Boucher (Sarnia Sting) of the Utica Comets is the AHL Player of the Month for October with 13 points in eight games helping his team open the season undefeated.

10 goals and 13 points in eight games. It's no surprise that Reid Boucher is your CCM/AHL Player of the Month!

Third year University of Calgary Dino Matt Alfaro who joined the USPORTS circuit after four years between the Kootenay ICE and the Lethbirdge Hurricanes currently leads the country in scoring with 17 points including eight goals through eight games.