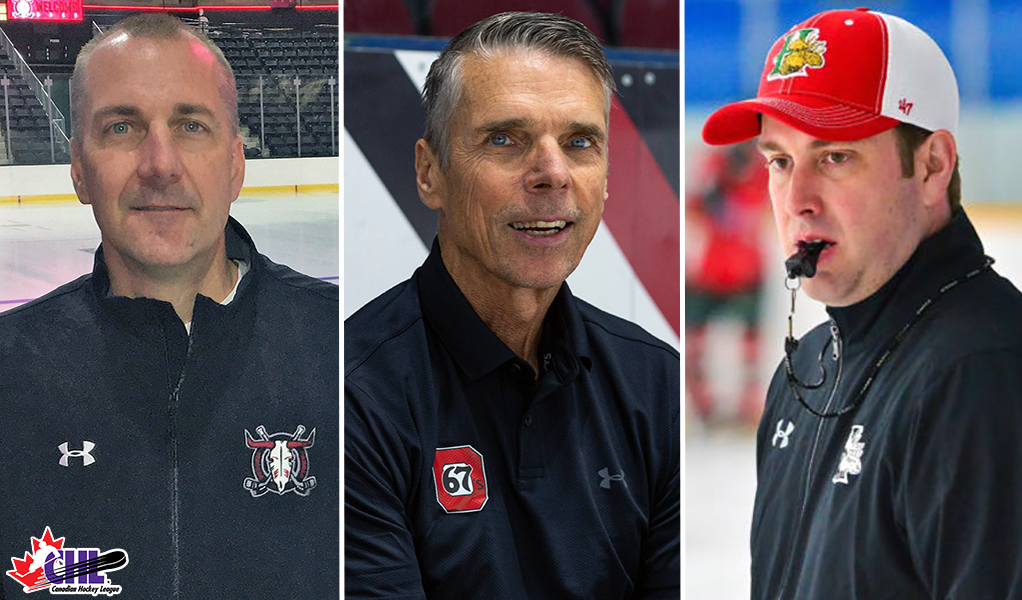 As puck drop nears for the 2021-22 campaign, all 60 Canadian Hockey League clubs will unveil new-look lineups, while a handful of squads will also be guided by a new voice from behind the bench:

Barrie Colts: Last seen in the junior circuit behind the bench of the Niagara IceDogs from 2010-16, Marty Williamson was appointed senior advisor of the Colts in 2019 while the coming season will see him take on the head coach and general manager duties. Williamson’s appointment brings a familiar face to the Barrie community as the 58-year-old previously led the Colts from 2004-10.

Flint Firebirds: The Firebirds will have no shortage of experience behind the bench with 51-year-old Ted Dent who brings with him a decorated resume highlighted by a decade-long run with the AHL’s Rockford IceHogs in which he served as an assistant for four years before being elevated to the top spot. Dent’s history with the CHL includes a lone season as an associate coach with the Niagara IceDogs in 2017-18.

Halifax Mooseheads: An assistant coach with the Mooseheads for the past four seasons, Sylvain Favreau elevates to the top job for the coming campaign where he brings with him a key familiarity with much of the team’s roster. Favreau, 43, has also earned opportunities behind the bench with Hockey Canada’s Program of Excellence, most recently leading Team Canada White at the 2019 World Under-17 Hockey Challenge.

Hamilton Bulldogs: Following a four-year run as head coach of the Kitchener Rangers from 2016-20, Jay McKee is back behind the bench with the Bulldogs for the coming season. An OHL alumnus who laced up with the Sudbury Wolves and Niagara Falls Flyers from 1993-96, the 44-year-old McKee has also earned international recognition, including an assistant coaching stint with Team Canada Black at the 2015 World Under-17 Hockey Challenge.

Kingston Frontenacs: First-year head coach Luca Caputi will have one of the most desired weapons in his arsenal next season – the ability to deploy budding superstar and 2022 NHL Draft favourite Shane Wright at will. An OHL veteran who skated four seasons with the Mississauga/Niagara IceDogs, the 32-year-old Caputi steps into the top job this season after handling assistant duties with Guelph and Kingston over the past six campaigns.

The Kingston Frontenacs Hockey Club is excited to announce the promotion of Luca Caputi to the Head Coaching role.

Oshawa Generals: After a decade-plus of paying his dues as an assistant with the Barrie Colts and Brandon Wheat Kings, Todd Miller has earned his opportunity as a first-time head coach of the Generals. The 43-year-old also brings with him a key ability to relate to his players as the former forward played three seasons in the OHL from 1995-98, making stops with Sarnia, Owen Sound, North Bay, and the Soo.

Ottawa 67’s: With change comes opportunity and that was the case in the Canadian capital following Andre Tourigny’s promotion to the Arizona Coyotes. The 67’s then turned to a familiar face to the local market and a junior hockey dynamo in Dave Cameron. The 63-year-old brings with him a wealth of experience that includes a head coaching and GM background with the Toronto/Mississauga St. Michael’s Majors, a six-year run with the Ottawa Senators including two seasons as head coach, plus plenty of experience on the international stage that he will add to this winter as the Canadian bench boss at the 2022 World Juniors.

Owen Sound Attack: Following a three-year run behind the bench in Oshawa, Greg Walters was appointed head coach of the Attack in late June. A solid offensive producer as a player, the former forward skated three seasons with the Ottawa 67’s from 1987-90 in which he racked up 164 points in 154 games. Walters, 51, then returned to the league in 2002 as an assistant coach with the Sarnia Sting.

Red Deer Rebels: A new era begins in Central Alberta with Steve Konowalchuk taking the reins of the Rebels. A seasoned junior coach who guided the Seattle Thunderbirds from 2011-17, Konowalchuk’s coaching resume also includes past assistant roles with the Anaheim Ducks and Colorado Avalanche. The 48-year-old also brings no shortage of pedigree highlighted by a Four Broncos Trophy win during his two seasons with Portland from 1990-92.

Rouyn-Noranda Huskies: Youthful exuberance and a critical ability to relate to his players will be hallmarks for new Huskies head coach Brad Yetman. An assistant with the club for the past two seasons, the 30-year-old also previously played four seasons in the QMJHL from 2007-11 that counted stops with Shawinigan, Prince Edward Island, and Rouyn-Noranda, where he served as an alternate captain.

Saint John Sea Dogs: Veteran bench boss Gordie Dwyer is back in the QMJHL following previous stints at the helm of Prince Edward Island/Charlottetown and Shawinigan, where he will guide a club with aspirations of hosting the Memorial Cup. A former forward, the 43-year-old Dwyer claimed a league playoff title as part of the 1995 Hull Olympiques before going on to a well-travelled career that counted 105 games at hockey’s highest level.

Sarnia Sting: With the majority of his playing career spent overseas in Germany and Croatia, Alan Letang brings with him a unique vantage point as head coach of the Sting, his latest opportunity after spending the past five seasons as part of the Owen Sound Attack, including the latter two as head coach. Letang, 46, has also earned international acclaim, serving as an assistant at the 2020 World Juniors.

Saskatoon Blades: Brennan Sonne returns to the circuit as a first-time WHL coach after previously serving as an assistant coach with Everett from 2014-17, while the past four seasons saw him in the top job with Angers of the top-level league in France. A former forward, the 34-year-old played three seasons with Everett, Red Deer, and Edmonton from 2005-08.

Shawinigan Cataractes: The Cataractes have turned to a familiar face in Daniel Renaud who previously manned the club’s bench from 2017-20 before a season-and-a-half stopover with Val-d’Or. The 54-year-old carries an extensive resume that also includes assistant roles with Rimouski and Quebec, in addition to appointments with Team Canada.

Sudbury Wolves: The Wolves turned to one of their more decorated alumni to fill their coaching vacancy, tapping former forward Craig Duncanson for the role. Playing three seasons with the Wolves from 1983-86 before later joining the Cornwall Royals, Duncanson went on to an extensive pro career that counted more than 500 games in the AHL. The 54-year-old also brings with him a decade’s worth of invaluable experience as head coach of the varsity Laurentian Voyageurs.

🐺Welcome to the Pack Craig! 🏒
Wolves are pleased to announce the hiring of Craig Duncanson as Head Coach. He will be joined by Associate Coaches, Zack Stortini and Darryl Moxam behind the bench.
📰: https://t.co/SMFpGg6BmI#GameON | #ReadyToRun🐾 pic.twitter.com/hApREIAknV

Tri-City Americans: After assuming partial ownership of the franchise in 2005, Stu Barnes steps behind the Americans bench for the coming season in a return to the coaching ranks since last serving as an assistant with the Dallas Stars in 2019. The move sees the 50-year-old return to his roots as Barnes skated three years with New Westminster/Tri-City from 1987-90, highlighted by Rookie and Player of the Year honours in his first and second seasons, respectively.

Val-d’Or Foreurs: After helping the Victoriaville Tigres win it all in an associate coaching capacity last season, 37-year-old Maxime Desruisseaux gets his shot as a first-year head coach of the Foreurs. Part of the coaching staff in Victoriaville since 2012, the former rearguard previously played four seasons as part of Moncton, Rimouski, and Victoriaville from 2001-05.

Windsor Spitfires: As a first-time head coach of the Spitfires, Marc Savard brings with him no shortage of accolades that begins with a four-year playing career with the Oshawa Generals from 1993-97 in which he twice won the league scoring title, while today he remains the franchise’s all-time leading scorer with 413 points in 238 career games. The 44-year-old then went on to a successful NHL career that included a Stanley Cup championship with the Boston Bruins in 2011, while he most recently served as an assistant coach with the St. Louis Blues in 2019-20.