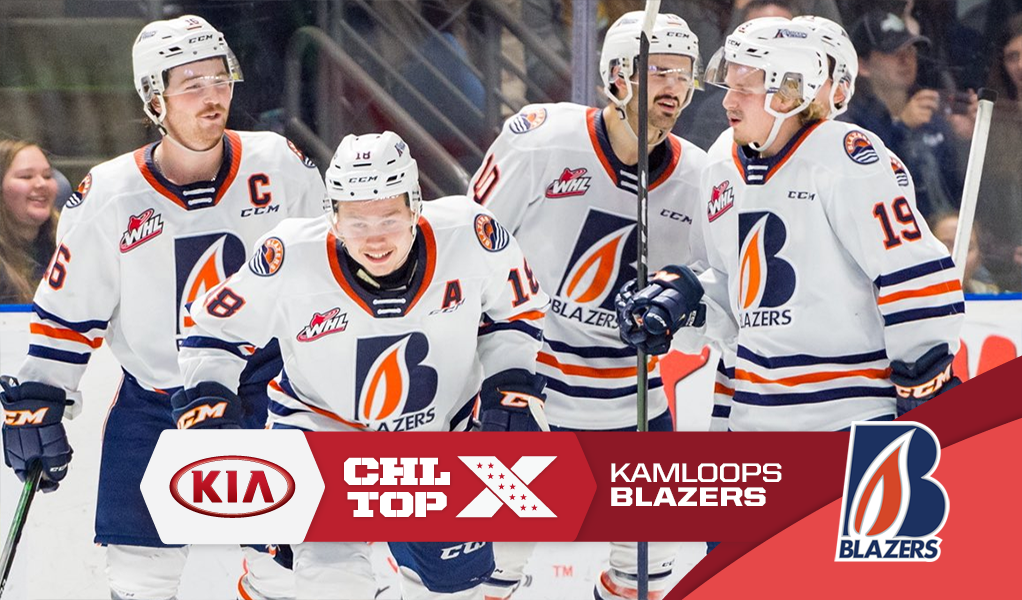 The red-hot Kamloops Blazers have soared to No. 7 in the latest Kia CHL Top-10 Rankings.

Winners of five straight, including the past week’s victories over the Spokane Chiefs and a pair versus the rival Kelowna Rockets, the Blazers have climbed to first place in the B.C. Division with a 27-11-2-1 showing, good for 57 points.

Leading the way for the Blazers this season is veteran right-wing Zane Franklin whose 66 points counting 24 goals and 42 assists sit tied for first in scoring across the Western Hockey League. Among his recent performances, Franklin put up a one goal plus a trio of assists to match his season high of four points in a 6-3 road victory versus the Chiefs that saw him earn second-star recognition.

There is also plenty of secondary scoring support with the Blazers – only one club has outpaced Kamloops’ 166 markers on the season – headlined by returning left-wing Orrin Centazzo who has posted 58 points across 41 appearances followed by budding centre and 2020 NHL Draft hopeful Connor Zary who has impressed with 53 points through 37 contests this season. Rounding out the group is talented first-year forward Logan Stankoven, the fifth-overall pick from the 2019 WHL Bantam Draft who has made an early impression in netting 26 points counting 16 goals and 10 assists through his first 37 appearances.

“It’s been fun being on top of the division and fighting for top of the (Western) Conference,” Zary told the Canadian Hockey League. “We have a lot of good players this year and a really good coaching staff. Everything is just kind of falling into place and it has been great.

“We are really jelling as a team. We have had some moments in the season where it has really brought us together. We are buying into everything that is going on and all of us know that we are really good players. It has been unbelievable the last few weeks.”

Dominant on the special teams, only two teams have found more success on the man advantage than Kamloops’ 24.4% rate of efficiency, while no one plays it tighter when short as the Blazers have killed more than 88% of their infractions this season.

For Zary, he is one of the team’s most dangerous weapons on the man advantage as the first half of the season has seen him collect nine power-play markers plus 14 helpers, helping him be a consistent presence atop the WHL scoring race and a legitimate contender to claim the Bob Clarke Trophy.

“I know points can get to you sometimes so I am not trying to focus on it too much,” Zary detailed. “I think just being up there (in the scoring race) is something I take pride in. I am skilled player and I know I should be producing points with my linemates. I know they are up there too and it has been really good so far. I have had a fun season.”

On the back end, Kamloops’ success continues where a strong defensive core is headlined by veteran rearguard Max Martin, a steady two-way defender who has rounded our his offensive acumen this season in registering 39 points through as many appearances. That was no better evident than earlier this year when Martin matched a career high after putting up four assists in a 10-1 thumping of the Seattle Thunderbirds that saw him honoured as the game’s third star.

Also on the back end is Tampa Bay Lightning draft pick Quinn Schmiemann, another solid puck-moving defender who is on pace for a career-best performance in the offensive zone, and the newly acquired Libor Zabransky who captained Team Czech Republic at the World Junior Championship.

Rounding out the Blazers and the critical cog to any team’s success is netminder Dylan Garand, another 2020 NHL Draft prospect who has seen plenty of crease time this season in suiting up for all but seven of the Blazers’ contests, helping him pick up a league-leading 23 wins through the first half of 2019-20.

Surrendering a lone regulation loss through his last 13 appearances, that stretch included Garand’s second shutout of the season and third of his career in a late December victory over the Rockets in which he turned aside 25 shots in a 4-0 road win versus the rival club.

“He’s been unreal for us. If you had one MVP, he’d be up there,” Zary concluded. “He’s been great for us. It’s tough coming in, 17-year-old goalies, but he’s been unreal. We’re all behind him and we feel so comfortable playing in front of him so it’s easy.”

The Blazers now look to continue their hot streak in hosting a pair of back-to-back showings against the Tri-City Americans before closing out their three-game weekend on the road versus the Vancouver Giants.