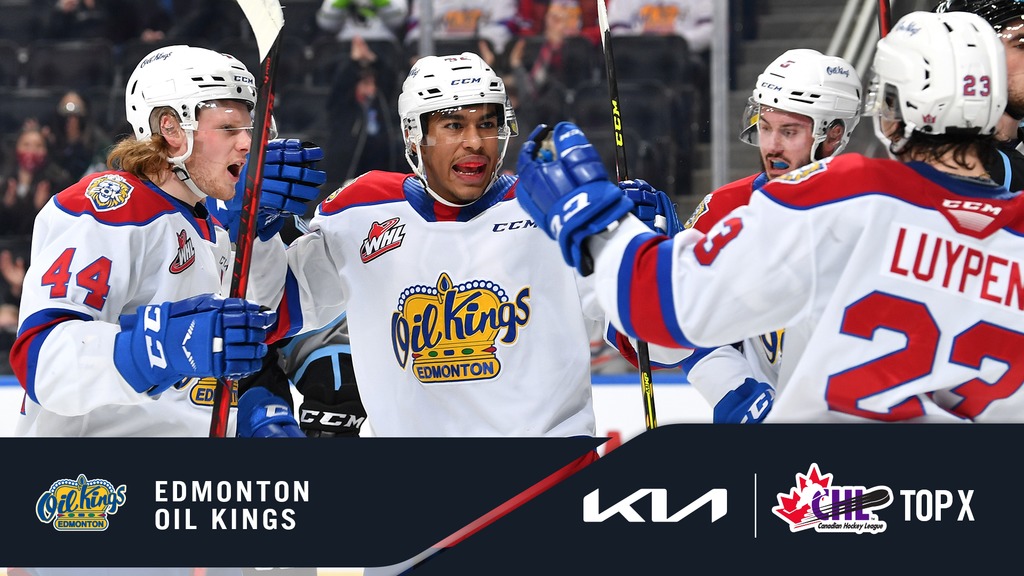 The Edmonton Oil Kings reign supreme. Closing out the weekend with a pair of victories in which the squad combined for 15 goals, the Oil Kings have climbed to top spot in the Kia CHL Top-10 Rankings for the third time this season. Highlighting the accomplishment for Edmonton was Monday’s 6-3 triumph over Winnipeg in which overage right-wing Josh Williams and Florida Panthers prospect Justin Sourdif led the way, each wrapping up the contest with two tallies. Joining Edmonton last month, Sourdif has found immediate success in his new home, already with 16 points to his name through 12 contests.

Climbing to No. 2 in the national rankings, the Everett Silvertips picked up five of six points on the week to remain undefeated in regulation in their past 13 outings. Standing atop the WHL with a 35-7-2-5 showing and 77 points, the Silvertips bring a well-balanced offensive attack that makes the squad a dangerous opponent on each shift. On the season, four Silvertips skaters have already reached the 50-point plateau, headlined by overage centre Alex Swetlikoff who has collected 58 points in 49 games.

Following a dominant 12-week run atop the Kia CHL Top-10 Rankings, the Winnipeg ICE clock in third following a hard-battled week that saw the club find the win column once in three outings. Among the top performers for Winnipeg on the week was rookie centre Zachary Benson who notched three goals and one assist, bringing him to 41 points on the season, good for seventh in team scoring. On the season, the ICE remain a force, sitting second in the WHL’s Western Conference with a record of 32-8-2-1 and 67 points.

At No. 7, the Portland Winterhawks won two of three contests on the week highlighted by a 9-1 triumph over rival Spokane that saw defenceman Clay Hanus lead the way with a three-point night. Closing out his WHL career in style, the 2021-22 campaign has seen the overage rearguard reach new offensive heights as he has collected 50 points through as many games, second most among all WHL defencemen. The Winterhawks will look to keep up their winning ways when they open a three-game road trip Friday in Prince George.

Picking up five of eight points, the Kamloops Blazers closed out the week on a high note in coming away with a 4-3 shootout victory over WHL-leading Everett that saw 2002-born left-wing Daylan Kuefler play the hero with a two-goal performance, including the game-tying tally coming with just 43 seconds remaining in the final frame. On the season, the Blazers have a solid lead atop the WHL’s B.C. Division with a record of 35-13-2-0 and 72 points. The club returns to the ice Friday against rival Kelowna.

In the honourable mention category, the Seattle Thunderbirds added two more wins on the weekend to make it seven-straight victories for the squad, highlighted by a 5-1 road win over No. 7 ranked Portland where 2022 NHL Draft eligible defenceman Kevin Korchinski led the way with a three-point night.

Headlining the QMJHL, the No. 4 ranked Charlottetown Islanders had a successful weekend in securing three of four points underscored by a dominant 7-2 win over Victoriaville that saw six different skaters finish with multi-point nights headlined by blue-liner Lukas Cormier, a 2020 third-round selection of the Vegas Golden Knights and the reigning QMJHL Defenceman of the Year who put up two goals and two assists en route to the victory. On the season, Cormier sits second among all league defencemen with 47 points in 32 games.

Climbing to sixth nationally, the Shawinigan Cataractes added three victories on the week to make it nine straight. Facing Val-d’Or on Sunday, the Cataractes came away with an 8-2 decision thanks in part to a four-point night by Dallas Stars 2020 first-round selection Mavrik Bourque who shined with a two-goal, two-assist effort, while 17-year-old defender Isaac Menard put up his second-straight multi-point game to give him seven points over two contests. The Cataractes stand atop the QMJHL’s Western Conference with a record of 26-9-1-2 and 55 points.

Earning honourable mention, the Acadie-Bathurst Titan pieced together three-straight victories on the week that now sees the club undefeated in regulation in its past eight outings. On Monday, the Titan topped No. 4 ranked Charlottetown in extra time in a 5-4 final that saw overage right-wing and league-leading scorer Felix Lafrance play the overtime hero.

Claiming national recognition for the third-straight week, the No. 5 ranked Hamilton Bulldogs are winners of four straight, including a decisive 8-2 victory over Kingston that saw the club rally for five goals in the final frame. Leading the way to the win for the Bulldogs was 2002-born centre Logan Morrison who wrapped up the contest with one goal and three assists. In all, through 38 appearances this season, Morrison stands at 20 goals and 45 assists, production outpaced by just seven players league wide.

Coming in at No. 9, the Kingston Frontenacs picked up four points on the week following a pair of victories over Ottawa. Among the top performers for the club was overage right-wing Lucas Edmonds who closed out the week with three goals and five assists in the three contests. Sitting fourth in the OHL’s Eastern Conference with a 28-13-3-0 showing and 59 points, the Frontenacs will look to once again find the win column when they face off Friday versus Oshawa with puck drop set for 7 p.m. Eastern on TSN.

At No. 10, the red hot Flint Firebirds collected six of eight points on the week, making it nine-straight games without a regulation loss. Facing rival Sarnia on Monday, the Firebirds came away with a 7-3 road victory in which overage left-wing Ethan Keppen pushed the pace with a two-goal performance, in what marked the beginning of a three-game set between the two clubs. In all, the Firebirds’ impressive streak has seen the club climb to top spot in the OHL’s Western Conference with a record of 29-14-1-3 and 62 points.

In the honourable mention category, the North Bay Battalion are beginning to earn time in the national spotlight after winning nine consecutive games, with the past week counting wins over Peterborough and Ottawa. The Battalion will look to make it 10-straight wins when they take to the ice Thursday in Niagara.