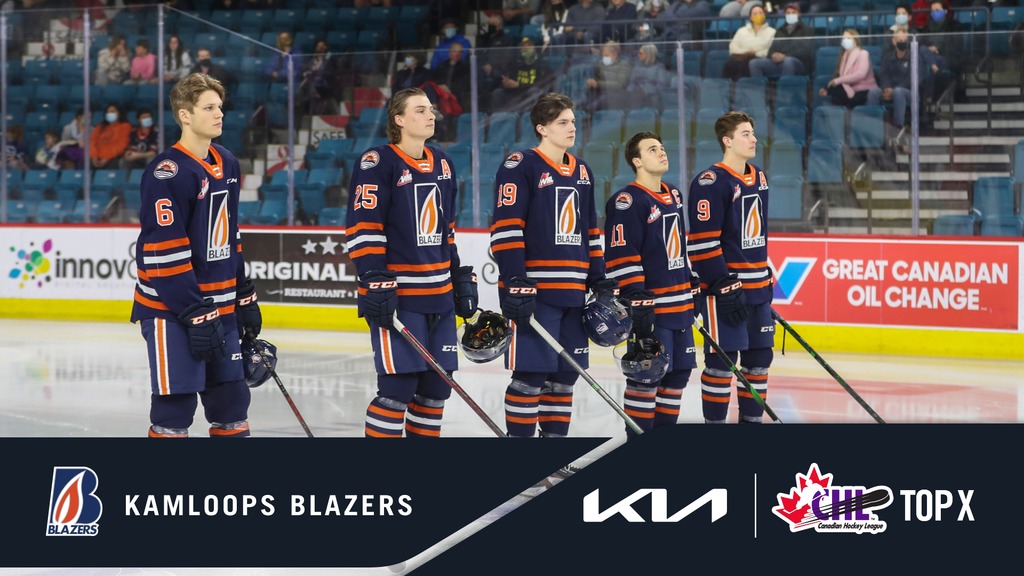 The Winnipeg ICE are unbreakable. As the 2021-22 campaign enters December, the Manitoba capital club has surrendered a lone regulation loss through 23 appearances, backed by offensive riches that have seen the ICE outpace the opposition by an astounding plus-81 margin. Bringing plenty of scoring touch in the form of 2022 NHL Draft favourites like Matthew Savoie and Conor Geekie – the latter leads the WHL with 39 points and is one of six ICE skaters among the top eight in league-wide scoring – Winnipeg often proves to be too much for the opposition to handle, best evidenced by 10 showings this season in which the ICE have found the back of the net six or more times, including a pair of contests in which they reached double digits.

Among a quartet of WHL clubs headlining the latest Kia CHL Top-10 Rankings, clocking in behind the ICE is the B.C. Division leading Kamloops Blazers who enter the third month of regular-season action riding a six-game winning streak. Home to some of the most intriguing future NHL talent like co-captain Logan Stankoven (Dallas Stars) and netminder Dylan Garand (New York Rangers), the Blazers bring top-tier talent throughout their lineup. Elsewhere, the always defensively sound Everett Silvertips have put together an incredible start to the season, lasting 19 games before dropping their first regulation loss in a hard-battled 3-2 showdown versus the Blazers. In all, the Silvertips have allowed a league-low 36 goals on the season, where a dynamic duo between the pipes in Braden Holt and Koen MacInnes appear poised to follow in the footsteps of past Everett netminding greats. Rounding out recognition from the WHL is the Edmonton Oil Kings who bring a well-balanced attack underscored by top-flight talents throughout their lineup. That group is headlined by Arizona Coyotes first-round pick Dylan Guenther whose transition from the wing to the middle of the ice has added another weapon to his offensive arsenal, while in the blue paint hulking goaltender and Detroit Red Wings draftee Sebastian Cossa who alongside Garand should expect to star for Canada at the upcoming World Juniors.

Leading the way in the OHL is the London Knights, winners of 15 of 20 contests this season. Witnessing the next step in an offensive breakout from Nashville Predators draftee Luke Evangelista – who registered just two points as a rookie, neared point-per-game production as a sophomore, and now with 33 points through 18 games this season – the talented forward is a consistent threat to find the scoresheet, having done so in all but one game in 2021-22, while his overall production has been outpaced by only four players league-wide.

One of three OHL clubs in the Week 9 rendition of the Kia CHL Top-10 Rankings, also earning recognition is the eighth-place North Bay Battalion, leaders of the pack in the OHL Eastern Conference with an impressive 13-7-1-1 showing. Introducing new roster additions like budding left-wing Matvey Petrov (Edmonton Oilers) and 2022 NHL Draft eligible defenceman Ty Nelson, the pair have provided exciting early returns to the Battalion after hearing their names called first overall in the 2020 CHL Import and 2020 OHL Priority drafts, respectively, while rounding out the North Bay brigade is San Jose Sharks up-and-comer and OHL leading scorer Brandon Coe who in his swan song season in the junior ranks has 39 points in 22 games. Lastly, coming in at No. 10, the upstart Hamilton Bulldogs enter December on a high note, having picked up nine points in their past five outings. Bringing no shortage of offensive options, the Bulldogs’ scoring core is led by Czech-born centre and Montreal Canadiens prospect Jan Mysak, who after joining the club midway through the 2019-20 campaign has continued to impress in his second season, to the tune of a team-leading 28 points in 19 games. The coming weeks could also see the Bulldogs continue to add scoring options to their lineup with the eventual return of injured centre and Seattle Kraken draftee Ryan Winterton. Meanwhile, beyond the Bulldogs, a pair of OHL clubs also earned honourable mention in the Week 9 rankings: the Kingston Frontenacs, home to 2022 NHL Draft headliner Shane Wright whose 22 points in 19 games has helped power the club to a 11-5-3-0 start, as well as the surging Guelph Storm who have come away with the victory in four of their past five outings.

From the QMJHL, the Charlottetown Islanders continue to make waves and stand atop their conference with 31 points in 22 games. Backed by overage centre and Montreal Canadiens draftee Xavier Simoneau, who sits second in league scoring and a lone point back of top spot, Charlottetown continues to follow up on last year’s dominant performance. Chief among the key returnees from the previous rendition is gifted rearguard Lukas Cormier, the reigning QMJHL Defenceman of the Year who continues to generate plenty of offensive opportunities from the back end, where his 30 points through 22 games on the season sit second among all defencemen league-wide.

Elsewhere, the Gatineau Olympiques have rediscovered their winning ways in recent weeks in coming away with four consecutive victories. Receiving offensive contributions throughout the lineup, the Olympiques are loaded with scoring depth as shown by seven skaters with a dozen or more points on the season. At the top is 2022 NHL Draft prospect Antonin Verreault, a diminutive left-wing who broke in with the club a year ago where he approached point-per-game production, while he has now continued to do so as a sophomore. Among 2022 NHL Draft talent to watch on the Olympiques also includes offensive-minded rearguard Tristan Luneau, with many in the scouting community expecting the budding blue-liner to hear his name called in the opening round. Lastly, the No. 9 ranked Sherbrooke Phoenix continue to make noise, earning honours for the fifth time this season thanks in part to the impressive performance witnessed from Canadiens up-and-comer Joshua Roy, the first-overall selection from the 2019 QMJHL Entry Draft who has lived up to that billing by producing a league-leading 39 points in just his third season in the junior ranks. Closing out November with seven goals and 13 assists through 10 appearances, Roy will look to continue that prolific production when he and his Phoenix teammates next take to the ice Thursday against Quebec, with game action set for 7 p.m. local time and available via CHL TV. Earning honourable mention in Week 9, the Quebec Remparts have rebounded in recent weeks, winning six of their past 10 games while continuing to see strong offensive performances from a handful of players, including Theo Rochette, Zachary Bolduc (St. Louis Blues), James Malatesta (Columbus Blue Jackets), and expected 2022 NHL Draft first-round pick Nathan Gaucher. 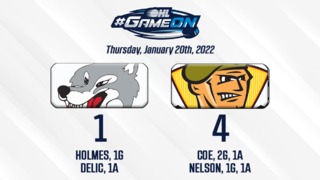