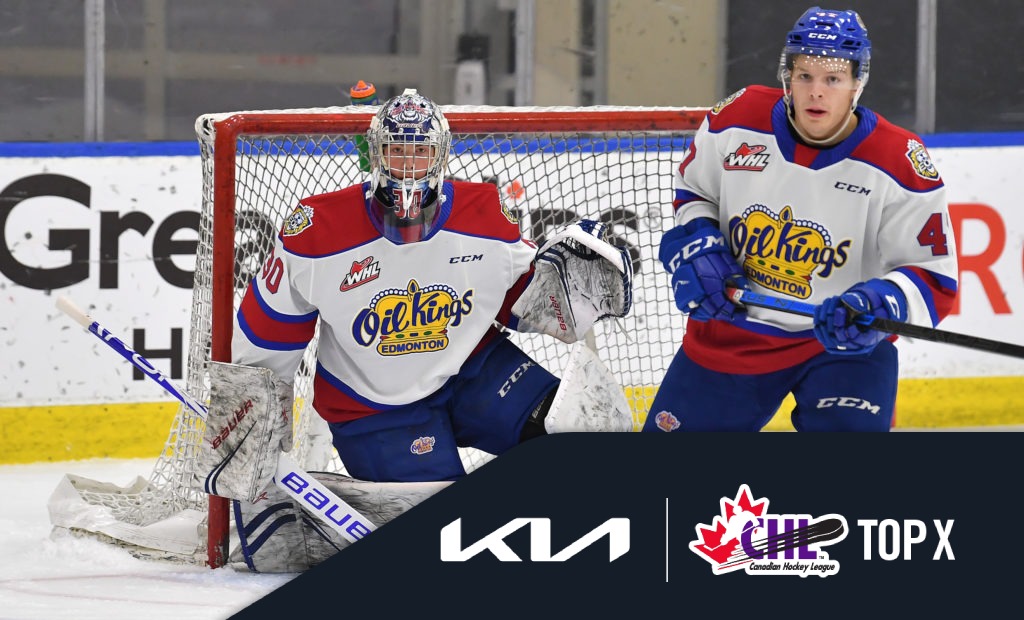 The Canadian Hockey League announced today the preseason edition of the Kia CHL Top-10 Rankings for the 2021-22 season.

The rankings were selected with input from NHL Central Scouting and come prior to the 2021-22 season opening Thursday as the defending President Cup champion Victoriaville Tigres host the Shawinigan Cataractes. The WHL opens its season Friday while the OHL begins play October 7. Rankings of the CHL’s Top-10 teams will resume on a weekly basis.

Headlined by first-round NHL talents like Dylan Guenther (Arizona Coyotes), Jake Neighbours (St. Louis Blues), and Sebastian Cossa (Detroit Red Wings), the Oil Kings look to be a dominant force in the west that can score at will while holding back the opposition. At the forward ranks, no player was more productive on a point-per-game basis last season than Guenther, who netted 24 points in just 12 games before heading to the U18s, while by season’s end, Neighbours had taken command of the team scoring lead in registering 33 points in only 19 outings, good for seventh-best league-wide. Between the pipes, Cossa was near perfect, surrendering just one regulation loss in his 19 appearances while leading the WHL with a 1.57 goals-against average and .941 save percentage.

Bringing a well-balanced attack that is highlighted by NHL-bound talents like James Malatesta (Columbus Blue Jackets), Viljami Marjala (Buffalo Sabres), new addition Zachary Bolduc (St. Louis Blues), plus 2022 NHL Draft hopeful Nathan Gaucher, there is no shortage of offensive creativity when it comes to the Remparts. That then continues on the back end with Florida Panthers prospect Evan Nause as well as big-time blue-liner Louis Crevier who took a step offensively last season with Chicoutimi. Quebec is also solid in goal where highly touted netminder William Rousseau will continue to make a name for himself as he splits duties with the incoming Fabio Iacobo who won it all last season with Victoriaville in an understudy role.

Chosen to host the 2022 Memorial Cup presented by Kia, the Sea Dogs have their ticket punched to the year-end celebration but that doesn’t mean the club won’t aim to put itself in the best position ahead of time. Bringing a revamped roster and high expectations, the Sea Dogs are headlined by Calgary Flames prospect Ryan Francis, a late-season addition to the squad a year ago who following his arrival netted 29 points in 17 games to ultimately finish top spot in team scoring. For Saint John, much of its offense starts at the back end where NHL draftees William Villeneuve (Toronto Maple Leafs) and Jeremie Poirier (Calgary Flames) are both amongst the league’s best. The duo finished one and two, respectively, in defencemen scoring in 2019-20. Added from Val-d’Or, overage netminder Jonathan Lemieux rounds out the group.

It’s the next season of the Shane Wright Show in the Limestone City where the 2022 NHL Draft favourite will look to build on his dazzling freshman showing in which he challenged the rookie paces put up by Connor McDavid and John Tavares.

Bringing one of the best blue-liners in the business in Los Angeles Kings up-and-comer Brandt Clarke, the Colts are set to ice a veteran heavy lineup that beyond Clarke includes many other future NHL hopefuls like returning top scorer and Philadelphia Flyers prospect Tyson Foerster.

A new era begins for the Oregon club, and Portland’s performance in the preseason looks to have been a sign of what is to come with it winning all four of its contests while outscoring the opposition by 14 – and that’s with star forward Seth Jarvis still away from the club in attending training camp with the Carolina Hurricanes.

Depth and experience will lead the way for the Titan who will ice a lineup that includes a forward collection counting four NHL drafted talents underscored by offseason addition Hendrix Lapierre, a Washington Capitals hopeful who oozes offensive expertise.

Don’t let the Spitfires fly under the radar as the dark horse club is backed by a veteran savvy lineup that includes plenty of scoring options like power forward Will Cuylle (New York Rangers) and newly signed Dallas Stars up-and-coming centre Wyatt Johnston.

The Cataractes will be no easy out for the opposition in bringing a lineup with a knack for scoring in bunches. Lining up for Shawinigan this season includes plenty of star power highlighted by Mavrik Bourque (Dallas Stars), Xavier Bourgault (Edmonton Oilers), and returning top scorer Olivier Nadeau (Buffalo Sabres).

All eyes will be on Winnipeg this season as the squad includes a pair of centres in Matthew Savoie and Conor Geekie, both of whom are early projections to be taken in the first round of the 2022 NHL Draft.

The always competitive club is again an early favourite to make noise in the OHL as NHL draftees Luke Evangelista (Nashville Predators) and Antonio Stranges (Dallas Stars) look to make the next step, while record-setting Brett Brochu brings plenty of intrigue in goal.

Finishing atop the QMJHL a year ago, the Islanders will look to their crop of young talent to take on advanced roles following some key graduations, particularly between the pipes where 18-year-old Jacob Goobie is set to assume the starter duties.

After capturing the WHL’s East Division crown a year ago, the Wheat Kings will return a refreshed lineup led by Ottawa Senators prospect Ridly Greig who finished second in team scoring last season with 32 points in 21 games.