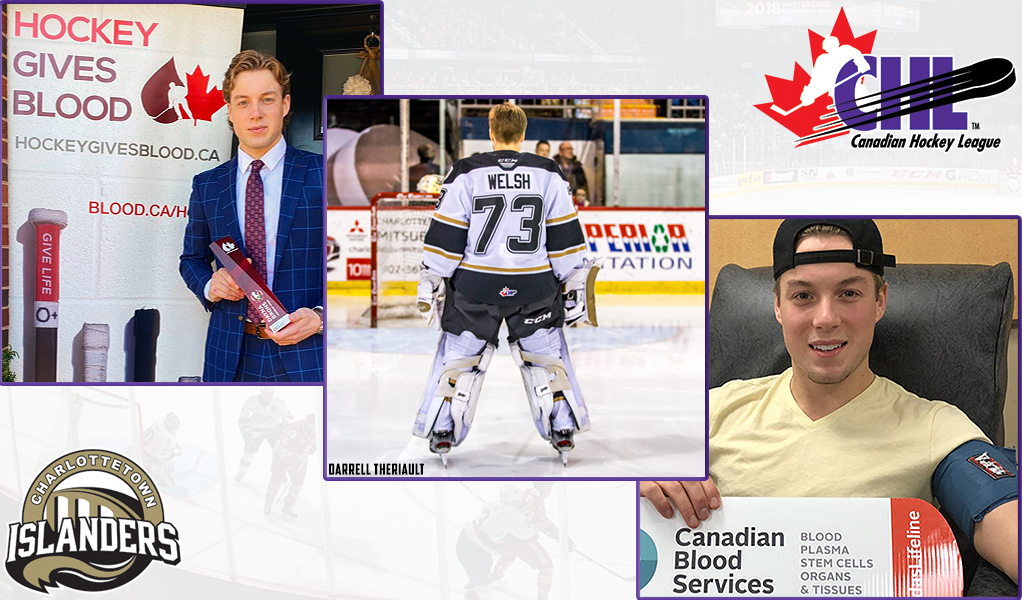 Matthew Welsh may be graduating from the Canadian Hockey League but he’s leaving behind quite the legacy on and off the ice.

On May 6, the 20-year-old goaltender who set a QMJHL record for most minutes played during his fifth and final season with the Charlottetown Islanders, received the Dayna Brons Honorary Award from Hockey Gives Blood in partnership with Canadian Blood Services at his Halifax, Nova Scotia, home.

The award recognizes an individual from Canada’s hockey community who exhibits outstanding dedication towards patients who rely on blood and stem cell products in Canada. This person must be deemed to have made a significantly positive impact regarding the awareness and necessity of Canada’s Lifeline.

It’s namesake, Dayna Brons, was the Humboldt Broncos’ athletic therapist who died from injuries sustained in the team’s 2018 bus crash that killed 16 people. She was a frequent blood donor and received transfusions after the crash before dying five days later.

Proud to announce @mwelsh73 of the @IslandersHKY as the 2020 recipient of the Dayna Brons Honorary Award.

Matt’s commitment to support @CanadasLifeline admirably represents his fellow Player Ambassadors with the class & professionalism they are all known for. @QMJHL @CHLHockey pic.twitter.com/k0J0R5Wi8Q

“To help carry out Dayna’s legacy … it’s an honour,” Welsh told Postmedia’s Kevin Mitchell. “She had a lot of character. A lot of integrity and pride. And to be associated with this award is really an honour.”

Welsh became a Hockey Gives Blood Player Ambassador beginning in November, 2019, and got to work right away. Throughout the season he donated blood twice, encouraged a team blood donation event, helped promote the #stemcell registry, posted multiple times on social media, and rallied the Islanders and the Charlottetown community to win the ‘blood drive challenge’ between fellow QMJHL teams and clinics in Saint John Sea and Moncton.

These efforts were characteristic of Welsh throughout his CHL tenure which began as 16-year-old chosen in the second round of the 2015 QMJHL Entry Draft. His selflessness, compassion, and dedication of his personal time made him one of the team’s most popular players ever and one that will be remembered for far more than his 13,080 minutes between-the-pipes.

As a @hkygivesblood player ambassador, I’m extremely humbled to be accepting this years Dayna Brons Honorary Award. Meeting the Brons family and learning about Dayna’s story has showed me what an amazing person she was. It’s a privilege to be able to help carry out her legacy❤️🩸 pic.twitter.com/s3FvMXCer6

The Dayna Brons Honorary Award has now been given twice, both times to a goalie, with Jacob Ingham named the inaugural recipient as a member of the Mississauga Steelheads last season. Ingham continued his role as a Hockey Gives Blood Player Ambassador this season with the Kitchener Rangers and raised more than $26,000 for the cause in his ‘Jake Saves’ campaign and earned OHL Humanitarian of the Year honours.

Hockey Gives Blood was founded in 2018 by four former hockey players, all of whom were seeking to do more for the hockey community. When the Humboldt Broncos tragedy struck they were filled with a desire to give back. Hockey Gives Blood is a work of passion for each of them.