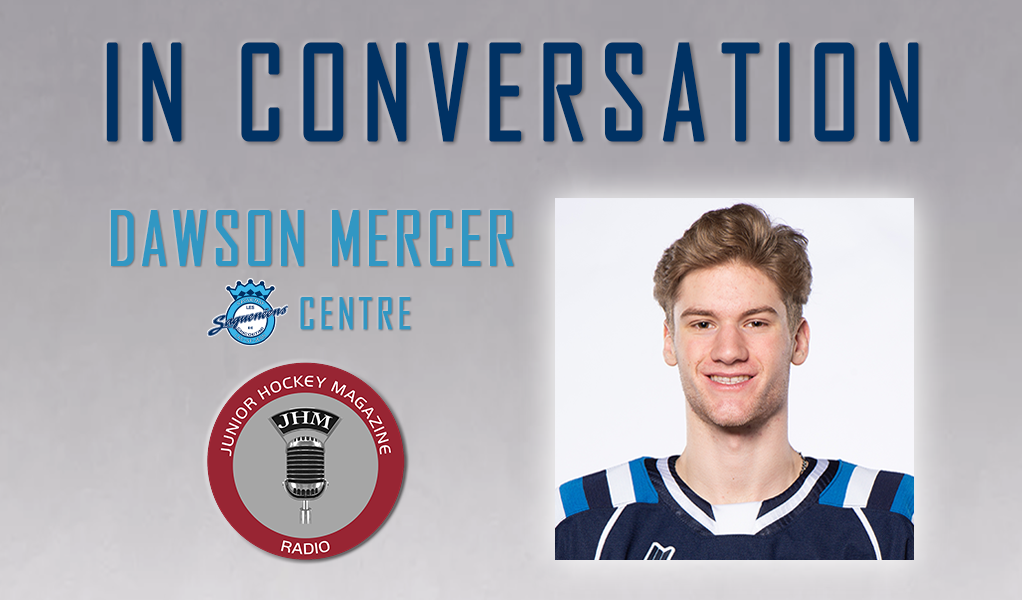 Skating in his third season in the QMJHL, the budding centre is the league’s top ranked player behind 2020 NHL Draft favourite Alexis Lafreniere, and with the numbers to back it up. After finishing just shy of a point-per-game pace a year ago in tallying 30 goals and 34 assists through 68 appearances, Mercer continued to develop his game this season, recording 60 points in only 42 games split between the Drummondville Voltigeurs and Chicoutimi Sagueneens. Meanwhile, this season also saw Mercer succeed on the international stage as the Bay Roberts, N.L., native was a part of the Team Canada squad that captured its 18th gold medal at the 2020 World Juniors.

Mercer recently chatted with Junior Hockey Magazine about his experience playing under the national spotlight, his overall success this season, and how he is preparing for the upcoming NHL Draft:

Junior Hockey Magazine: What is it like right now for you and your teammates where all of a sudden you go from surrounded by your buddies, fans, and you’re so busy at school and on the ice, and then all of the sudden everything just shuts down? What was that transition like for you?

Dawson Mercer: It almost comes as a shock to you. We’re a bunch of young adults right now trying to live our dream of becoming hockey players and all of a sudden this comes to a halt and they say no more so it is a bit of a shocking feeling of not being allowed to step on the ice but you can put in the work in the gym to get ready and prepare. It has been a crazy year in coming back to Drummondville after a summer of training, then with Canada at the CIBC Canada/Russia Series and then the World Juniors and then getting traded and now the season ending, it has been a wild rollercoaster.

JHM: You were hurt when the season shut down which put you in a different category because you can’t just go home and play video games – you have to try to rehab yourself. Where are you at injury wise and how are you going to be handling that going forward?

JHM: You’re the No. 2 rated player from the QMJHL – only Alexis Lafreniere is ahead of you. How much does that mean to you to see that your efforts are being recognized like this?

DM: He is an unbelievable player and then being right behind him, trying to live out our dreams of playing in the NHL one day, having that recognition feels good and it provides positive feedback. I don’t let any of that stuff affect my game. If people think highly of my game or if others don’t, I use it as motivation to keep improving my game because we all have the mindset of making the NHL. That’s the one goal that we have all had as kids and being ranked No. 2 out of the QMJHL right now is an honour in itself, just to see that all of the hard work is paying off. The draft will be one step of the way and there is a lot more work to be done in the future.

JHM: One of your goals you have already attained is a gold medal at the World Juniors, as a teammate of Alexis Lafreniere as well. What was that experience like for you?

DM: You can’t get any better. It’s world class. Hockey Canada, they do everything to the best of their ability and to have that opportunity to represent my country over there and to have my family, my teammates, and to take in the whole experience and cherish that moment forever … I don’t know how many kids get that opportunity to pursue their dream, and playing in the World Juniors, once upon a time I was looking at the TV thinking ‘Maybe I’ll be that guy one day’, and to finally be in their shoes and have a mindset that kids are saying that about you, it’s a pretty cool moment.

JHM: You were the first player from Newfoundland and Labrador in the last decade to take home World Junior gold. Have they put up your statue there yet? What kind of response have you had?

DM: When I went home, there was a lot of congratulations. I went to my old hometown hockey rink and watched my buddies play their game there and then I went to a senior game the next day to see my cousin play. They all recognized me for my accomplishments and that was pretty cool. They put up a little sign now in the rink that says, ‘The home of Dawson Mercer, World Junior Champ’, so that was a special moment.

JHM: How close do you track draft rankings and what does it mean to you, your family, and those most important in your life?

DM: You see a lot of texts, tweets, everything coming up on your phone where if you’re not seeing it first then there is someone telling you. It always finds a way to get to you but you never let it affect your game. Like I said, I use the positive stuff to motivate me and I use the negative stuff even more so that I keep progressing in my career day by day. Having all of these people talk highly of you, it is a cool feeling, and to be talking to these guys who have been around the game for a long time, they know their stuff and they know what they are talking about, so it is pretty cool to realize who you are talking to when you look on TV and they are the ones on there and hopefully one day they are the ones talking about you even more in the future.