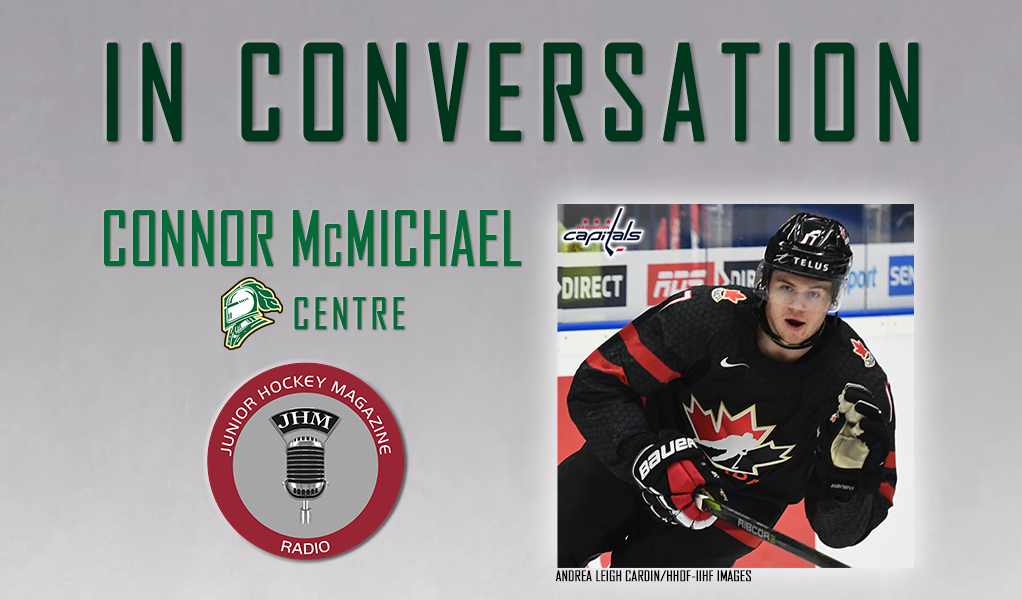 Connor McMichael is ready to shine under the national spotlight.

After dominating with the London Knights this season, the Washington Capitals first-round pick is among 22 past and present CHL stars who will suit up for the Great White North when the puck drops for the 2020 IIHF World Junior Hockey Championship in the Czech Republic on Dec. 26.

For McMichael, it marks his second opportunity to represent Canada internationally following an impressive showing with Team Canada White at the 2017 World Under-17 Hockey Challenge in which he finished tied for second in team scoring after collecting four points counting one goal and a trio of assists through six contests. McMichael’s ability to consistently find the scoresheet is also no secret to Knights head coach Dale Hunter, who has been tabbed as the bench boss for the Canadian World Junior squad.

Ahead of the annual classic, McMichael chatted with Junior Hockey Magazine about his thoughts on pre-tournament play, the opportunity to play alongside other rising stars, and how his experiences in Washington and London will help him be a key contributor with Team Canada:

Junior Hockey Magazine: Has the reality kicked in that you’re going to be a part of Team Canada?

Connor McMichael: I don’t think the reality will kick in until Boxing Day when we play the Americans. Boxing Day is such a huge tradition for World Juniors so that’s going to be really cool. For me, I’m just really excited to get going.

JHM: How would you assess the team chemistry in pre-tournament play?

CM: I think it just gets better as the days go on. We have been here for a couple of days now and the team is getting better and better with each practice. We have some really skilled players so I don’t think the chemistry will be too big of an issue for us.

JHM: You have a couple of guys coming in from the pros – Barrett Hayton and Joe Veleno. You played against Hayton in the OHL for a couple of seasons. How much does he bring to this team?

JHM: You’re second in the OHL with 59 points in just 27 games. This is your first time though playing on this kind of stage on an Olympic-sized ice surface. How much do you think the extra room could help your game?

CM: I think it’s going to help me a lot. One of my biggest attributes is my hockey sense. Just getting that extra time to think for an extra second, and I have really good speed, so when you combine those two things, I think I will benefit from it a lot.

JHM: Our director of scouting, Craig Button, said you could play adeptly in any forward roster spot with Team Canada. Where do you see yourself fitting in and what is it like to know that someone looks at you as the Swiss army knife of this team where you can go wherever they put you?

CM: It’s pretty cool. Like I said, my biggest attribute is my hockey sense so I am able to adapt to different roles. For me, I want to be a top-six guy that can be out there when the team needs a goal, but I know that may not be possible with all of the skill players we have, so for me I am looking to adapt to any role. I am excited.

JHM: You have been skating on a line with Niagara IceDogs forward Akil Thomas as well as Raphael Lavoie of the Halifax Mooseheads. How is that going so far?

CM: I think it’s going well. I know Akil really well just from playing against him a lot. He is a great player. ‘Raph’, I have never played with him or against him, but just in practicing with him I know he is a really smart player and skilled, so I am looking forward to getting going with those two guys.

JHM: Dale Hunter is Canada’s head coach. He also coaches you in the OHL with the London Knights. How much of a plus is that for you in the fact that he knows your game and trusts you out there?

CM: It’s huge. Back in London, I play in every situation whether we’re up a goal or down a goal. He trusts me in any situation so it really works well for him. Him and Mark (Hunter) and their hockey history will really help us out going into this tournament.

JHM: You were selected 25th overall by the Washington Capitals last June. You had a really solid showing at Washington’s training camp, including a highlight reel assist in a (preseason) game against the Chicago Blackhawks. What was it like to get that experience at that level?

CM: It was really cool. Looking up to some awesome players that they have in their organization like (Nicklas) Backstrom, (Evgeny) Kuznetsov, (John) Carlson, and obviously (Alex) Ovechkin, it was really cool just to be on the ice with those guys and it gave me a lot of confidence going back into London as well as this tournament. I learned a lot of cool things and it’s a great place to be drafted by so I am excited.

JHM: You have been watching this tournament every Christmas growing up. How special is it going to be in the Czech Republic throwing on a Team Canada jersey in the quest for gold?

CM: It’s going to be awesome. Every Boxing Day, my family and I watch the World Juniors. It’s kind of a tradition for us, so having that family experience, it’s a dream come true and I am really excited.