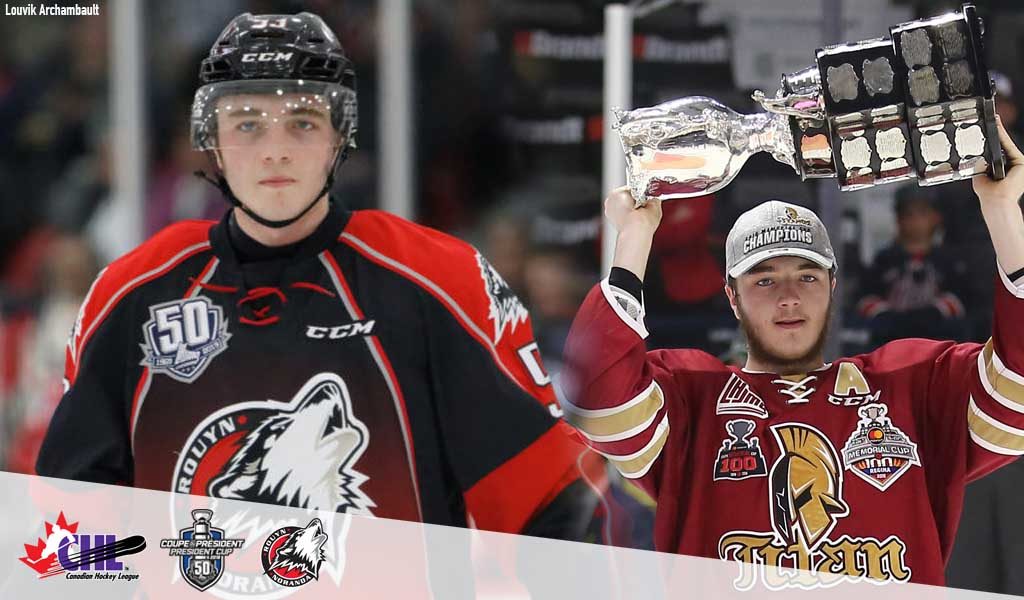 Competing in a 60-team league that encompasses four rounds of postseason play followed by a league-wide championship round, the odds of hoisting the Memorial Cup aren’t the best during a junior career that typically lasts only four years.

But that’s not the case with Dobson, who won it all last season with the Acadie-Bathurst Titan and has a chance to do so again this year with the Rouyn-Noranda Huskies.

Since the win, it’s been a hectic 12 months for Dobson, no doubt. After claiming the CHL championship with the Titan last May, the native of Summerside, P.E.I., was selected 12th overall by the New York Islanders in the NHL draft the following month, then in December joined Team Canada at the 2019 IIHF World Junior Hockey Championship, where he recorded one goal in five games.

Just days upon his return from the national stage, the rebuilding Titan then dealt their captain to the Huskies, an opportunity that ultimately allowed Dobson to elevate his game as part of a squad that has its sights set on a championship.

With the Huskies, Dobson was part of a 25-game win streak that tied a CHL record, while on a personal level he more than doubled his points-per-game proficiency as he tallied six goals and 30 assists across 28 regular-season appearances. The budding blue-liner has carried an impressive clip into the playoffs as well, putting up 20 points in 14 games to sit fourth in team scoring while leading all league rearguards by a five-point margin.

Meanwhile, the Huskies enter the QMJHL Final riding a 10-game win streak as part of a 12-2 playoff record that has seen the club sweep the Victoriaville Tigres and Rimouski Oceanic following a six-game series victory over the Shawinigan Cataractes in the opening round.

As it happens, despite the outcome of this year’s President’s Cup, Dobson and the Huskies are guaranteed a spot in the 2019 Memorial Cup presented by Kia given that their QMJHL Final opponent is the Halifax Mooseheads, the host team of this year’s CHL championship.

Still, the final round presents not only an opportunity to capture the franchise’s second league title in the past four seasons, but a last chance to gear up for the 2019 Memorial Cup presented by Kia and enter the tournament on a high note. That’s certainly the feeling in the Huskies locker room, beginning with Dobson, who won both titles last season with the Titan.

“Our main goal right now is to focus on Game 1 of the final,” the 19-year-old Dobson told the Journal Pioneer. “We want to win the Cup, and we definitely want to try to earn our way to the Memorial Cup.”

The Huskies advanced to the QMJHL Final and will compete against the Halifax Mooseheads for the President’s Cup before entering the 2019 Memorial Cup presented by Kia. The QMJHL Final begins Thursday in Rouyn-Noranda. Stay tuned for complete QMJHL playoff preview coverage.