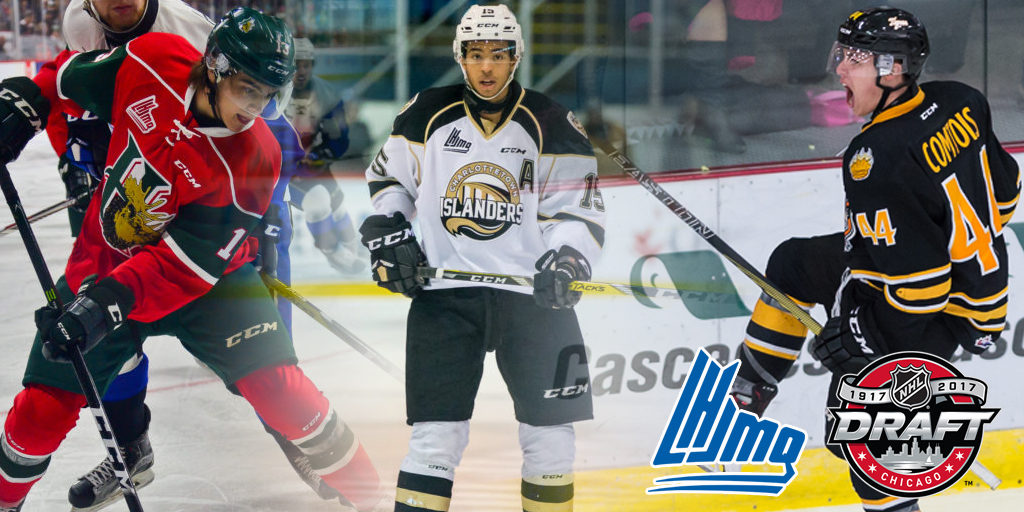 Another QMJHL product is a prime target on the NHL’s scouting radar.

Former Cape Breton Screaming Eagles forward Pierre-Luc Dubois was selected third overall by the Columbus Blue Jackets last summer, but there’s a strong likelihood that the ‘Q’ will factor into the top two later this month for the first time since Halifax’s Nathan MacKinnon went first overall in 2013.

Another Mooseheads star, Swiss standout Nico Hischier has been in a season-long battle with Brandon Wheat Kings centreman Nolan Patrick atop the NHL Central Scouting Draft Rankings, finishing second in the final list that was released in mid-April.

The New Jersey Devils hold the first overall pick on June 23rd in Chicago with the Philadelphia Flyers and Dallas Stars drawing second and third overall in the NHL’s annual draft lottery.

The NHL’s Metropolitan Division is likely to get an injection of offensive stardom as the Devils and Flyers have their pick of the litter. Hischier is poised to become the highest drafted Swiss player in NHL history, besting former Portland Winterhawk Nino Niederreiter who went fifth overall to the New York Islanders in 2010.

“I don’t know Nino personally,” Hischier recently told NHL.com’s Guillaume Lepage. “When you grow up playing hockey in Switzerland you obviously know who he is. It would be special. It would make me happy to make history, but I will take it as it comes.”

The latest in a string of tremendous European forwards to come through Halifax that also includes Nikolaj Ehlers (Winnipeg Jets) and Timo Meier (San Jose Sharks), Hischier recorded 38 goals, 48 assists and 86 points in 57 games to be named CHL Rookie of the Year.

“He manages the game like an adult, like a man,” Boucher told the New York Times. “Great vision, great poise, but he’s always in the right place defensively too, which puts him ahead of a lot of young guys. They rarely have both sides of the ice figured out, especially at that age.”

While Hischier is the big draw in the QMJHL, power forward Maxime Comtois (22-29–51) of the Victoriaville Tigres is another name worth mentioning.

A power forward in the mould of the aforementioned Dubois, Comtois was the third overall pick of the 2015 QMJHL Draft and earned an invitation to both the 2016 CIBC Canada Russia Series as well as the 2017 Sherwin-Williams CHL/NHL Top Prospects Game.

“I coached [Dubois] at the 2015 World Under-18 Junior Championship in Switzerland and can say Maxime is a new age power forward with a lot of skill and above average hockey sense,” Victoriaville head coach Louis Robitaille told NHL.com’s Mike Morreale. “[Comtois] is a guy whose office is around the net compared to Pierre-Luc, who likes to shoot the puck from the outside and crash afterwards. They are big boys who play the game the right way and they’re complete players, so that makes them special.”

Other QMJHL talents up front that have drawn NHL interest include Acadie-Bathurst Titan centreman Antoine Morand (28-46–74), Russian forwards Ivan Chekhovich (26-33–59) of the Baie-Comeau Drakkar, Pavel Koltygin (22-25–47) of the Drummondville Voltigeurs and Yaroslav Alexeyev (24-28–52) of the Sherbrooke Phoenix as well as 1999-born left-wingers Joel Teasdale (18-29–47) of the Blainville-Boisbriand Armada and Baie-Comeau’s D’Artagnan Joly (16-32–48).

A big second half propelled Indiana-born Cape Breton Screaming Eagles rookie Drake Batherson onto the radar as the 1998-born centreman was ranked 117th in North America after going unranked in the midterms. He finished the season with 22 goals, 36 assists and 58 points over 61 games.

On the blue line, athletic competitor Pierre-Olivier Joseph of the Charlottetown Islanders ranked 27th on NHL Central Scouting’s final instalment to top all ‘Q’ defenders. The younger brother and competitive rival of Tampa Bay Lightning prospect Mathieu Joseph of the Saint John Sea Dogs, Pierre-Olivier saw his stock rise over the course of the 2016-17 season, finishing with six goals, 33 assists and 39 points on the island.

Blainville-Boisbriand Armada defenceman Antoine Crete-Belzile was the only other blueliner ranked in the top-100, coming in at 76th following an injury-shortened season with the QMJHL Finalists.

In goal, a pair of former 2015 first round QMJHL Draft picks in Dereck Baribeau of the Quebec Remparts and Alex D’Orio of the Saint John Sea Dogs were ranked 10th and 13th among North American goaltenders respectively.

While it remains to be seen how many QMJHL names will be called in Chicago this month, expect to hear the first one very early as Hischier appears poised to follow in the footsteps of talented Mooseheads like MacKinnon and Drouin before him.