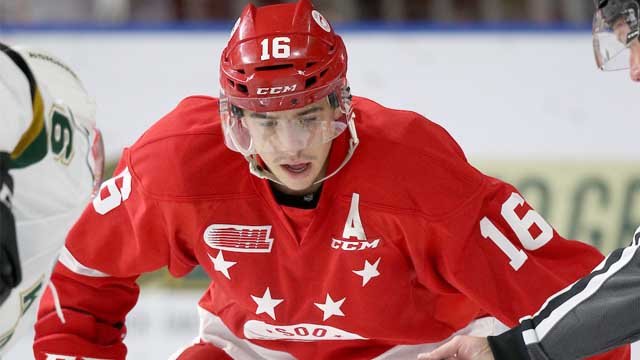 Toronto, ON – The Canadian Hockey League today announced that Philadelphia Flyers prospect Morgan Frost of the Sault Ste. Marie Greyhounds is the CHL Player of the Week for the regular season week ending January 20 after scoring seven goals and three assists for 10 points in three games with a plus-minus rating of plus-10.

Frost led the Greyhounds to three wins last week extending their winning-streak to six games extending their lead atop the OHL’s West Division standings where they carry a 30-10-4-1 record.  His weekend road trip began in North Bay on Thursday contributing an assist in a 5-1 win over the Battalion, and continued Saturday in Barrie with two goals and two assists earning second star honours in an 8-5 win over the Colts.  His week wrapped up Sunday with an impressive five-goal performance against the Wolves earning first star honours in the 7-4 victory.  The hat-trick alone set a new personal best for Frost who produced a pair of goals at even strength along with a shorthanded, power play, and empty-net marker in total to reach the 30-goal plateau for the second straight season.

A 19-year-old from Aurora, Ont., Frost is playing in his fourth season with the Greyhounds who chose him in the fourth round of the 2015 OHL Priority Selection.  He is currently third in OHL scoring with 75 points in just 38 games and leads the OHL with a 1.97 points-per-game average.  Frost represented Canada at the 2019 IIHF World Junior Championship and was a first round pick by the Flyers in the 2017 NHL Draft.