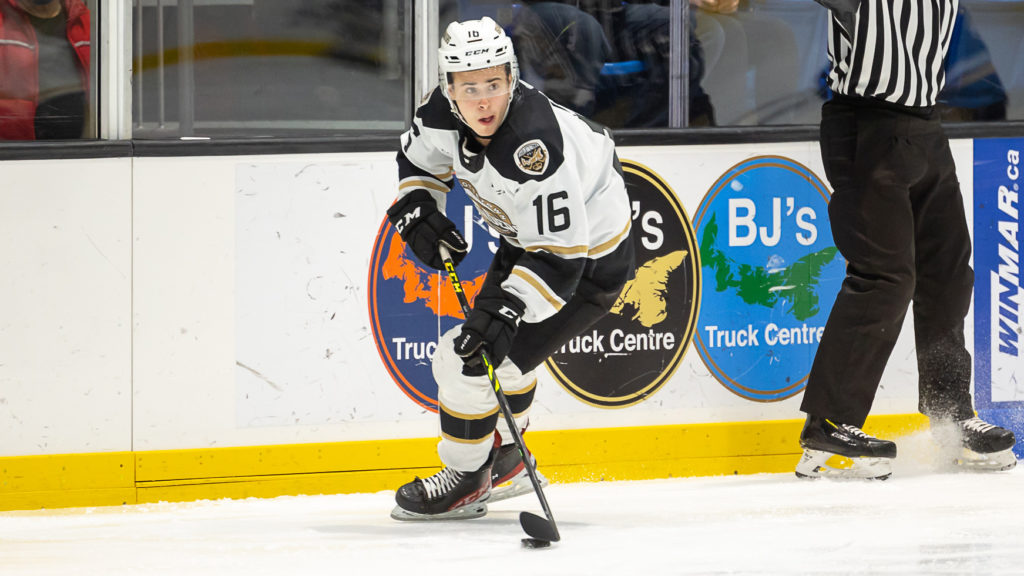 And one very excited Patrick Guay.

“It was probably the best feeling I’ve ever had in my life and my career,” Guay said after he was selected by the Vegas Golden Knights in the 2022 NHL Draft. “To hear my name, and the team had interest to draft me as a 20-year-old was a great feeling, and to this day, I’m still so excited about it.”

Guay was chosen with the 145th overall pick by the Golden Knights on July 8 on the second day of the NHL Draft. Six days earlier, he was traded to Blainville-Boisbriand from Charlottetown after an 18-month stay with the Islanders.

But make no mistake; being drafted meant the world to the 20-year-old Guay. He had been overlooked in both 2020 and 2021. But on the back of a 55-goal campaign with the Islanders, he was on everybody’s draft board in 2022.

“It meant everything,” he said of being drafted. “All of the years of hard work, the years of sadness, the two years before you don’t get drafted. It proved all of my perseverance and dedication to the game and my love for it. To be rewarded like that was great and to know that someone has trust, a team and an organization, to become one of their prospects was awesome.”

The moment was even more special as he had the opportunity to share it with his dad.

“I was at my home, on the couch, relaxing,” Guay said. “I had just finished a practice and a workout. My dad was working outside. When I heard my name I screamed to my dad and he came inside and my name was on the TV so it was a great moment to share with him.

“We really enjoyed spending that special moment together.”

And make no doubt about it, the Golden Knights are getting a special player. Alongside former Islanders teammates Jakub Brabenec and Lukas Cormier, he joins a talented prospect pool that also features CHLers such as Daniil Chayka, Zach Dean, Jakub Demek, Jordan Gustafson, Ben Hemmerling and Matyas Sapovaliv, among others.

Guay already had the chance to spend time with his future teammates, and management, last week in Vegas for the team’s development camp. It was the second time he had been to Vegas – he visited when he was eight or nine – but this time it was a business trip.

“It was excellent,” he said. “I spent a great week in Vegas. Everything was perfect. The facilities were excellent. The staff, the people, they were all very nice and very welcoming. They put everything in place to make the players feel comfortable so that we can perform on the ice.”

Guay had the opportunity to see some current Golden Knights such as William Karlsson, Keegan Kolesar, Reilly Smith and Zack Whitecloud and that alone provided motivation.

“We could see them working out. They were on a mission. It’s awesome to see guys work as hard as they did.

He may not need to look much further than potential future teammate Jonathan Marchessault for extra motivation. A former member of the Quebec Remparts, who went undrafted, he has molded himself into a top line player and is the franchise leader in games played, goals, assists and points. Leading into the NHL Draft, similarities were found between Guay and Marchessault.

“He should have been drafted last year,” TSN’s Director of Scouting Craig Button said of Guay. “Patrick has been a gifted player. All he did this year was show everybody that maybe we should have drafted you last year. He’s a shrewd, cunning, goalscorer. He’s a player that shows up at the right spots at the right times. He reminds me a little bit of Jonathan Marchessault. Patrick knows how to get open at the right time … he has high-end scoring intelligence.”

Guay will return to Vegas in September for his first NHL training camp but then the focus will shift to the Armada. Ahead of his final junior season, Guay will look to guide the Armada back to the President Cup for the first time since 2018.

“I’m really excited to join the Armada,” Guay said. “They’ve made a lot of acquisitions so I’m excited to see what’s next, next year.”

But there absolutely is a soft spot for the time he spent in Charlottetown.

“The year and a half I spent there I will cherish it and remember it forever and for the rest of my life … the organization was great. I loved every second of it.”

The Armada finished 30-29-9 last season. But general manager Pierre Cloutier has made radical adjustments this offseason; in addition to Guay, the team also traded for newly minted Memorial Cup champion Josh Lawrence who tallied 101 points last season while his 70 assists were tied for the most in the QMJHL.

“I want to develop more as a complete player,” Guay said when asked how to improve on a 55-goal campaign. “All of the little details. I had a big season last year but every little detail. Work on my skating, make the right decision every play that I can to become powerful and useful in every hockey scenario possible when I am on the ice.”