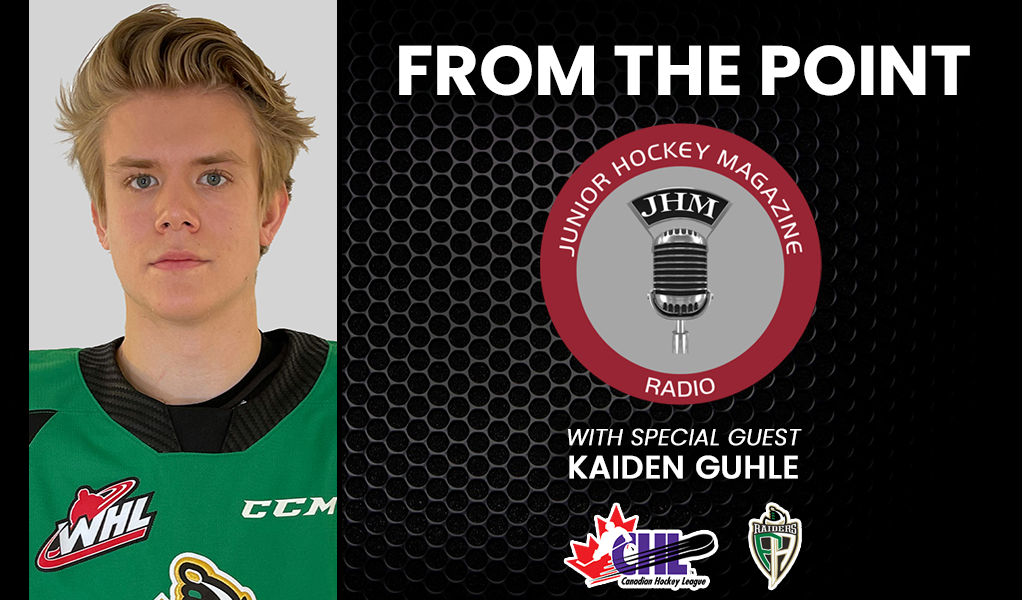 Prince Albert Raiders defenceman Kaiden Guhle joined Junior Hockey Magazine to discuss what he learned from attending training camp with the Montreal Canadiens, his excitement ahead of the upcoming World Juniors, and how he enjoys embracing a leadership role:

Junior Hockey Magazine: Tell me about your experience at training camp with the Montreal Canadiens.

Kaiden Guhle: It was a long time coming. I was excited to get down there. With COVID-19, I couldn’t get down to my first training camp so I was just excited to go there, see the facilities, and meet all the staff.

JHM: What was the experience like playing in the preseason and what is your relationship like with David Savard?

KG: It was a lot of fun. David has been around the league for a while and he knows what it takes to win. It was a surreal moment to be paired up with him and to be playing at the Bell Centre. It was a lot of fun. He was great in practice and off the ice, and all of those guys were great so I give a lot of credit to them.

JHM: How special was that moment seeing your name on the back of a Canadiens jersey?

KG: It was a dream come true. That franchise has been around forever, 24 Stanley Cups, and so much history comes with that jersey. It was just a surreal moment and something I won’t forget.

JHM: Canadiens head coach Dominique Ducharme said you’re confident in the right way, you have things to learn, and you’re just a great kid. What is it like to hear that coming from the coach who got to know you and what other conversations did you have with him?

KG: It feels good to hear that from the head coach. The biggest thing they were preaching to me was to keep it simple, to just play my game, and do what got me there. That was probably the biggest thing, and I tried to do that throughout my time there. The staff and everyone there was always great in keeping me level headed with little chats here and there to help me out.

JHM: How much are you looking forward to playing a leadership role at the World Juniors?

KG: It is exciting. Hopefully we get some fans in the stands. Even in speaking for guys who weren’t there last year, we have some unfinished business and we want to get that gold medal. It is coming up here faster than we think, so it will be exciting come Christmas time for sure.

JHM: What did you learn from last year’s experience that made you a better player?

KG: Especially in a short-term competition, I feel for us it was a bad 21 minutes that hurt us and we couldn’t really recover from that. They had a hot goalie and their team played well. The biggest thing is just a full 60 minutes means so much for any team. We let off the gas there for 21 minutes, went down 2-0, and just couldn’t recover. That was probably the biggest thing I took away from that. It is a hard tournament to win, but myself, the staff at Hockey Canada, and everyone is going to be ready for that and we are going to be ready to go come Christmas time.

JHM: What does it mean to be looked upon as a player who can lead?

KG: It’s an honour to have the ‘C’ here in Prince Albert and to even be in that conversation for the World Juniors. So many great players have gone through leadership roles in that tournament. At the end of the day, you have to do what you have to do for the team, so that is probably the biggest thing. Being a leader is part of it.

JHM: How exciting would it be to play in front of a full arena while wearing the Team Canada jersey?

KG: That would be unbelievable. I have been to a couple of Edmonton Oilers games and it gets loud, so for the World Juniors, I can’t even imagine how electric it would be in that arena. I know all of the guys would be feeding off of that. You see on TV when they have the event in Canada how crazy loud it gets in there. It’s exciting getting to hear that, and hopefully we get some fans in the stands again. It will be a dream come true for sure.

JHM: How has your game evolved since last year’s World Juniors?

KG: In playing preseason in Montreal, it gave me a little taste of the NHL, so I kind of know what that is like. I am a year older now and you get a little more confidence every year. Confidence is probably the biggest thing. Coming into that tournament a year older is huge.