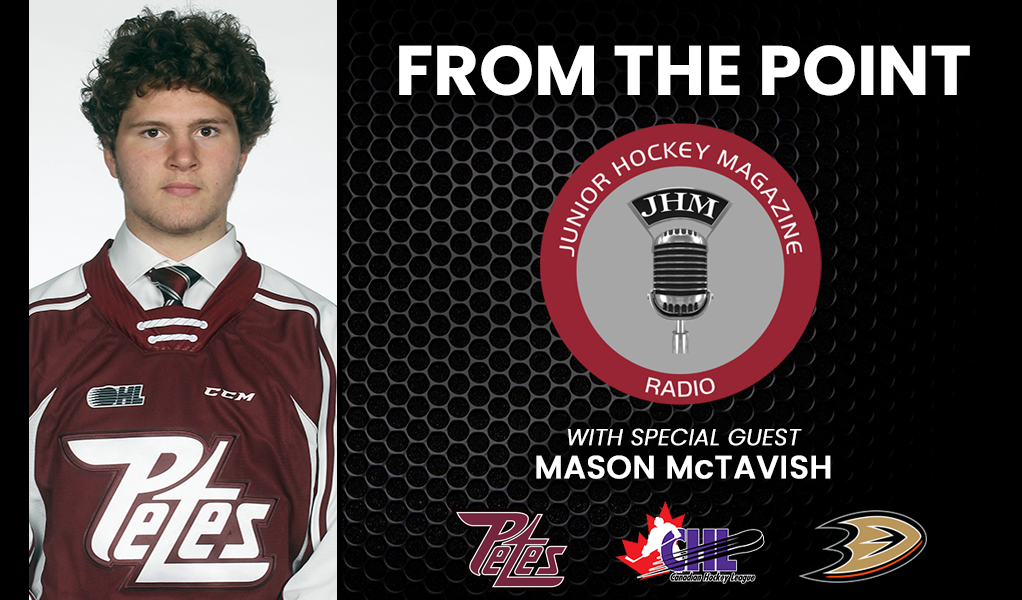 Peterborough Petes centre Mason McTavish joined Junior Hockey Magazine to discuss his invite to World Junior camp, his start to the year with the Anaheim Ducks, and a unique offseason training regimen:

Junior Hockey Magazine: What was it like to see your name on the list of invitees for Team Canada’s World Junior camp?

Mason McTavish: It was a dream of mine to even try out for this team. It started in July with the camp in the summer. Being part of that was pretty exciting. Getting the call about going to the camp again was pretty special.

JHM: What do you feel will be the intensity level of the camp?

MM: I think everybody trying out will be pretty amped up and fired up. Everyone is going to be working really hard to try to secure a spot.

JHM: How much more comfortable are you because you have had international success before?

MM: Even going back to the U17s, Hockey Canada does a good job of spreading out their players over three teams. You know everybody going into the tournament, and this is the big one. You are going to be a lot more comfortable because you know your teammates. It was a great experience winning the gold medal with the U18 team in May and hopefully I can bring some of that experience to this team.

JHM: What would it be like to put on a Team Canada jersey in front of the big crowds at the World Juniors?

MM: It has been a dream of mine. Ever since I was a kid, I watched those games with my family during Christmas. It has always been a tradition, and to maybe be a part of that is pretty cool. I am definitely excited.

JHM: What could your playing style bring to Team Canada at the World Juniors?

MM: You want to be a team that isn’t easy to play against. You want to have some tougher guys who can still play. I get it from my dad who played hockey growing up, and my brother and my mom are both super athletic. We would have some super good battles no matter what we were playing. We would always compete really hard. Nobody wanted to lose. I do whatever I can to win. Competing as hard as I can and trying to win is something I have always been really passionate about.

JHM: Is there a temptation to change your game to make a greater impression?

MM: I play my game, unless the coach is asking me to adapt to a new role. I play the way I am used to. I have never really had to change the way I play, so I am just going to keep doing what got me there.

JHM: Give us a sense of what your experience was like starting the season with the Anaheim Ducks.

MM: It was a great experience for me. I think I learned a lot of things, especially from the older guys on the team and the leaders like Ryan Getzlaf, just the way he leads the team and the way he carries himself on and off the ice. It was something I looked at a lot and I tried to pick his brain. I asked him a bunch of questions and he was really good.

JHM: Your first shot on net in the NHL was a goal. What was that like?

MM: It was a special moment for me and my family. I wasn’t sure I was going to play that game until about 4 p.m. that day. The puck squirted out to me in front of the net and I put it home. It was actually originally called off but then they looked at it again and they called it, so it was nice to have that one go in.

JHM: Give us a scouting report for those who don’t know your style of play.

MM: I am a bigger forward, a two-way guy. I like to take care of my own end and score some goals and get to the dirty areas. My biggest thing is probably my compete level. I love to go out and play hockey. It is what I am really passionate about. Hopefully I can put on the Team Canada sweater and go play throughout Christmas.

JHM: What was your offseason experience like working alongside a trainer from the Ottawa Redblacks?

MM: It was great. He does a lot with me, and a couple of other guys too. I have been working with him for the last two-and-a-half years. He has taken my game to the next level. He has been great. He takes me through a lot of workouts and mobility to get me ready for the season.