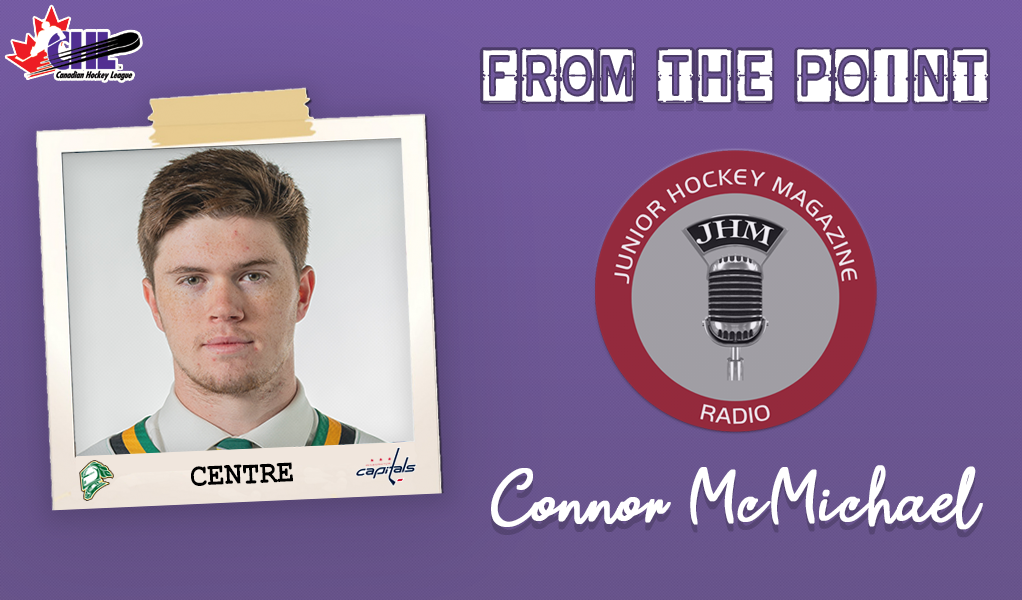 Washington Capitals first-round pick and London Knights veteran centre Connor McMichael sat down with Junior Hockey Magazine to discuss life during quarantine, what he learned from his time in the NHL bubble with the Capitals, as well as the opportunity to defend gold with Team Canada at the upcoming World Junior Championship:

Junior Hockey Magazine: How are you doing through all this?

JHM: What has your schedule been like in terms of your ability to skate and work out?

CM: At the start, it wasn’t looking too good. All of the rinks here were closed. My gym wasn’t open. So I was just doing at-home workouts, but now that things are open back up I am able to work out every day and skate five times a week. I am trying to get back on schedule. I have just been training hard trying to get back in game shape.

JHM: How important was it to have a six or seven week World Junior camp this year as opposed to just five or six days?

CM: It’s really important. All of the guys in Canada haven’t been in action except for a couple of guys in the QMJHL, so it’s been hard for guys to find ice (time) so this camp will be good to get back into game speed in the intrasquad games. We will have to take those games a lot more serious than usual and use them as almost pre-tournament games in trying to ramp ourselves up come Boxing Day.

JHM: How does it sounds to be defending a gold medal at the World Juniors?

JHM: How much can you take from the NHL’s bubble environment and that everyone was healthy?

CM: It sucks for my parents who wanted to come to the tournament and support me, especially because it is in Edmonton this year. Without fans and family, and just being in a bubble, I lived in a bubble in the summer with the NHL and they had tons of things to do to try to keep you busy. Obviously it’s not an ideal situation but you have to live with it. I just hope everyone stays safe and stays healthy and we can get rolling with the tournament with no complications.

JHM: How are you different as a player coming into these World Juniors after all that you experienced and the tremendous success you had personally at last year’s tournament?

CM: I feel that I gained a lot of stuff off the ice mentally just being around the NHL guys this summer. I also feel like I got a lot stronger because it has been a really long offseason, like four times as long as it usually is so I have been working out a lot and training. I gained a lot from when I was in the NHL bubble and have been able to catch up on strength and endurance.

JHM: Tell me about meeting Alex Ovechkin and the opportunity to learn from him.

CM: I was star struck being around him, especially behind the scenes in watching him get ready for games. Even in practice, just watching him shoot the puck, it was awesome to see. It was a dream come true being around a guy like that. I have been watching him since I was five years old when he entered the league. It’s just amazing being around him. I tried to take away as much as I could from him, and the same with guys like Nicklas Backstrom and all of the experienced guys that they have. I tried to learn as much as I could and soak it all in.

JHM: Tell me what led you to start to watch Auston Matthews videos and what did you learn from it?

CM: This year, in London I played the same spot on the powerplay as Matthews does. Obviously he had a real good goal-scoring year. He has an unreal shot and I was watching a lot of clips with our coaching staff because I am in the same spot on the powerplay. Just his curl and drag, and being from Toronto and watching him before I was in the OHL, it was cool to see him in Toronto. He’s an awesome player so I just try to soak up stuff from his shot. He has an amazing shot and he is a pretty good guy to watch.

JHM: At last year’s tournament you told teammate Ty Dellandrea, “Just get me the puck and I am going to introduce myself to the back bar.” Did that really happen? Tell me about it.

CM: That actually happened. There was a lot of nerves going into games and he and I were joking about stuff in practice just trying to call our shots. A couple practices before that, I called my shot in the shootout and it worked so I just thought I’d try loosening him up. We were playing on the same line so I thought I’d call my shot and see if it happened. Obviously it worked out so it was just a pretty funny scenario.

JHM: Where is your gold medal?

CM: It’s in my house right now. I am working on getting it framed with my jersey.