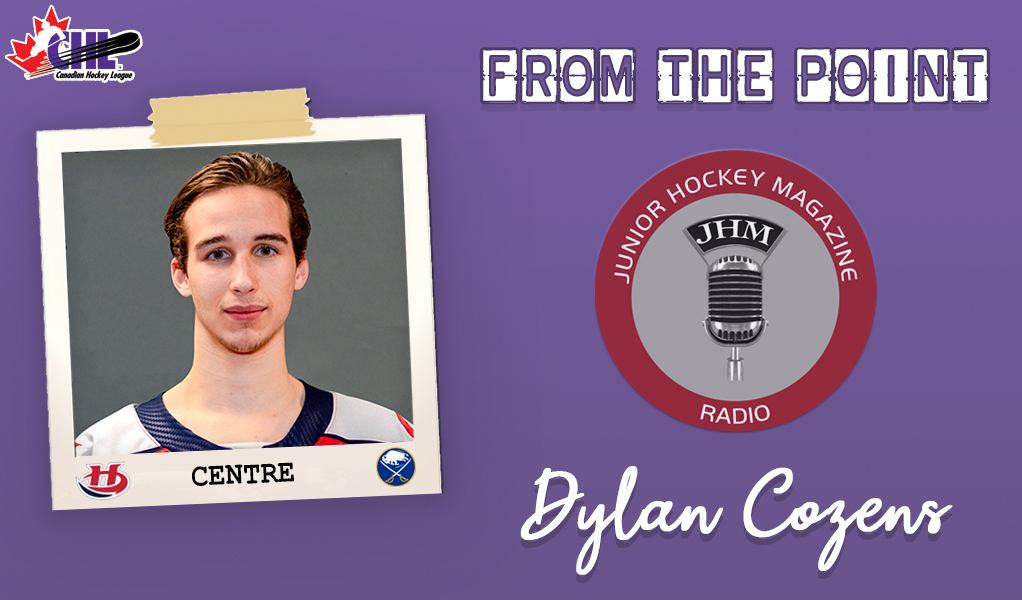 One of six returnees from last year’s gold-medal win at the World Junior Championship, Buffalo Sabres first-round pick Dylan Cozens of the Lethbridge Hurricanes sat down with Junior Hockey Magazine to discuss camp in Red Deer, what he learned from his past experience on the world stage, and what makes the annual tournament so special:

Junior Hockey Magazine: Was it a big sense of relief when you were finally able to get out of your hotel room and back on to the ice?

Dylan Cozens: It was for sure. We had already done 14 days, got back on the ice for a few days, and then had to go straight back into the hotel again. The five days went a lot quicker than the 14 days. It was a little bit of a breeze for us, but just to get back out and know that our quarantining was done was really nice and we were all super excited to be in Edmonton and the new scenery.

JHM: How do you adjust your mindset from when your body is completely shut down for that long of a period to playing probably what is going to be one of the biggest tournaments of your life?

DC: We did what we could in our rooms. We had bikes set up in our rooms, so we did what we could there, but going back on the ice, it takes a practice or two to get your lungs and your skating legs back. They have been working us really hard in these practices to get us in the best shape possible. I think we are going to be ready to go and in good shape come tournament time.

JHM: How are you different as a player now 12 months later, coming into this tournament trying to defend the gold medal?

DC: I have more confidence coming in this year. I have a bigger role too being a returning guy and it being my second year. We need to perform, but our team is really deep this year. We have lots of guys who can all play in any position so I am really excited with the team we have, but at the same time we have to stay humble and know that it is not going to be easy. Last year we faced adversity with injuries and then losing to the Russians (in the round robin). With the amount of returnees we have, we know what it takes to win and we can spread that message throughout the room.

JHM: How excited are you about your linemates Kirby Dach and Jack Quinn?

DC: I am really liking the line that we have set up right now. Kirby speaks for himself. He has played a full season in the NHL already. He is such a good playmaker, he is so smart with the puck, and protecting the puck. If you are open, he will find you. With ‘Quinner’, his shot is elite. He can bury from anywhere. He is super skilled. I think once we get on the ice against opposing teams, instead of just playing against teammates all of the time, I think our line is going to shine.

JHM: Walk me through what happened when you guys were on the ice and then, all of a sudden, Connor McDavid’s face shows up on the videoboard.

DC: Andre Tourigny, our coach, at the end of practice, told us they were going to announce the leadership group and to look up at the videoboard and that someone was announcing it. We didn’t really know but had a few ideas of who it could be, but once (McDavid) showed up, it was pretty cool to see him up there, reading my name, reading where I am from. That is pretty cool, just a guy like that with the legacy he has in Hockey Canada and what he is doing in the NHL.

JHM: After all of the effort you put in to bring you to the point where you are right now, what does it mean to you to be recognized the way you are being recognized in terms of getting a letter on your chest and someone like Connor McDavid knowing who you are?

DC: It’s all of that hard work starting to pay off. More and more, growing up as kid, this tournament is something that I wanted to play in. I got that opportunity to win a gold medal last year. To be back for another year and to wear a letter on my chest, it is a huge honour but it is also a big responsibility that I feel I am prepared for. It is pretty cool. I have to think that where I am at in my life right now, this is everything I have dreamed of as a kid and I am starting to reach my dreams so I am going to keep working and keep grinding.

JHM: What’s it like to get to know some of the guys?

DC: It was definitely different. Most years we are doing team building. Last year, we were hanging out in Vienna together, wandering this city, and this year we are getting to know each other over Zoom. It was definitely a different experience but the staff and all of the coaches did a good job of doing the Zoom meetings and bringing us closer together that way. But it is definitely nice now to be out of the quarantine and finally getting to hang out with each other at the rink and getting to know each other. I am starting to become good friends with lots of guys.

JHM: What has it been like with your family going through this experience because they can’t be around you in a great moment like this?

DC: It’s tough. They were going to come down and watch if they were able to. They got to watch the World Juniors last year, which was awesome – both my parents and my brother. That was great to have them there. But I know they will be watching from home. I’ll be able to feel their support. I have been talking to them lots. I owe a lot to them. They are the reason that I am at where I am in my life right now. They sacrificed so much so I am super grateful for that.

JHM: Was there one Christmas that stands out for you when you look back?

DC: Maybe the best one was when I came back home for Christmas in my 14-year-old season. It was first year living away from home, so just getting to go back home and be with my family. I hadn’t seen them in so long. It was just great to be back there and spend time with them. My biggest memories from Christmas are watching World Juniors and going out on my backyard rink after as a kid. Sitting on the couch watching the game and then having buddies over where we would recreate it on our backyard rink.