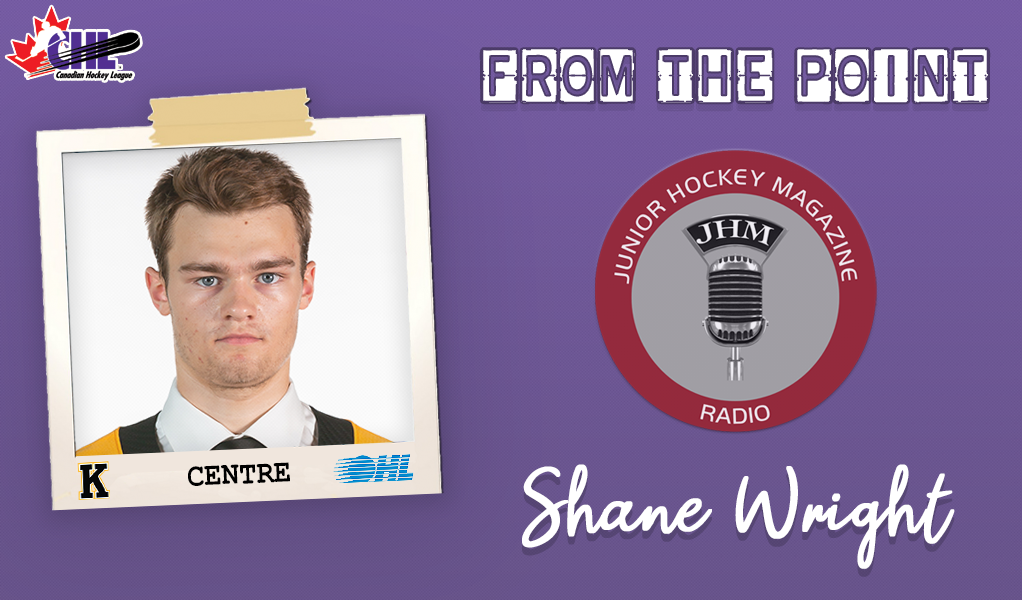 Kingston Frontenacs exceptional centre Shane Wright recently sat down with Junior Hockey Magazine to share his thoughts on his entry into the Ontario Hockey League last season, the upcoming World Under-18 Championship, and what advice he would give fellow superstar Connor Bedard:

Junior Hockey Magazine: How are you feeling right now?

Shane Wright: With the news of being named to Team Canada, I am really excited to actually be able to play a hockey game. It has been a while since I played an organized game so it is definitely something I am looking forward to. The last few months have been pretty tough. It has been a lot of training and a lot of skating and trying to stay prepared for whenever a season may start.

JHM: Give us a sense of what your rookie season was like.

SW: It was a special year for me. It was special to be able to play in the OHL that early. It was a huge honour. I think at the start I was a little nervous in trying to figure my way out in the league, but after a few games, I gained a lot of confidence that I belong there and that I can make a difference. By the end of the year, I was flying and I was playing the best hockey of my life, so overall I had a great year.

JHM: How closely were you monitoring what guys had done before you?

SW: I’d like to say I wasn’t looking at it at all but it was in the back of my mind. It wasn’t something I was trying to reach or something I was paying a lot of attention to, but as it got closer to the end of the year, it was something that came up and something that I was aware of. Just to be able to have that distinction and that honour is pretty special.

JHM: What has it been like to have to spend essentially an entire season on the sidelines?

SW: The news was shocking for us. You never expect your season to shut down and to be just cancelled like that. At the time, we thought it would be a two-week thing or maybe one month and back soon, but now it has been over a year. It has destroyed hockey all around the world and it is just awful. I wish we could get back to playing as soon as possible.

JHM: Give me a sense of what a day in your life looks like right now.

SW: A lot of working out and a lot of skating. I usually go to the gym in the morning and have an hour-and-a-half workout, get home, eat, and do all that. I skate in the afternoon for an hour and 15 minutes, then go home and do some homework or play some video games. It is pretty much the same schedule every day and not much going on right now. Just a lot of training and skating.

JHM: Are you concerned that Canada will come into the U18s slow compared to other countries?

SW: I think we will definitely be at a disadvantage but I feel that as long as we prepare properly and take all of the measures to be as prepared and as in game shape as possible then that is all we can do. There is nothing like a game and you can’t replicate that at all. We have to be as prepared as possible and doing whatever we can to stay in shape and ready to compete when that time comes.

JHM: You made an interesting purchase recently. You bought a car in a unique way. Tell me that story.

SW: Through Cam Stewart, my agent, he reached out to Paul Coffey who is a partner with Bolton Kia, and through them we were able to have a deal where I was given a car and I will be an ambassador and part of that team there. Paul Coffey is a hockey legend and it was pretty cool for me to be able to meet him and talk to him. Just to be a proud partner with them is really special for me.

JHM: How much are you thinking ahead to the 2022 NHL Draft and how early do we hear your name called?

SW: I would like to hear it as early as possible, but it is still over a year away. There is still a whole lot of hockey to be played and a lot of work for me to do. I am thinking about it. It is in the back of my mind. But that said, there is still a long way to go and a lot of stuff to do to get prepared for that.

JHM: Have you had an opportunity to speak with Connor Bedard about your experiences?

SW: I have been able to text with him and interact a little bit. He is having such a strong year. He is a special player and well deserving of exceptional status. I think for him I would just say to stay focused on yourself and what you are good at. Don’t try to be someone else or try to do someone else’s job. You are there for a reason, and you made Hockey Canada for a reason, and it is because you are a special player. Go out and play your own game and be confident.

JHM: How anxious are you to put on a strong performance at the U18s?

SW: I am really looking forward to it. I haven’t played an actual game in over a year so I am chomping at the bit to get on the ice and compete. It is a special tournament and any time you get to wear that Team Canada jersey, it is a huge honour. I am really looking forward to playing for Canada, representing my country, and playing against the best players in the world.