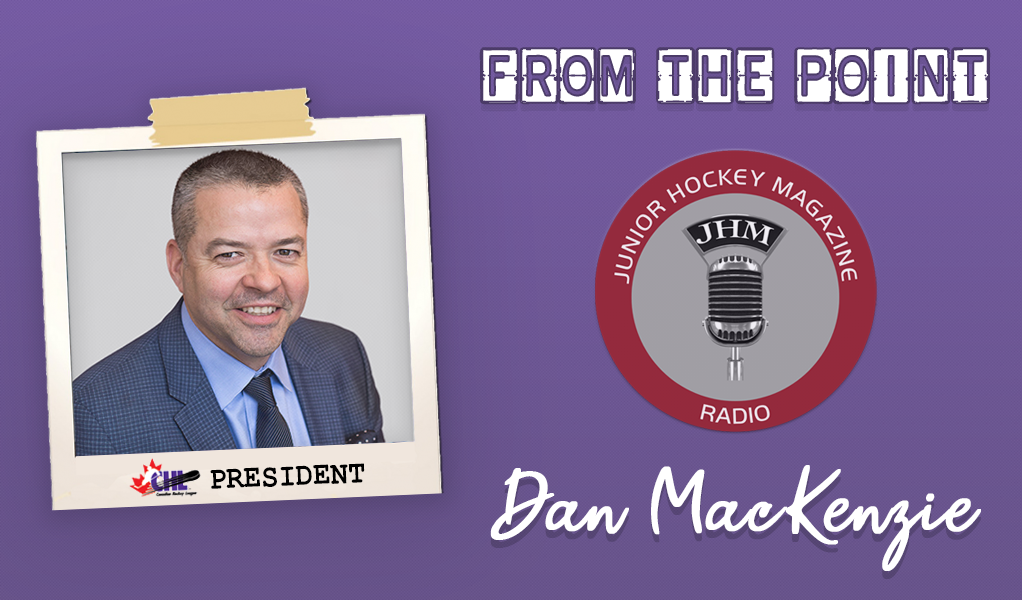 Dropping the puck on its 30th season, Junior Hockey Magazine launched its premiere episode headlined by Canadian Hockey League President Dan MacKenzie who sat down to discuss the League’s Return to Play, the importance of the upcoming World Junior Championship, as well as the critical cultural role that hockey plays in Canada:

Junior Hockey Magazine: How have you been handling this entire pandemic?

Dan MacKenzie: The last time we spoke we had to unfortunately cancel the Memorial Cup in Kelowna. That was obviously something that was very disappointing on our side. Personally, for me, it would have been a real thrill to be able to give out that trophy given its history. But at the end of the day, health and safety is the most important thing for us and that philosophy really continues for us today. I am hopeful that we are going to be in a situation that in 2021 for the Memorial Cup in either Oshawa or Sault Ste. Marie that we will be able to drop the puck on June 17. Our leagues are working really hard right now to try to put the plans in place to be able to allow us to crown a champion. That is what we are focused on.

JHM: How much contact do you have on a regular basis with the commissioners across the three leagues to see where you are at in terms of Return to Play?

DM: It’s an interesting dynamic. Myself and the three commissioners, we make up the CHL Executive Council, and we talk three times a week. The decision was made a few months ago to really touch on your question about the regional nature of our leagues. We talked about what happens if we are in a situation where the pandemic is at a certain state in one area of the country and one of our jurisdictions but different in another. How are we going to treat that? The decision was made that we are really going to lean on the regional nature of the leagues right now and let each league work through their health-care jurisdictions to try to come back to play. That is where you get into a situation in the ‘Q’ where they are up and running and working very closely with public health authorities on their Return to Play protocols. Then you have the OHL and the WHL with different start dates because they are working with different jurisdictions. It’s worked fairly well in terms of the way we have been structured and we are in constant contact and trying to learn from each other in terms of what is working in some places versus others.

JHM: In the CHL, so much revenue is generated by fans sitting in seats. Is that what has led to, say, ‘Let’s wait as long as we can to try to get as many fans into the building as we possibly can’ and then to be able to do that safely?

DM: There is no doubt that in our league that fans in the stands are absolutely critical. They make up a significant portion of the revenue at both the league and team level so that is why you see the leagues working with provincial governments and talking about fan capacity and what is going to be allowed in the buildings because it is such a critical part – not just how much the capacity is now but what the plans could look like going forward if the pandemic subsides. I think you also touched on the concept of a bubble and we have been asked that over the last few months about why we don’t just go to a bubble. I think the bubble concept works for professional leagues in terms of finishing your playoffs, and it works for Hockey Canada who is moving to a bubble for the World Junior Championship, where it is a very tight window. In our case, given that our players are not professionals – they are amateur student-athletes – where they are in school, they’re in the community, they’re being billeted, a bubble doesn’t work with our model so that leaves us to work with the provincial or state governments of the jurisdictions where we play to see if we can get Return to Play protocols approved that satisfy provincial health authorities but also allow us to play.

JHM: There was some pushback from Ontario’s Minister of Sport suggesting that if the OHL did come back in early February, under the current situation with the pandemic, they would try to prevent body contact, to which Ontario Premier Doug Ford stepped up and said let’s put a hold on that. How much are you in discussions with these bodies that if you are able to come back and play that these are the parameters and the way we want to be able to play otherwise it is not the OHL?

DM: Those discussions would be done at the regional level with OHL Commissioner David Branch. He would be having those discussions directly with the Ontario government. They are ongoing. There are a variety of elements to coming back to play that are in discussion right now. Those discussions need to progress. We’re still in the middle of them. We look forward to seeing where they ultimately end up but I think the goal of everybody is to try to find a way to have the 17 clubs in Ontario being back to play.

JHM: Has it struck you that the insatiable appetite this country has for hockey, even in a time of this international pandemic, that people just crave to see hockey back on the ice and the role that the CHL can play in that it is somewhat of a distraction and a source of entertainment during a really difficult time?

DM: Absolutely. Part of it is that it is just in our DNA. The leaves start falling, the weather gets cold, and your mind moves to hockey. It’s part of what this country is all about. In our league, when you look at the 52 Canadian markets where the CHL has clubs, we are the No. 1 sport and entertainment property in 85 percent of the places where we play. So if you live in one of those communities, it’s what you do. On a Friday night, you go to a hockey game, you see your friends, your neighbours. The arena is not just a place to watch the game but it is also a place to have public discourse and get connected to your community. Our teams do so much good work in their communities and those are all the things that I think people are missing and craving right now. It is about being on the ice but it is also about the great things that happen off the ice.

JHM: How important is the World Junior Championship being played in Edmonton as a national showcase where you have millions and millions of people watching at that point, and a lot of these kids are not only representing Canada but also all the other international teams, that as soon as that tournament is done, they will be ready to continue to play at the major-junior level? How important is it to send out that message during that Christmas break to fans that loved the World Juniors that it is going to continue when it opens up in the WHL and OHL? How important is it for your organization to jump on that and carry that momentum into the latter part of the season?

DM: It’s going to be critically important. One of the other elements of the planning that we have been doing is we have also been in close contact with Hockey Canada. We have been having weekly calls with Tom Renney, Scott Smith, and that group at Hockey Canada about their plans on the World Juniors. As you lay out, it’s really important from a momentum perspective, a training perspective, and a development perspective that once the World Juniors are over that those players can go off to their clubs. Hockey Canada has done a great job and I think one of the key things that was so exciting was their ability to secure this year’s championship in the bubble format. They learned a ton about what happened with what the NHL experienced in Edmonton. But also to be able to preserve the opportunity to host next year and hopefully by then we will be in a situation where we can have a true fan experience like we are all used to. That is pretty exciting that they were able to work with the IIHF to make that happen. I can’t wait. It’s going to be a lot of fun to see how that tournament plays out.