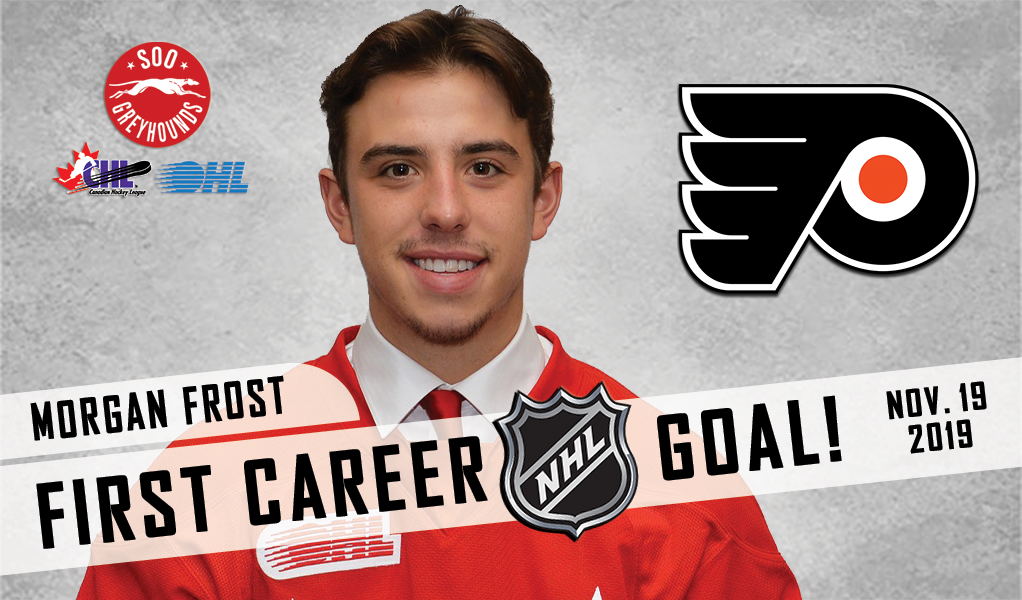 Morgan Frost wasted little time getting his name on an NHL scoresheet.

Recalled from the American Hockey League on Monday, the Soo Greyhounds graduate made his NHL debut the following night, sharing a line with fellow CHL alumni Claude Giroux (Gatineau Olympiques) and Travis Konency (Sarnia Sting). In all, it took just a period-and-a-half of play before Frost found the back of the net in his first NHL contest as he walked in from the corner and slipped a backhander above Florida Panthers netminder Sergei Bobrovsky.

“I was kind of low in the ‘D’ zone, to be honest, and (Konecny) made a really nice pass and I saw a bit of room,” Frost told reporters following his NHL debut. “At first I was looking (to) pass but then I saw I had a lane to the net. I think the goalie put his stick out so I just tried to go short side with it and luckily it went in.”

Frost joins the Flyers after beginning the season with the club’s AHL affiliate, the Lehigh Valley Phantoms, where through 16 appearances he had recorded five goals and seven assists for 12 points. It marks his first pro campaign after spending the past four seasons with the OHL’s Greyhounds, including 2018-19 when he led the team in scoring with 109 points counting 37 goals and 72 assists across 58 appearances to finish tied for third in league scoring. Across four OHL seasons, the Aurora, Ont., native tallied 106 goals and 204 assists for 310 points in 257 career contests.

“He played a good game. There was definitely a lot of good plays with the puck that he made for us,” added Flyers head coach Alain Vigneault. “A young player getting his first kick at the NHL, he’s obviously going to remember this game, and he scored a goal for us too.”