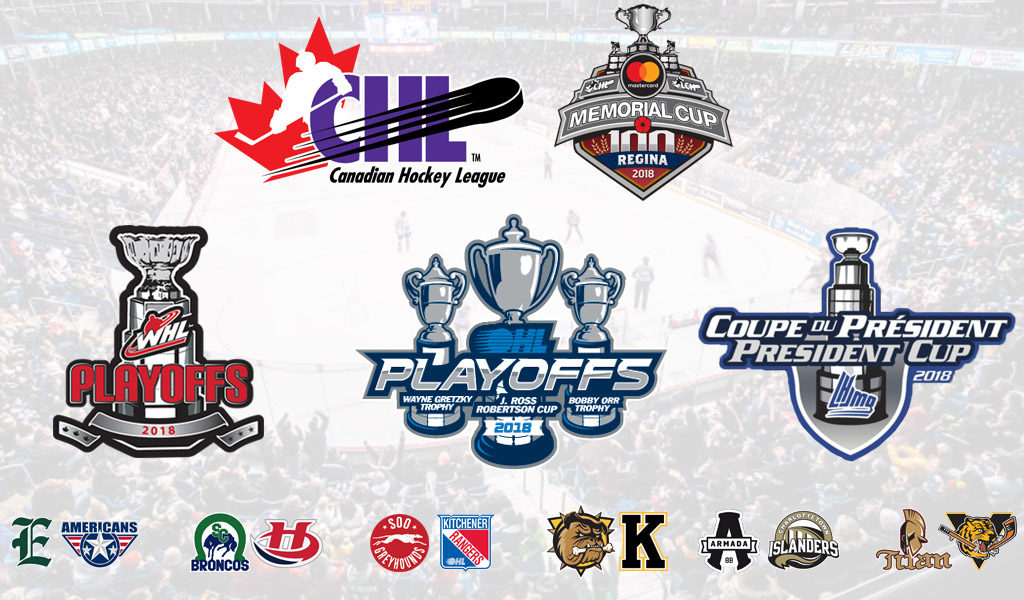 Twelve teams remain on the road to the 2018 Mastercard Memorial Cup, taking another step toward the centennial celebration of the CHL’s annual Championship with second round playoff victories.

Nine of the twelve teams still in contention have never hoisted the prestigious trophy, making for intense semi-final battles in the WHL, OHL and QMJHL starting this week.

The Hamilton Bulldogs and Kingston Frontenacs get things started on Wednesday, squaring off in the OHL’s Eastern Conference Championship Series in a rematch of last year’s first round seven-game showdown that saw the Frontenacs advance on Linus Nyman’s overtime winner.

The Frontenacs reach the OHL semi-final for the first time since 1993 and continue to chase the first championship in the franchise’s 45 year history but face a stiff challenge in the Eastern Conference’s first-place Hamilton Bulldogs.

After the club’s first ever playoff series victory over Ottawa, Hamilton proceeded to eliminate the Niagara IceDogs in five games and now looks to exact revenge on a Kingston club that gave them a good challenge during the regular season. Five of the six meetings between the two clubs were decided by one goal, with four requiring overtime or a shootout.

In the OHL’s Western Conference the CHL’s top-ranked Sault Ste. Marie Greyhounds get back to work following a wild 9-7 win over the Owen Sound Attack in Game 7. The Greyhounds rebounded from a 7-1 loss in Game 6 but the win wasn’t without a third period scare that saw Owen Sound score five times in the final 20 minutes.

Sault Ste. Marie lines up against the Kitchener Rangers after they bounced the Sarnia Sting in six games. Ottawa Senators prospect Logan Brown (3-18–21) wrapped up the second round as the leading scorer of the OHL Playoffs as his line alongside Kole Sherwood (10-7–17) and Adam Mascherin (6-11–17) has been one of the league’s most consistent offensively.

The Western Hockey League also featured a Game 7 finale as the Swift Current Broncos recovered from a triple-overtime loss in Game 6 to dominate the cross-province rival Moose Jaw Warriors 6-0 on the road. Calgary Flames prospect Glenn Gawdin had two goals and two assists while goaltender Stuart Skinner posted a 25-save shutout to lead the Broncos to their first Eastern Conference Championship Series appearance since 2001.

Swift Current will face the Lethbridge Hurricanes who boast an 8-2 playoff record following a five-game series triumph over the wild card entry Brandon Wheat Kings. The Canes return to the conference final after being eliminated by the Regina Pats last spring. Overage veteran Brad Morrison (12-17–29) leads the WHL Playoffs in scoring while Pittsburgh Penguins prospect Jordy Bellerive (8-10–18) has also been dangerous. Lethbridge faces a big challenge after dropping three of four decisions against Swift Current this past season. The Canes took the latest decision by a score of 5-2 on February 2nd.

On the west coast a pair of American combatants go head-to-head as the fine goaltending of Philadelphia Flyers prospect Carter Hart has backstopped the Everett Silvertips to the conference final where they’ll face an upstart Tri-City Americans club.

Hart’s work throughout the playoffs has resulted in a 1.92 goals-against average, .944 save percentage and two shutouts over 10 games. While known as a solid defensive team, Everett has been fuelled by production from fifth-year overage veteran Patrick Bajkov (7-8–15) and Washington Capitals prospect Garrett Pilon (6-8–14) who helped them get past the rival Portland Winterhawks in five games. The ‘Tips are into the Western Conference Final for the first time since 2006 after losing out in the second round in each of the past three seasons.

A wild card entry, Tri-City has been the story of the WHL Playoffs thus far, taking clean sweeps over both Kelowna and Victoria thanks to outstanding play from stars Morgan Geekie (15-9–24), Michael Rasmussen (10-14–24) and CHL Player of the Week Jake Bean (1-13–14) on the back end. The Americans beat the Silvertips by a score of 4-2 in their most recent meeting on March 13th.

While Tri-City has been the surprise of the west, the Charlottetown Islanders are turning heads in the eastern-most reaches of the country.

After going down in five games to the Blainville-Boisbriand Armada in the QMJHL Semi-Finals last spring, the Isles will have a shot at redemption as they square off against the league’s first place club in third round action. Charlottetown eliminated the Quebec Remparts in seven games before sweeping a talented Halifax Mooseheads club in the second round. Goaltender Matthew Welsh has been steady when called upon with a .921 save percentage over 11 games while Charlottetown’s power play has been among the league’s best having gone 11-for-32 (34.4%). The Islanders have spread the scoring around as Pascal Aquin (8-5–13), Keith Getson (9-3–12) and Nikita Alexandrov (6-7–13) have frequented the scoresheet.

After going wire-to-wire atop the QMJHL standings, Blainville-Boisbriand has kept right on rolling in the postseason with a sweep of the Val-d’Or Foreurs and a five-game triumph over the Moncton Wildcats. The Armada has outscored opponents 50-19 through the first two rounds as Ottawa Senators prospect and Canadian World Junior standout Drake Batherson (6-12–18) leads the QMJHL Playoffs in scoring.

The second-place Acadie-Bathurst Titan are into the Semi-Finals for the first time since 2006 as they chase their first championship since 1999. Reigning Vaughn CHL Goaltender of the Week Evan Fitzpatrick has been outstanding, posting a 1.79 goals-against average and .930 save percentage over 10 contests to help the Titan get by the Chicoutimi Sagueneens and Sherbrooke Phoenix. As was the case all season for Acadie-Bathurst, the blue line has continued to produce as standout Olivier Galipeau (3-7–10) has 10 points in as many games while Adam Holwell (3-3–6) has also been a factor.

The Victoriaville Tigres will matchup against Acadie-Bathurst starting Friday night on the road after they eliminated the rival Drummondville Voltigeurs in five games. With veteran overage netminder Etienne Montpetit as the last line of defence, the Tigres are playing good hockey at the right time as they’re led in scoring by back-to-back 100-point scorer Vitalii Abramov (7-6–13). Russian linemate Ivan Kosorenkov (3-9–12) has also been an offensive presence while crash-and-bang winger Maxime Comtois (3-4–7) keeps opposing defenders on their toes.

The 2018 Mastercard Memorial Cup is one month away as the host Regina Pats await three opponents to emerge as champions of their respective leagues.

Here’s a look at the CHL playoff picture entering round three.