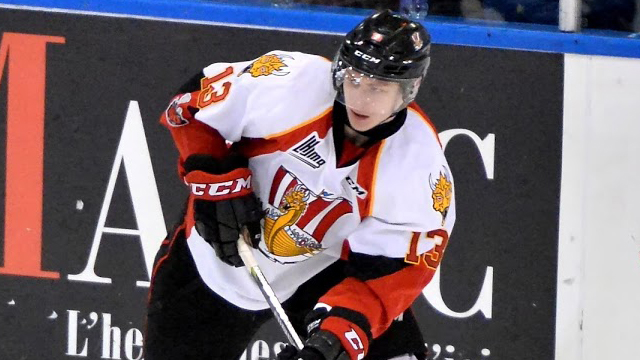 Toronto, ON – The Canadian Hockey League today announced that San Jose Sharks prospect Ivan Chekhovich of the Baie-Comeau Drakkar is the CHL Player of the Week for the regular season week ending October 28 after scoring five goals and three assists for eight points in three games with a plus-minus rating of plus-3.

Chekhovich began the week in style delivering his second five-point performance of the 2018-19 season which included a hat-trick and two assists as first star of Wednesday’s 6-5 shootout victory over the Quebec Remparts.  On Friday night he contributed a first period goal as part of another shootout victory for the Drakkar, this time against the Chicoutimi Sagueneens by a 4-3 score to open the rivalry week home-and-home series.  The Drakkar also emerged victorious in Saturday’s rematch in Baie-Comeau by a 4-1 score with Chekhovich netting a goal and an assist while earning third star honours.  The three-game win-streak lifted the Drakkar back into first place in the QMJHL’s overall standings with a 12-3-0-1 record.

A 19-year-old from Yekaterinburg, Russia, Chekhovich is playing in his third QMJHL season with the Drakkar since joining the club as the third overall selection in the 2016 CHL Import Draft.  Through 16 games his 10 goals and 14 assists give him 24 points which ranks tied for fifth overall in the QMJHL.  The seventh round pick of the Sharks in 2017 is expected to compete in the 2018 CIBC Canada Russia Series representing his country against Team QMJHL November 13 in Sherbooke and November 15 in Drummondville.