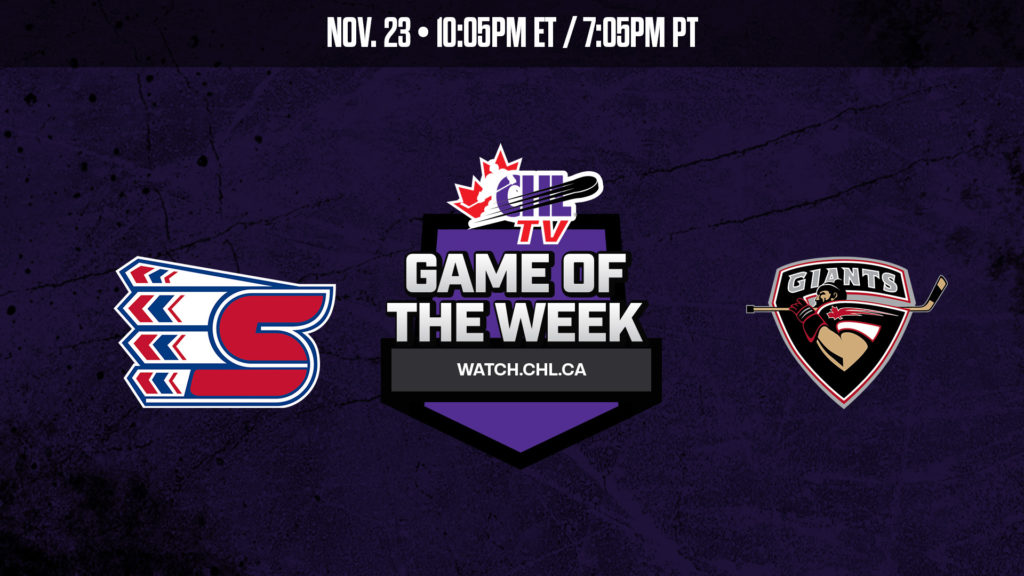 Two WHL Western Conference teams meet tonight in the CHLTV Game of the Week as the Spokane Chiefs (4-13-1) host the Vancouver Giants (7-9-4).

The rebuilding Chiefs have seen nine skaters 17 or younger play at least 10 games this year and thus far, to good results. Berkly Catton, who represented Canada Red at the recent World U17 Hockey Challenge, has starred early offensively alongside veteran Chase Bertholet.

Spokane has struggled to keep the puck out of the net — their 101 goals against are tied for the second most in the WHL — but newly acquired Dawson Cowan impressed with a 54-save performance Saturday in his first start for the team after a trade with Winnipeg.

Vancouver has dropped its last two contests but before that, had put together a 3-0-1 run that propelled them into a Western Conference playoff spot.

The Giants have scored just 60 goals in its 20 games but the offence is led by the trio of Samuel Honzek, Zack Ostapchuk (OTT) and Ty Thorpe, all of whom have passed the 20-point mark this season.

In 13 games with the Chiefs, the 16-year-old has four goals and 12 points. The Saskatoon native also represented Canada Red at the 2022 World U17 Hockey Challenge where as captain he won a silver medal and was named to the U17 WHC All-Star Team after he had 12 points (three goals) in seven games.

Catton is eligible for the 2024 NHL Draft.

Speaking of the NHL Draft, Honzek has starred thus far for the Giants. The 2023 prospect leads the team in goals (13) and points (29) in his first WHL season. Among qualified rookies, the Slovak forward leads all CHL rookies in scoring.

The Giants’ franchise record for points in a season by a rookie is 60, a mark set by Gilbert Brule in 2003-04. Last month, Honzek was given an ‘A’ rating by NHL Central Scouting and is considered a candidate to be selected in the first-round of the 2023 NHL Draft.

Bertholet has 23 points thus far for the Chiefs to lead the team in that category as he looks to best a career-high 58 points a season ago.

Ty Cheveldayoff’s nine goals, four of which have come on the power play, leads Spokane while his 16 points are second most on the squad. In all, the Chiefs have seven players who have reached double-digit points this season.

Thorpe and Jaden Lipinski each have four power play goals while Mazden Leslie’s 19 points from the blue line are tied for the 11th most among WHL d-men.