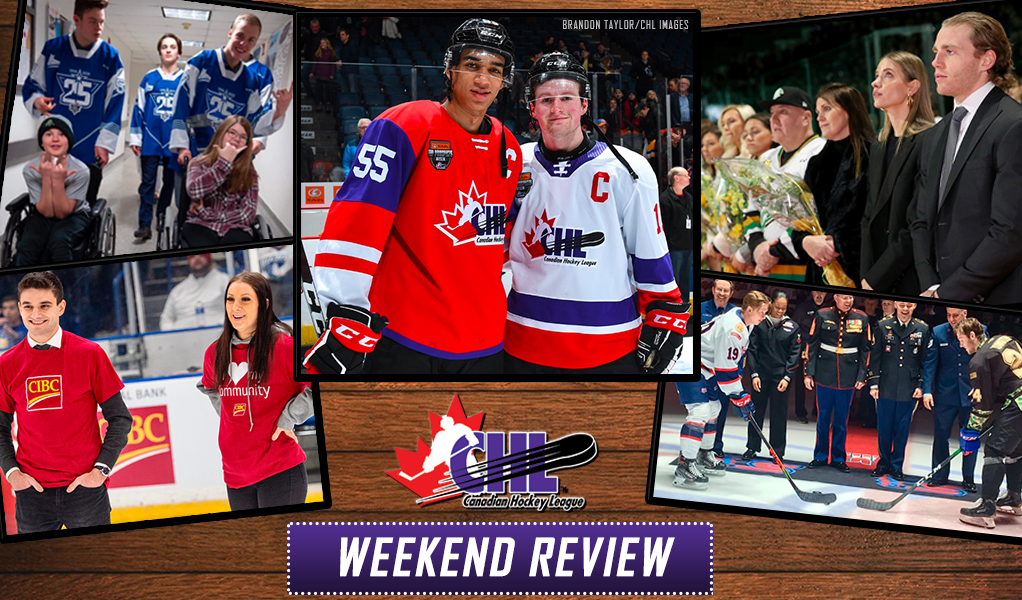 All eyes were on Hamilton for the Kubota CHL/NHL Top Prospects Game where 40 of the league’s top NHL Draft eligible players put on quite a show.

While the next wave of NHL Draft talent took centre stage in a busy week across the CHL, there was plenty more on and off-ice action from coast-to-coast.

Here’s a look back at that and more news and note from around the league.

More than 6,400 seats were filled at FirstOntario Centre on Thursday night for the 25th annual NHL Draft showcase of the CHL’s top prospects.  With all eyes on captains Alexis Lafreniere and Quinton Byfield, it was forward Tyson Foerster who emerged as the surprise star scoring twice with an assist to lead Team White to victory.

A great night in Hamilton with @KubotaCanadaLtd and @BulldogsOHL hosting top ranked #CHL talent in our 25th annual #NHLDraft showcase.

The Game: All eyes on Hamilton

The Top Prospects Game wasn’t the only show in town over the weekend as the community of Ancaster, near Hamilton, hosted Rogers Hometown Hockey.  Three more CHL cities will welcome tour stops in 2020, including Ottawa (Feb. 9), Quebec City (Feb. 16), and Edmonton (March 29).

"It was so special because you'd get to come into Hamilton and skate with all the guys going off to OHL or NHL camps and they were so inclusive."

2x Stanley Cup Champ and @CityofHamilton native, Marty McSorley joined us in Ancaster to reflect on growing up in the area & more. ⬇️ pic.twitter.com/Sc2D3QOg38

Patrick Kane made the most of his single season in the CHL earning Rookie of the Year honours in 2006-07 with 145 points including 62 goals and 83 assists in 58 games for the London Knights. He was honoured by the club on Friday night with a ceremony that raised his iconic #88 to the rafters at Budweiser Gardens. The first overall pick in the 2007 NHL Draft has won three Stanley Cups as a member of the Chicago Blackhawks and capped an eventful weekend with his 1000th career NHL point.

Thank you @GoLondonKnights for a night my family and I will never forget pic.twitter.com/ISWkFZ2USE

It was a big night for @NHLBlackhawks forward @88PKane as the @GoLondonKnights retired his number. The banner raised honored his ridiculously productive 2006-07.https://t.co/ESUnrKQXcA

The Vancouver Giants added Scott Bonner to the team’s Wall of Honour on Friday night. Bonner was the first General Manager in Giants history and held the position for 15 seasons (2001-02 through 2015-16) which included a 2006 WHL Championship, 2007 Memorial Cup, and five straight B.C. Division banners from 2006-10.

Thank you Scott Bonner for your many positive contributions to the legacy of the Vancouver Giants. We are thrilled to have you join the Wall of Honour this evening. @TheWHL @TSC_Hockey pic.twitter.com/FBJoa3w4WX

The Official Bank of the CHL is celebrating with communities from coast-to-coast with a series of 23 game nights that include the popular ‘Hit Your Goals’ on ice promotion that rewards one lucky fan the opportunity to win $500.

#BladeCity! Thanks for coming out last night and making this year’s @CIBC Hit Your Goals Night spectacular. We’ll see you next time! #BeatTheBroncos pic.twitter.com/e5Y4wuDcZp

The Edmonton Oil Kings were the first of 17 Canadian clubs in the WHL to sport special edition Hockey Night in Canada inspired sweaters as part of the league’s third ‘Suits Up’ campaign in partnership with RE/MAX and in support of the Kidney Foundation. The first two years of the event has raised more than $460,000 through local jersey auctions.

GAME DAY!@TheWHL Suits Up to Promote Organ Donation presented by @REMAXca is tonight! Join us for a 7pm puck drop on the Prince Albert Raiders at @RogersPlace! #allhail

It was a special moment for the Smith family on Saturday night in Spokane where Chiefs defenceman Ty Smith lined up opposite brother Zack for a ceremonial face-off. Ty, who recently won gold with Canada at the World Junior Championship is in his fourth WHL season, while Zack is currently enjoying his rookie campaign as a member of the Regina Pats. Bragging rights went to Ty and the Chiefs who skated to a 6-2 victory.

How’s this for a sibling rivalry?@NJDevils prospect Ty Smith faces off against his younger brother Zack before tonight’s game! pic.twitter.com/qiX6id7YDG

Battle of the Billet Brothers

Another set of brothers went head-to-head on Saturday night in Peterborough with a unique twist. Petes captain Zach Gallant billets with the Deline family whose son Ty is a member of the Flint Firebirds. Gallant and the Petes spoiled the homecoming defeating Ty’s Firebirds 2-0 in what was certainly a special night for the Deline family.

Calgary Hitmen captain Mark Kastelic became the latest CHL veteran to play in his 300th career game. His WHL tenure has been played entirely with the Hitmen where he’s amassed 207 points including 109 goals and 98 assists.

A huge milestone for the captain!! 🙌

Big congrats to Mark Kastelic on playing in his 300th career WHL game tonight! Kasty is the seventh player in franchise history to reach the milestone! #25Together pic.twitter.com/KR14MToaPO

Memorial Cup champion Mario Pouliot adds another milestone to a decorated coaching career reaching the 500 games mark. Now in his second year with the Rouyn-Noranda Huskies, Pouliot became the first coach to win two-straight Memorial Cups with different teams after leading the Acadie-Bathurst Titan to glory in 2018.

Sarnia Sting captain Ryan McGregor also reached an impressive milestone over the weekend by playing in his 268th career OHL game which sets a new franchise mark. During his five-year stretch in Sarnia he’s produced 208 points including 80 goals and 128 assists.

With the drop of the puck, @ryanmcgregor84 moves into sole possession of first place for games played in franchise history.

Several more clubs have announced changes to their leadership groups following trade deadline activity. The Lethbridge Hurricanes awarded the ‘C’ to co-captains Ty Prefontaine and Dylan Cozens, Conner Bruggen-Cate is the new captain of the Seattle Thunderbirds, Ethan Sakowich was appointed the honour by the Red Deer Rebels, and Jaxan Kaluski will now lead the Swift Current Broncos.

The #WHLCanes have named Ty Prefontaine and Dylan Cozens as Co-Captains for the remainder of the 2019-2020 season! They become the 27th and 28th Captains in franchise history! #CaneTrain #FueledByPassion #YQL

NEWS: The Broncos have announced their new leadership group, with Jaxan Kaluski named the 33rd captain in Broncos history.

Caring for the Community

Off-ice highlights from around the CHL in the community included the Rimouski Oceanic visiting their local hospital, NHL Draft prospect Cole Perfetti of the Saginaw Spirit making new friends in the pediatric intensive care unit at Covenant Saginaw, and the Prince George Cougars who made a special announcement in partnership with Autism BC to provide sensory kits at all home games.

Taste of the Pros

The Flint Firebirds took advantage of a recent trip to the nation’s capital to see what life is like for the Ottawa Senators. Sens coach DJ Smith won a Memorial Cup championship with the Oshawa Generals in 2015 with a staff that included current Firebirds bench boss Eric Wellwood.

Thanks to the @Senators and #Sens Head Coach D.J. Smith for giving us a tour of their facilities at the @CdnTireCtr today!

The gold medal accolades continued for Canadian World Junior hero Akil Thomas who recently attended a Toronto Raptors game and was saluted by his hometown.

Got a gold medalist in the house 🥇@AkilThomas2 | #WeTheNorth pic.twitter.com/JqCmorxjSX

The Youth Olympics are underway in Switzerland with Canada’s men’s hockey team offering a glimpse at the future of our game. 2019 first overall WHL Bantam Draft pick Matthew Savoie of the Winnipeg ICE was recently named captain, while alternates Adam Fantilli and Tristan Luneau are top prospects for the 2020 OHL Priority Selection and the QMJHL Entry Draft. Canada will face the United States in Tuesday’s Semifinal.

#YouthOlympics | Team 🇨🇦 to be led by: